Strong lithium prices and rising concern in the US about a looming shortage of the key battery metal mean excitement is building around Bradda Head’s San Domingo lithium hard rock deposit outside Phoenix, Arizona. 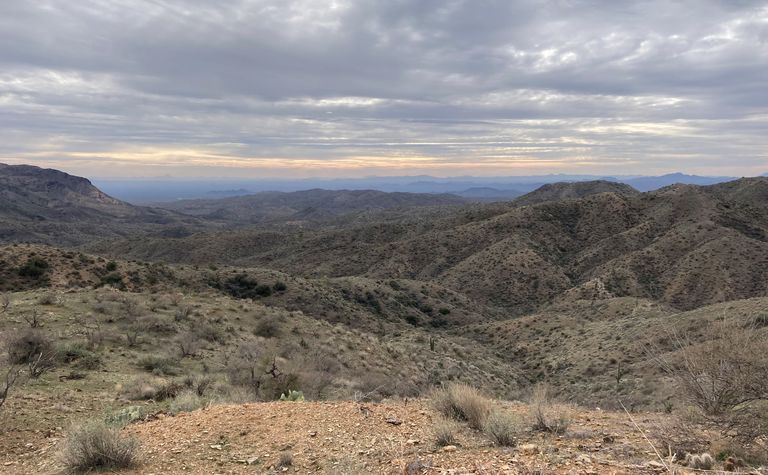 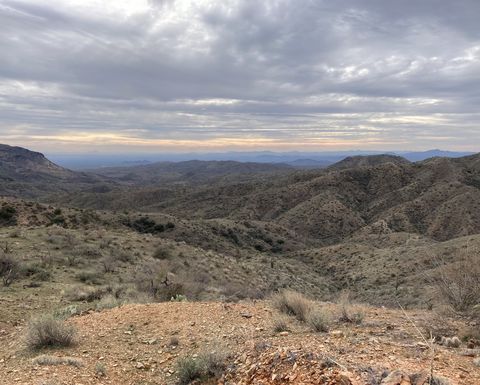 The project is one of a number held by the London and Toronto-listed junior in a portfolio also featuring sedimentary and brine deposits - all located in the southwestern United States.
But it is the hard rock - or pegmatite - asset which Bradda Head CEO Charles

FitzRoy sees as a potential game-changer.

"That's what's really going to differentiate us from the other clay juniors. A lot of the clay guys have some good projects of good size and resource and they're moving forwards, but we've got, potentially, a viable pegmatite. If we demonstrate we've got the size and scale there we need, we're going to get in production much quicker than some of the clay projects up in Nevada," FitzRoy told Mining Journal.
"Pegmatites are a proven technology; they're understood very well. It's smaller capital costs; all these things which make it easier for us, as a junior, to get into production and get funded. The clay assets are great, but they're still developing the technology, and you need higher capex. So that's why the pegmatites for us are really the game changer, and we're really excited," he added.
Bradda Head is set to complete a 30-hole diamond core drilling programme at San Domingo in the January quarter, after which the company will design a follow-up programme. FitzRoy said the plan was to start a preliminary economic assessment "as soon as we can", subject to the success of the current drill programme.
While San Domingo may prove to be the jewel in Bradda Head's lithium crown, the company has made promising strides of late with its clay - or sedimentary - assets, particularly the Basin project - also located in Arizona. The company updated its mineral resource estimate (MRE) for Basin East at the end of March, which signalled a 65% increase in contained lithium carbonate equivalent (LCE) tonnes.
The exploration target across the entire Basin project now equates to 1-6Mt of LCE. FitzRoy said the company planned to publish a further updated MRE for Basin by the end of the year.
While all the company's projects are at an early stage, FitzRoy is keen to plan ahead. A timeframe of around five years for the brine and clay projects was realistic, he said, while San Domingo would hopefully come online "slightly sooner".
A processing plant close to San Domingo would make sense, especially as other miners in the area may be interested in a potential pooling of resources. "We have neighbours nearby who might be keen to push forward with these sorts of discussions," FitzRoy said. 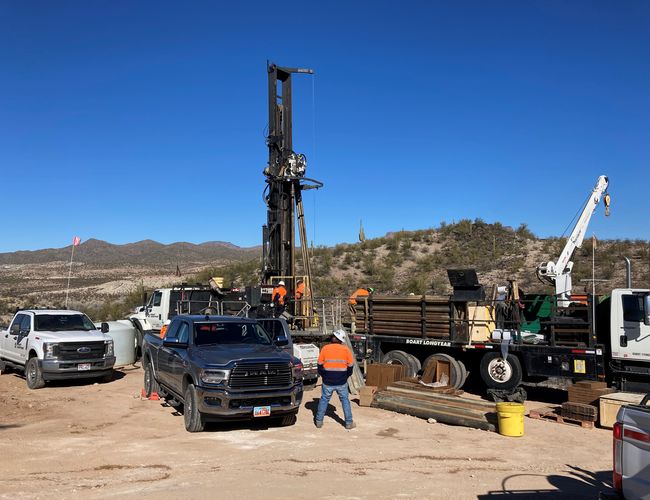 Sonic drilling at Basin
Cashed up
Bradda Head is well placed financially, having raised £9.88 million via a pair of placings in the UK and North America in April. "Our cash gets us to the end of next year," FitzRoy said. "It depends what we spend it on and obviously depends how things go. But we've got enough funds to be able to do our drilling on our pegmatites and drill the clays."
The company also has more funds to draw on courtesy of a royalty deal struck with Lithium Royalty Corp in December 2021. The staggered deal saw Bradda Head earn US$2.5 million on signing, with further tranches of $2.5million and $3million to follow should the company obtain a 1Mt LCE, and 2.5Mt LCE resource respectively across its Arizona clay claims.
Following the updated Basin MRE this quarter, first order of business in 2023 will be a further resource update for the asset - likely in the January or March quarters - along with results from San Domingo.
Moreover, the company is poised to drill on its brine assets in Nevada, while it will shortly release more information about additional brines in Texas and Pennsylvania. "We're just in the process of strengthening [them] up before we start speaking to the market about it," FitzRoy said. 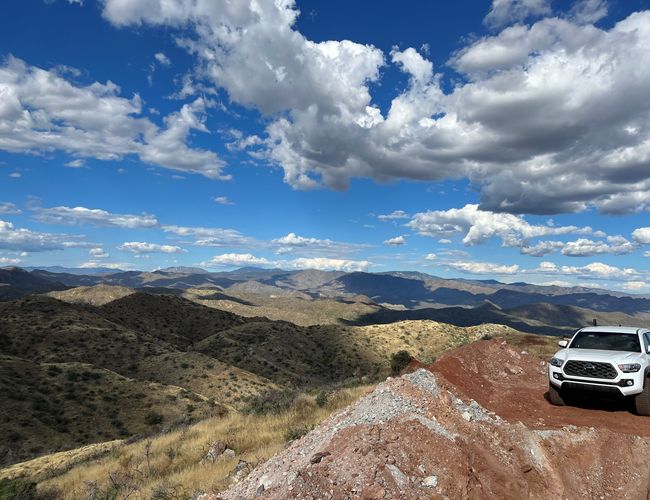 Further down the line, one key risk for juniors looking to get projects off the ground in the US is the laborious permitting process.
FitzRoy said the company had built a strong relationship with local permitting offices and noted there had been no issues so far in securing drilling permits. However, he conceded that moving towards permitting a mine would represent a different proposition.
"We are working with an environmental consultancy on water conservation initiatives," he said. "We're also doing a baseline study and a lot of things will come out of that baseline study: ways we can help with alien plants, for example. There are a lot of initiatives in place in Arizona where removing alien plants, which are not helpful for water, is a big thing."
Engagement with local stakeholders has also been a priority, with the company unveiling a community website mid-November to provide a direct link to host communities surrounding the company's projects. "Our aim is to ensure all local stakeholders are kept updated on our activities and have an effective way to communicate with us," FitzRoy said.
With questions already being raised about the environmental impact and carbon footprint of lithium projects in Latin America and Africa, FitzRoy believes his company's geographical focus and strong ESG credentials will prove highly beneficial.
"Another key thing is making sure you have a carbon footprint as low as possible, because while the market wants lithium, we are moving into a greener economy whereby everything will have a carbon footprint content and having that carbon footprint assigned to it, you're going to get a premium for your lower carbon footprint lithium," he said.
"Comparing a project in somewhere like Africa with a North American project - if you're producing and then shipping it all around the world to process it, who knows what energy mix is going into that production?
"I think there are a lot of things that separate us from other projects around the world, but one big element is our location and that we will be processing it in the US for the US end market, together with the fact that we're going be working towards keeping that as low a carbon footprint as possible," he said. "And that premium will be assigned to projects with that element to them." 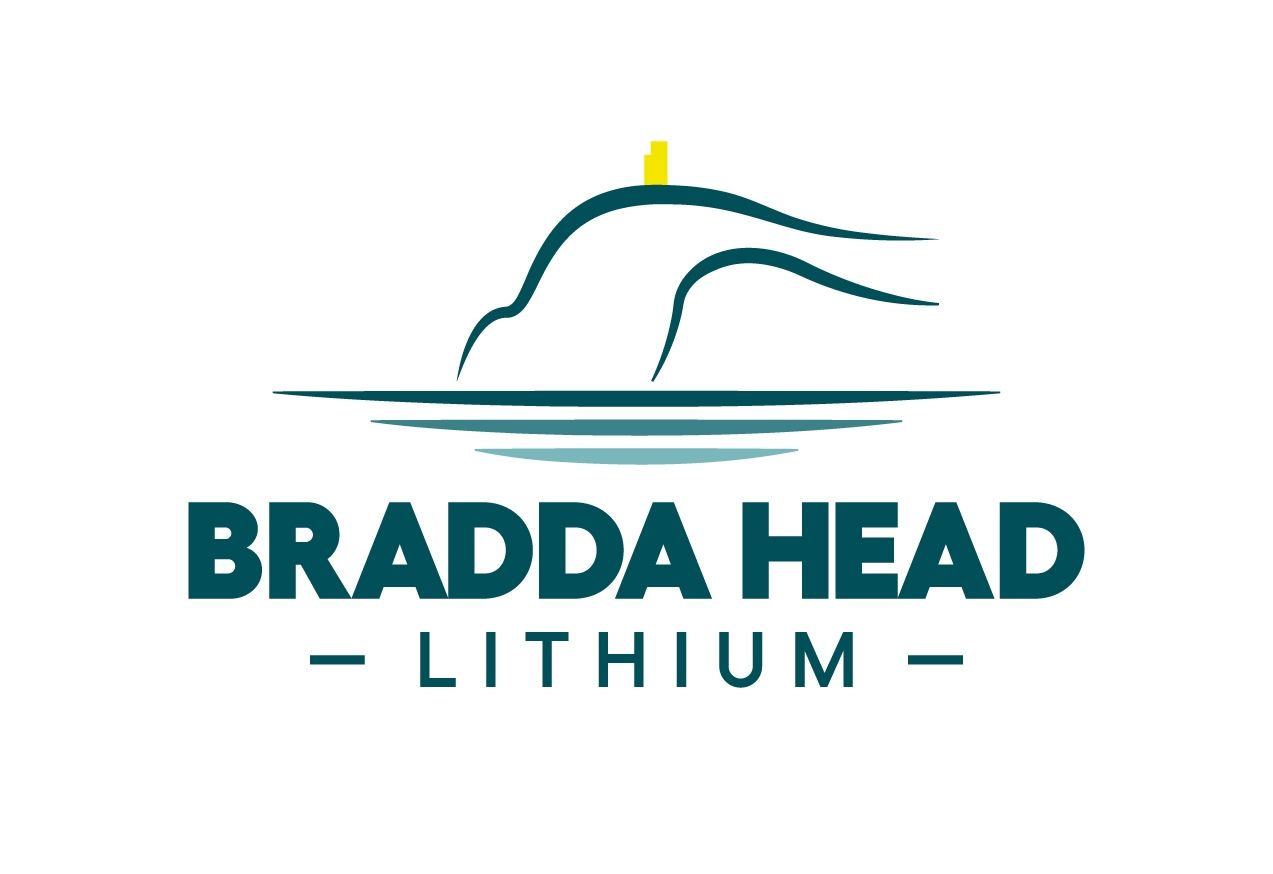 US lithium hopeful to float in London

Jervois keeps the faith on cobalt