Phoenix set to rise on Mackay's Mine Hill

A strong revival of exploration and development in some of America’s historic mineral belts is giving investors hot new opportunities in old mining centres. Phoenix Global Mining, with its prime copper and cobalt real estate in Idaho, is at the forefront of the resurgence – epitomised by the five drill rigs now turning on Mackay’s Mine Hill. 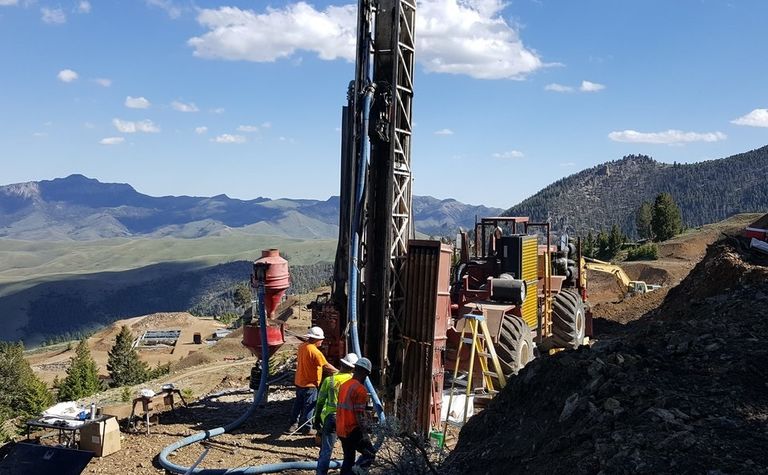 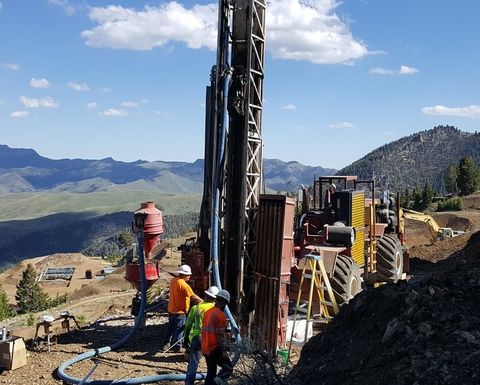 Phoenix has five drill rigs active at Empire in Idaho

The AIM-listed company (PGM), run by an experienced management team with a history of developing and financing projects, is working on the bankable feasibility study (BFS) for its planned Empire openpit copper project, near Mackay in Custer County.

The 12,100m drilling programme, including resource upgrade and pit step-out activity, and a maiden campaign on key ground along the northern boundary of the projected pit, will give Phoenix critical information to refine its early mining and processing plans, and potentially start the almost inevitable resource growth expected to come from wider drilling in the under-explored district.

Phoenix says the initial drilling on Horseshoe block, ground secured only last year, is in an area with mining history but no previous drilling - not an uncommon scenario at these historic fields. Past production of high-grade copper and zinc from underground stopes, including from skarnified limestone-hosted chalcopyrite and galena at the old Horseshoe mine, occurred up to 1979.

As with the rest of its campaign, Phoenix's Horseshoe drilling will include RC and HQ diamond holes.

A strong partnership forged with Montana-based AK Drilling has given Phoenix the drilling horsepower it needs to complete an intensive field season ahead of next year's scheduled delivery of the BFS, even as utilisation of available fleets surges across the region. Phoenix CEO Dennis Thomas says the drilling aimed at expanding and upgrading (inferred) Empire surface resources, providing metallurgical samples, and completing geotechnical and hydrological assessments, will keep the company on a fast track to delivery of the BFS in the second quarter next year and, all going to plan, production in 2020.

"This [big drilling fleet] allows us to dovetail a step-out and exploration drilling programme using the same rigs as they complete the feasibility work on the Empire Mine," he says. 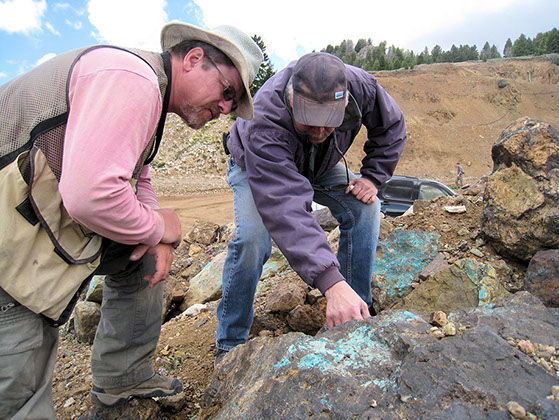 "We are confident that we can continue to build value for shareholders by drilling for additional copper resources through stepping out at the openpit and putting the first holes into the Horseshoe Block where some very interesting copper grades have been mined historically."

Two phases … to start with

Phoenix has a two-phase initial development focus at Empire, which produced nearly 700,000 tonnes of copper at an average recovered grade of about 3.6% from 1901 up to 1947. Part of the wider Alder Creek Mining District that local records show produced about two million ounces of silver, more than 40,000oz of gold and 60 million pounds of copper, 15Mlb of lead, and 5Mlb of zinc between 1879 and the 1980s, Empire was mined to depths of about 1,100ft via hillside adits on visible high-sulphide lodes, yielding grades considerably higher than the district average. Returns also included high-grade scheelite tungsten mined to support WWII military needs.

But it was leaching technology that rebooted some of the state's oxide gold deposits, and projects, in the 1980s and 90s, that also reignited interest in Empire's shallow oxide resources. Cambior Exploration came in and drilled a lot of holes into the oxides in the 1990s. Later, Cleveland Cliffs took an interest in the skarn magnetite.

"When we arrived on the scene there had been 285 holes put into the surface oxide," says Thomas, who previously worked in project generation for Cleveland Cliffs.

Cambior's earlier drilling (and excellent preservation of drill core, cuttings and records in Mackay) gave Phoenix a focus for its recent resource delineation drilling on Empire's oxides, to support a planned heap leach project, and limited deeper drilling aimed mainly at confirming the structure and position of sulphides. 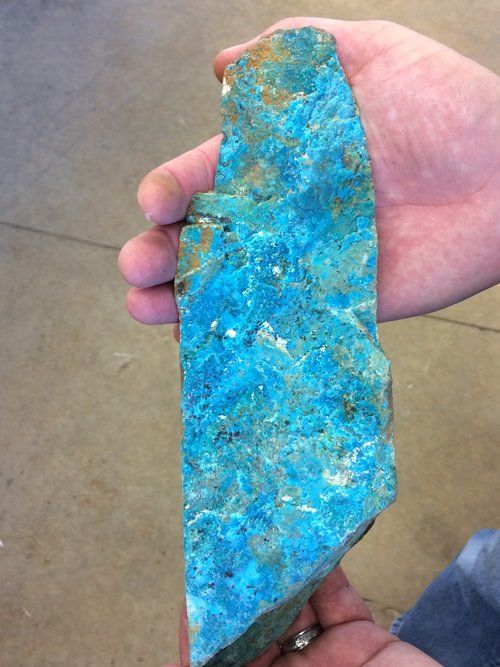 Phoenix's release in April this year of its preliminary economic assessment (PEA) of a circa US$50-60 million oxide copper project on 8-9 years of near-surface resource is a precursor to the more serious work now underway on mining and processing options, and demonstrating the potential for a bigger resource base.

Turner says Phoenix's two-phase development strategy aims to establish low-cost, openpit and SX-EW production of circa 8,000tpa of copper cathode from the current oxide resource, and then target mine-life extension via the deeper (below about 120m), higher-grade copper sulphides that have yielded historic drill intercepts of up to 11.4% copper.

He says it is likely only about 5% of the potential ore system has been explored to date and "so there is significant opportunity to increase the resource through phased exploration".

"We believe the current, aggressive drill programme will result in a project that does not look as it does at the moment," says Turner, whose 40-year career included stints at Granisle Copper in British Columbia, Hudson Bay Mining & Smelting in Manitoba, and with Falconbridge in Uganda and Rio Tinto Technical Services in London. He was also previously CEO of TSX-listed Nelson Gold and co-founder and CEO of AIM-listed Oxus Gold.

"We've got to upgrade the inferred resource, bring that into the measured and indicated category, and that will take about 15,000ft. We think that work will also give us a better handle on the [life-of-mine] head grade, and the stripping [ratio].

"We've already refurbished two of the adits - the 700 and the 1,100 [feet below the planned openpit top] - with a view to getting back underground and doing some channel sampling and mapping.

"At the moment that's taking a back seat to getting the heap leach/SXEW project up and running.

"And then we've got two very attractive looking ELs on the [Idaho] Cobalt Belt which we haven't done any work on beyond the original field work. So the intent is to spend this season understanding what we've got with a view to justifying a drilling programme for next season."

Phoenix's Idaho Cobalt Belt ground north of Empire is close to projects being advanced by Canadian junior miners such as eCobalt Solutions and US Cobalt, recently taken over by First Cobalt.

The company has also acquired an exclusive option to explore and develop the Gordon Lake project, in Canada's Northwest Territories, a high-grade shear hosted gold project where limited past drilling has literally scratched the surface of 17 known mineralised zones.

Phoenix is well funded after a recent GBP3 million (US$4 million) equity raising that drew a high level of oversubscriptions.

Thomas says competition for ground in Idaho is increasing as local and federal government support for mineral exploration and investment continues to improve.

"You could not find a more supportive regime anywhere in the world than what we have there locally, with the local people and council," he says.

"Idaho, and the Mackay area, is just a joy to work in.

"But we're also being assisted by, quite frankly, Donald Trump, who's lowered the [US corporate] tax rates and more importantly I think created a very, very encouraging climate for business. The whole, ‘let's get America back to work' ethos has become quite pervasive.

"And that combined with the Idaho governor's [Butch Otter] promotion of the state as a place to invest, and changes that have streamlined permitting and made things more predictable, including time-scales, has just made for an environment that is very supportive of projects like ours.

"Idaho has tended to be left behind in the past. The state has a rich mining heritage, but generally very little modern exploration.

"No-one has really taken any notice of Idaho, other than maybe Coeur d'Alene, and yet there were a number of operations that ran at the turn of the [last] century.

"It shows you that it's a metallogenic belt which justifies the kind of investigation that I think is about to take place in Idaho." 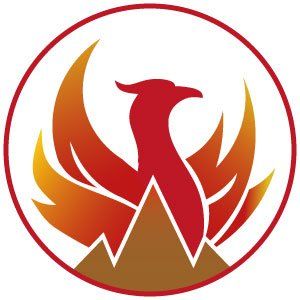 Phoenix to use LME copper price on bonds