Kasbah on cusp of tin riches at world-class Achmmach

Better known, perhaps, as head of Wolf Minerals, where he spearheaded the development of Britain’s first major tungsten and tin mine, bringing it into commercial production in 2015, Russell Clark is today CEO of another ASX-listed company, Kasbah Resources, which owns the world class Achmmach tin project in Morocco. 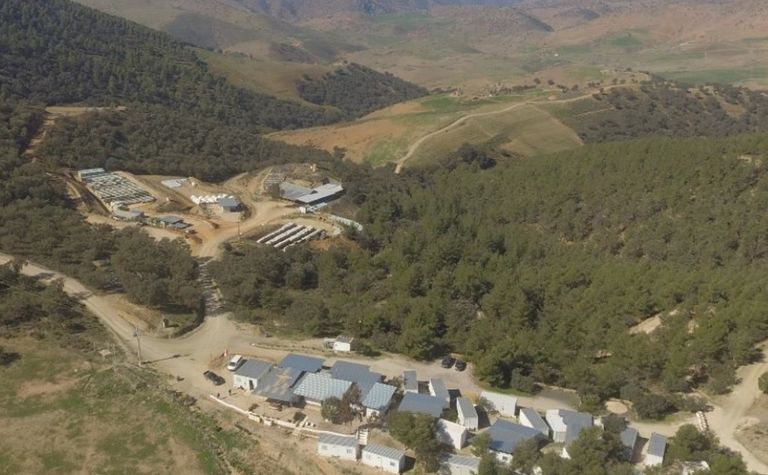 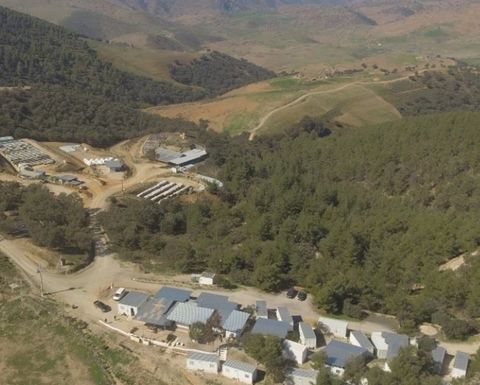 Kasbah published a compelling DFS on Achmmach in July this year

With characteristic determination, he is working to advance the Achmmach project into a major underground tin mining operation, near Meknes in the north of the country. The mine could eventually export about 1.5% of global tin production, said Clark. By any measure, this is an important project, and one he is eager to sink his teeth into.

He was appointed in 2017 as part of a management reboot. The firm had been through a sticky period, with previous management thwarted by a weak tin price, and losing market confidence after failing to deliver on a number of fronts. Clark was attracted by the challenge of a turnaround story. Besides, after Wolf, he had no desire to end up managing a small show in Western Australia.

"Frankly, Morocco is so much more interesting. It's safe, has great infrastructure and the people are fabulous." said Clark.

The state of play is this: the mine is fully-permitted, a compelling definitive feasibility study (DFS) was published in July and now Clark is onto the next stage - getting funding to bankroll a project estimated to cost just shy of US$100 million.

He reckons the funding package will be wrapped up by the end of the year, with backers providing around 60% to 70% of the cost via debt finance and the rest coming via an equity raise, probably in early 2019.

There is a big Japanese angle to the Kasbah story - providing a sort of X factor that doesn't seem to have been factored in by the market - at least, not yet.

Kasbah owns 75% of the Achmmach project, but the remainder is spoken for by two Japanese joint venture partners, Toyota Tsusho (20%) and Nittetsu Mining (5%). When project equity is required in 2019, the Japanese will have to provide 25% of it, relieving the burden on other shareholders. And critically, because Japan has hardly any mineral endowment, Japanese government agencies are working with the Joint Venture to provide attractive debt financing to help underwrite the project.

That could make all the difference to the returns on offer at Achmmach. July's DFS cited an ungeared post-tax internal rate of return (IRR) of 23% (assuming the tin price is at around $21,000 per tonne) and using an 8% real discount rate.

But with an attractive Japanese ECA backed debt package there is scope for significant gearing leverage which could result in the IRR being in excess 35%. At that point, said Clark, "things become very interesting and positive for the project indeed".

He is targeting two other possible sources of finance. The first is an offtake agreement and Clark is talking to a number of parties about that and secondly, he hasn't ruled out the possibility of bringing in another strategic partner and is discussing options with a number of interested groups.

The upshot is that while not concluded yet, there are multiple viable project funding options for Kasbah to consider, and the company is confident of finalising arrangements and then breaking ground on project construction.

Clark is bullish about tin, which has traded at $22,000/t during 2018, but has fallen back to just under $19,000 as trade wars have hit base metal prices around the world. But the omens look good. Myanmar, which seemingly came from nowhere five years ago to become a significant tin producer, is slowly fading "as much of the easy alluvial material has been mined". Chinese production is falling as environmental controls continue to be enforced and Peruvian production is reducing as tin grades fall at operations there.

The International Tin Association (ITA) is forecasting a tin deficit for the next few years as demand exceeds supply, and it could continue without meaningful new supply. According to Clark, there is little visibility on new production, with current tin project development occurring in risky jurisdictions such as the Democratic Republic of the Congo.

The biggest use of tin is in lead-free solder (50%). The regulatory requirement to reduce lead and increase the tin content in solder (from 60% up to 96%) has increased demand for tin in recent years. China is the largest consumer with a 45% market share.

Additionally, there is growing demand for tin in electric vehicles, computers, advanced robotics and renewable energy. ITA has suggested that EVs will require 5 times more tin than in traditional vehicles. With the EV market expected to grow exponentially, so will the demand for tin. Massachusetts Institute of Technology has identified tin as one of the key metals of the future, required to interconnect the various electric and electronic aspects of the future, digital world.

With demand expected to move up by 1%-2% per annum, the World Bank estimates tin prices to average $20,356/t over the next 10 years in real terms. Clark said: "Toyota uses about 5,000t of tin a year in its car manufacturing with the mineral found in conventional lead-acid batteries, but also in semiconductors, and chemicals used for glass." 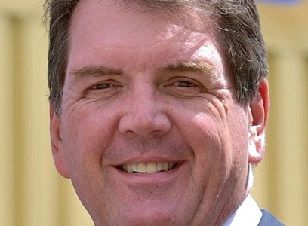 Is Clark worried about the recent tin sell-off? In other words, could Achmmach become uneconomic to develop?

He said: "The price of tin has fallen less than many of the other base metals in percentage terms. If you're asking me could the price go down further, yes it could. Is it likely to do that? I don't think so. Macquarie is looking at a price of $23,000 in 2022, which tends to support the ITA forecasts. The ITA says production is going down, stockpiles are going down, demand is going up, and there is a tin deficit."

"If the price falls further in the near term, it could affect the funding options - of course! However, it is important to note that we are not looking to produce today, in today's tin price environment, and all of the forecasts suggest the price will go up. When I look at extra production coming on, I can see maybe 35,000t by 2022, but the world needs 60,000t or 65,000t by then. I can see the deficit carrying on for longer than the ITA thinks."

The project is located within the rolling hills of the north-eastern part of the central plateau of the Atlas Mountains. The altitude is 1,085m above sea level. Clark likes Morocco: "Power and water are plentiful, the country has well-developed national infrastructure, including rail, road, sea ports and airports. Access from the capital Rabat to the project is just150 km east along the A2 expressway to Meknès."

The DFS heralded the use of improved new technologies that would cut operating and capital costs. For instance, high-pressure grinding rolls (HPGR) negate the need for a third crusher, and also the need for a large rod mill - a huge draw for power. "Secondly, we are making use of a high-performance ore-sorting machine which means you end up with 30% less tailings and the back end of the plant is smaller by the same percentage; that also has a positive impact on water and power costs."

About A$95 million has been spent on the project to date and 120km of drilling undertaken. "Achmmach is one of the most advanced tin projects with global significance," said Clark. 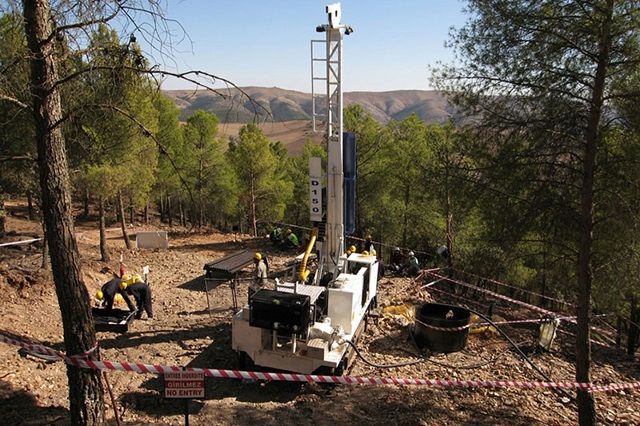 Extensive drilling has been completed by Kasbah at Achmmach

"Current reserves will last 10 years, mining at a rate of 750,000 tonnes of ore per annum. However, the resource is open at depth and along strike, and additional drilling has the potential to extend the mine life significantly," he said.

Every additional US$1,000 in the tin price increases the project's NPV and ungeared returns by about US$20 million and 3% respectively, according to the DFS- highlighting the shareholder upside the anticipated increase in tin price over the next few years would deliver for the project and Kasbah. The capital cost was put at US$96.4m with payback in four years.

"We've de-risked this project an awful lot. At the end of the day, though, the tin price is critical. Ultimately, it's metal prices that make projects work. But if you are asking whether I am confident that prices are on the up, the answer is a resounding yes. This mine is ready to go and our expectation is for first production in the second six months of 2020" said Clark. 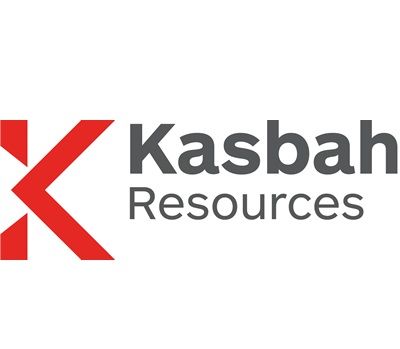