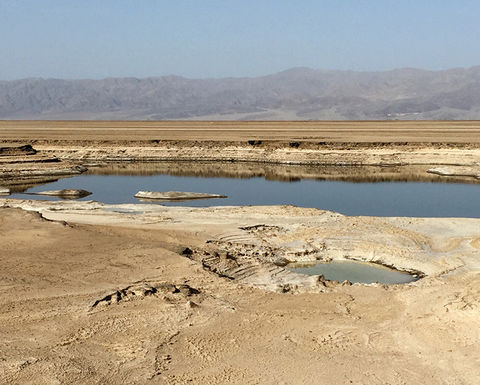 Australia- and London LSE-listed Danakali is preparing to enrich the world's sustainable farming, crop yields, and food/nutrition security efforts with a pioneering push to develop the soon-to-be sole Sulphate of Potash (SOP) mine in the whole of the crucial supply areas of the European, Middle Eastern, and African timezones.

The development - known as Colluli in East Africa's Eritrea - doesn't just boast a geographical uniqueness, it also brings to the table staggering metrics and green capabilities.

The fully-permitted high grade SOP project, which development started on early last year, has a massive, estimated ore reserve of 1.1 billion tonnes at 10.5% K20 for 203 million tonnes of contained SOP equivalent - providing an enormous mine life of about 200 years.

And first production is targeted for as soon as next year.

"We can produce more SOP - cheaper, easier, and greener - than anyone else can possibly hope to," Danakali executive chairman Seamus Cornelius said.

The "cheaper" and "easier" aspects come in part by Colluli being the shallowest known evaporite deposit with a mineralisation starting at just 16 metres of depth. And it claims the title of world's closest SOP deposit to a coastline, with the Port of Massawa just 230 km away - giving the project access to one of the busiest trade routes on earth.

"This will be the only deposit in the world where we can make SOP from an opencut mine because the deposit is so shallow. We can expand it very easily, because unlike the much deeper potash deposits or brine sources in the rest of the world - we don't have to put capital into sinking a shaft down into the ground or into pumping and evaporating massive volumes of water," he said.

"And longer term, what that means for us is we are in a very advantageous position to dominate the market and to supply SOP not only into the existing market, but also into future market," he said.

A league of its own

When pushed to draw a comparison to how Colluli shapes up next to existing potash operations, Cornelius is at a loss.

‘We can produce more SOP - cheaper, easier, and greener - than anyone else can possibly hope to'

"Well … it's kind of incomparable, really," he says. "It's in a different league to most mines."

He says the size and scale of it is more akin to gigantic regional commodity hubs like his home state's - Western Australia's - Pilbara iron ore region or the oil producing sector in Saudi Arabia, rather than any one mine.

"That's kind of what it is - especially if you look at the whole of the Danakil area," the chairman said.

"We're talking about Colluli having 200 years of mine life and that's because it's in the best part of the Danakil basin. But as you go down to the south and to the west, the deposit continues - it just gets deeper," he said, noting that there's the potential to keep mining for even longer than that.

Another linking aspect that offers Cornelius a special familiarity even as far from his upbringing in Western Australia as the Horn of Africa is Eritrea's mining code.

"We've found Eritrea to be very transparent and consistent across the board. There's a supportive business environment because mining there is a very strategic industry. So, as a mining jurisdiction - it's got nothing but ticks in all the right boxes," he said.

Eritrea's positioning in Africa also offers the dual benefits of being well placed to help some of the regions most in need of improved food nutrition security as well as good market demand.

"When you come from Australia, or Canada, or the USA, or London - for most people, most of the time, food security is not even a topic," he said.

"But for near where the project is - across Africa, across the Middle East, over to India - for most of the world's population food security is a topic," he said.

"And something like Colluli - because of what Colluli is, because of the fertiliser we will produce, because of the location where we produce it, it's going to have a really direct impact of the lives of billions of people and give them nutritious food security," he said.

Danakali has 100% of its sales locked in for the first 10 years - and with the option to extend for a further three - with a take-or-pay offtake agreement with EuroChem. As part of the deal, the miner can take advantage of strong market conditions and sell up to 13% of the total through alternative channels where it sees fit - and there are plenty of options.

"One of the main crops that uses SOP is coffee. And if you look at the neighbouring countries to Eritrea - they're big coffee producers: Ethiopia, Tanzania, Kenya, and so on. They're right next door to us. We can supply directly to those markets - and we'll be able to do it much more cheaply and with a better profit margin than anyone else can," he said.

Along with food security, Danakali is focused on one of the world's other great problems: carbon emissions. And this is where Cornelius' and Danakali's green ambitions come in and Colluli offers them up on a plate.

"We've been collecting the data for wind and for solar for a long time. We know we're also in a very active geothermal area. So, we have clearly the best three sources of clean energy right there ready for us.

"We think as we go forward, a lot of people are going to pay a lot more attention to the carbon inputs of the food and drink they consume - and fertilizer is all about food," he said.

"So, someone who's sitting there drinking their coffee in the morning is going to feel happy about the idea that this coffee is clean, green, zero carbon coffee all the way along the food supply chain, starting with the fertilizer, the same goes for tea, nuts, berries, potatoes and a lot more ."