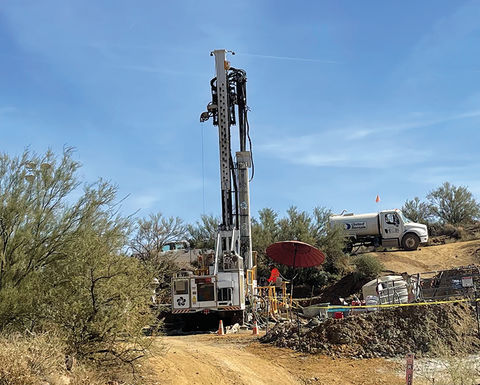 Toronto-headquartered exploration company, Arizona Metals Corp (TSX.V:AMC, OTCQX:AZMCF), has received permit approval from the US Bureau of Land Management (BLM) for a seventh drill pad, located west of its promising precious and base metals Kay deposit, located in Yavapai, about a one hour drive from Phoenix, Arizona.

This new pad, situated approximately 200m west of the Kay deposit, will allow for testing of the Central target "which was previously defined based on coincident structural, geochemical, and geophysical anomalies".

The company has planned an initial programme at the Central target of up to 20 holes totalling 11,000m. Drilling on the first hole started on April 23.

Arizona Metals focuses on extending Kay's mineralisation through further drilling on strike by 500m north and 300m south, as well as 16 untested targets to the west. Pads have already been permitted and built to test the strike extensions, and the company has submitted applications to the BLM for additional drill pads (C1 and C2) located west of the Central target, "which will allow for drill testing of the Central target from the west side, while also allowing for drilling of additional coincident anomalies located between the Central and Western targets".

"Our goal now is to see if we can find another deposit outside of Kay but also to define the Kay deposit an NI 43-101-compliant resource, so we can show the potential for an economic deposit," explained Marc Pais, Arizona Metals' president and CEO. "We now have two rigs at the Kay deposit to extend mineralisation and work on resource definition. The third rig is now purely focused on exploration drilling to find new deposits. We have ordered a fourth rig for the same reason. The bulk of our spending going forward will be to test the 16 western anomalies, aiming for new discoveries," he added.

Meanwhile, Arizona Metals has significantly increased its working capital position to C$65m that will be used to finance its drilling programmes. Prior to its May 22, 2022, expiry, the company exercised 4,909,999 common share purchase warrants, initially issued a year ago, generating gross proceeds of almost C$15m.

On April 11, the company reported promising results from two recently completed drill holes at its Kay mine. Both holes were reported after including estimated metallurgical recoveries based on historical data and preliminary studies by Arizona Metals. 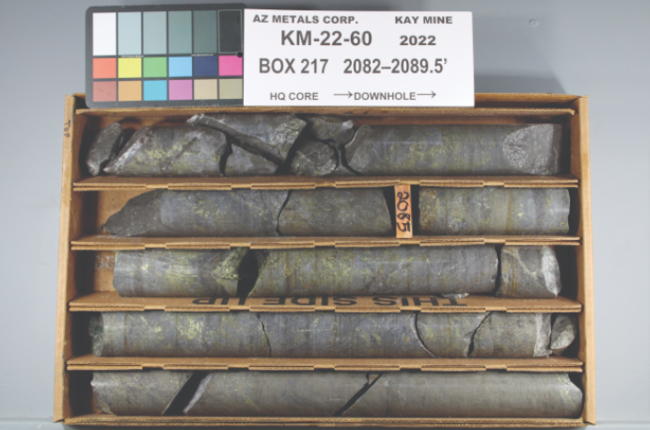 "An additional 20 holes are pending, with three drill rigs turning 24 hours per day," the company indicated.

Located in the central portion of the deposit, both holes "demonstrate excellent continuity of mineralisation between holes 26, 28, 25A, 57A and 40" in addition to 58B for Hole 57B, said the company. Drilling is underway to test for depth extensions to at least 1,200m, while also testing for lateral extensions of the thick hinge zone. The 20 holes pending all encountered semi-massive or massive sulphide mineralisation, and those intersections are guiding the drilling currently underway.

The Kay mine property, acquired in January 2019 and 100%-owned by Arizona Metals, is located on a combination of patented and BLM claims totalling 526ha.

The area in Arizona is well-known for its rich Volcanogenic Massive Sulphide (VMS) deposit belt with copper-mining history back to the 1880s. The Kay mine is a steeply dipping VMS deposit that has been defined from a depth of 100m to at least 900m. It is open for expansion on strike and at depth. 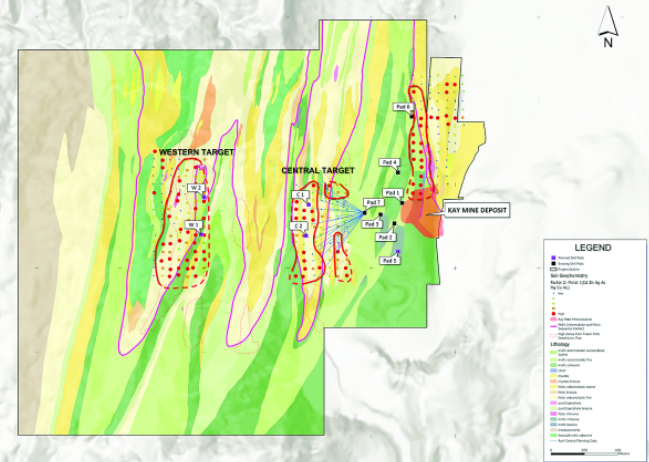 Arizona Metals is looking at developing a high-grade underground mine similar to the 60 VMS past-producing ones around Kay, most of which shut down in the late 1970s due to a combination of low metals prices and increasing mining depths.

It is anticipated that the Kay mine would need to have a concentrator/floatation plant at site. According to initial metallurgy studies, the company could look at producing both copper and zinc concentrates, with gold and silver reporting to each, which could be sent to smelters and refiners worldwide.

With the assayed holes reported in April, Arizona Metals has completed a total of 55,000m in the phase-two programme at the Kay mine, and 65,000m since inception of drilling.

With its working capital increased to C$65 million, the company is fully-funded to complete the remaining 20,000m planned for the phase-two programme budgeted at 75,000m, as well an additional 76,000m in the phase-three programme.

Phase three is now underway, with an initial programme of 11,000m announced to test the Central target. With three rigs turning, Arizona Metals is fully-funded for 18 to 24 months of drilling, but could "likely accelerate based on success", said Pais, underlining that "it is just a question of adding more drill rigs".

Pais believes that "the big opportunity is that none of the 16 targets west of Kay have been drill tested. This is extremely rare to find next to a known deposit in a prolific historic mining district."

There are currently 21 holes pending results from drilling at the Kay deposit.

The company also owns 100% of the Sugarloaf Peak property, in La Paz County, which is located on 1,781ha of BLM claims.

Sugarloaf, acquired in 2016, is a heap-leach, open-pit target and has a historical estimate of "100 million tonnes containing 1.5 million ounces of gold" at a grade of 0.5g/t, according to testing done in 1983.

As the deposit is open at depth, Arizona Metals drilled four holes below the historical resources to test for depth potential and provide material for metallurgical testing.

"Right now, we are focusing on doing the metallurgical work at Sugarloaf as we want to make sure the deposit is leachable and that gold can be recovered before spending a lot of money drilling it," explained Pais.

The company is currently undertaking detailed column testing in order to confirm preliminary "promising numbers from bottle roll tests" and hopes to get those results by the end of 2022.

"Following the column test results, we will make a plan to do some drilling at Sugarloaf. Then we have to decide if we are drilling inside Arizona Metals or if the market is right for a possibility of spinning Sugarloaf out for our shareholders, to be advanced in a separate company. We have not made this decision yet but we are looking at possibilities," revealed Pais.

Arizona Metals Corp. owns 100% of both the Kay Mine Project (Yavapai County) and the Sugarloaf Peak Gold Project (La Paz County) in Arizona.

Arizona Metals Corp. owns 100% of both the Kay Mine Project (Yavapai County) and the Sugarloaf Peak Gold Project (La Paz County) in Arizona.