AS READERS view this report, the drill rigs will have begun hammering away at Aurora Energy Metals uranium and lithium advanced exploration project in south-east Oregon in the United States. 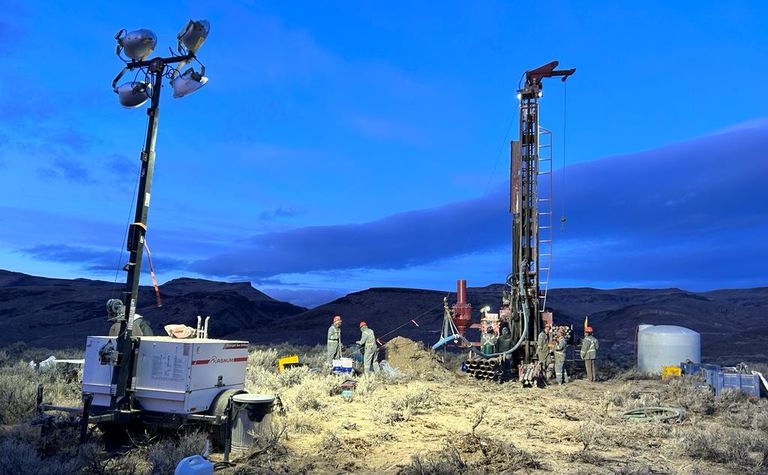 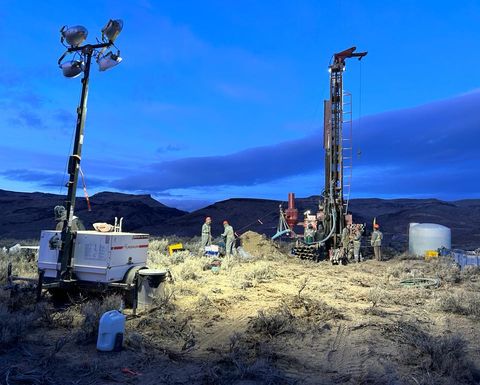 While the company is firmly focused on the uranium component of the AEMP (Aurora Energy Metals Project) in the short term, the current drill program will also test the potential extent of the lithium-bearing sediments which overlay the uranium mineralisation. 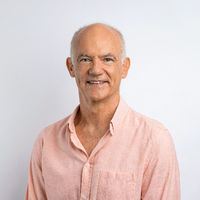 The latest drill campaign, announced on October 19, is a follow up to extensive exploration at the project since its discovery in the late 1970s. The uranium mineralisation, which lies within a volcanic-hosted deposit, is very well-defined with more than 600 drillholes completed, the most recent in 2011.

The campaign involves 17 reverse circulation holes for about 3400m, targeting both lithium and uranium, initially in the north-western part of the project area where the company believes there may be an extension to proven mineralisation.

Aurora already has well-defined uranium mineral resource of 69.3 million tonnes at 248 parts per million uranium oxide equivalent for 37.9 million pounds of U3O8, along with confirmed lithium hosted in shallow lakebed sediments above and surrounding the uranium deposit.

The company's vision is to supply minerals that are critical to the energy transition, an aspect about which managing director Greg Cochran is extremely upbeat.

Aurora has only been listed on the Australian Securities Exchange since May this year and Cochran sincerely believes the plans his company has for the US project could make it a "mine of the future".

The deposit is near surface with a flat-lying geometry amenable to very low strip ratio open-pit mining. Low-cost mining is possible due to the free-dig nature of the lake sediment overburden. Most of the uranium mineralisation is contained within a fine fraction, amenable to low-cost scrubbing and screening upgrades.

The project is served by excellent infrastructure with the town of McDermitt, sealed roads and hydro generated power nearby.

Mining engineer Cochran, who had his first association with uranium in his uni days in the 1980s, makes four points about Aurora and the AEMP, which he is keen to see the market recognising when comparing it to other uranium projects elsewhere in the world.

The first point Cochran makes is that the AEMP, with nearly 40 million pounds of U308, has the scale to become a credible uranium mine, with the potential to produce at least 1.5 million pounds per annum.

He points out that scale is important because in the past, upwards of 350 uranium mines in the US were producing between 40 and 45 million pounds, leading to huge environmental legacies.

"At around 1.5 million pounds per annum, you're at a level where you can develop a fully integrated, standalone operation.

"In the old days,  ore was trucked from mines to selected regional plants over great distances. Those mines were often left abandoned. At the scale we're talking about, you can afford to build a plant to take the uranium through to at least the point of loaded resin. That is a product that you can afford to safely truck great distances." (Loaded resin is the penultimate step in the process which precedes stripping and finally precipitation of uranium).

"That is a proven model in the US and probably what we will consider doing. Scale and quality of the deposit in one single location is what works today, not producing ore from a multitude of smaller deposits that are miles apart."

Cochran's second point is about the level of resource definition. "We are not at an early stage of exploration, touting our first intercepts or surface samples which are telling us this or that.

"The deposit is over 95% in the indicated category, and we are in the process of converting part of that resource to measured, which is a very high standard of definition. This gives people confidence in our understanding of the geology and our ability to mine the resource. There are more than 600 holes drilled, most of them into the deposit and we are about to put some more into it to generate material for further metallurgical testwork. 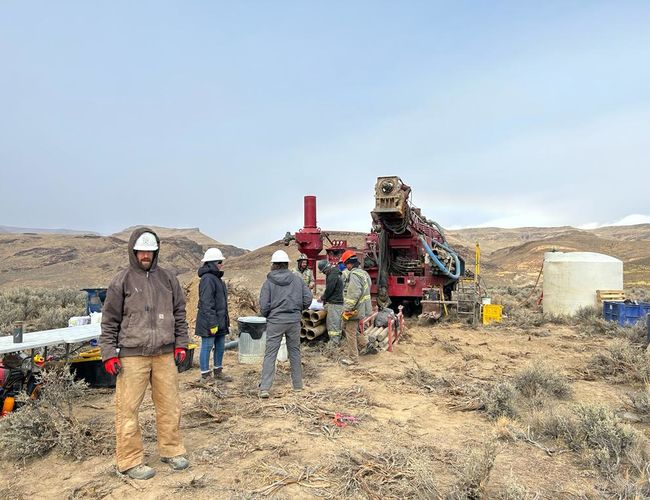 A drill team on site at the AEMP in October 2022

"The drill campaign currently taking place will start by testing the north-west corner for a potential extension, which we think there is. And when you look at the intersections we have from the last campaign 10 years ago, any uranium exploration company would love results like that. In that area they are generally thick, high grade and shallow in what is already a close to 40-million-pound well-defined deposit. It is all real upside, those intersections were not 150 or 200ppm from 100 to 200m deep, they were all generally close to surface, and frequently well north of 500ppm," Cochran said.

Anecdotally, Cochran says that each time he and the team visit site, arriving in Reno, Nevada, they pass Elon Musk's Tesla Gigafactory in the Storey County of that state.

"Given the high-value nature of lithium, it is a product which can be transported right across the country, to the east coast where many gigafactories are being developed. Transport is not an issue, but US domestic supply is. And that is why it is great to be where we are."

Still on the theme of location, Cochran says that Aurora's recent acquisition of private land in Nevada on the Oregon border is a game-changer. He explains that while Oregon is a good jurisdiction in which to work, it does not have the robust mining history of Nevada to the south-east.

That means that while the mining operation will be permitted in Oregon, plant and tailings could be established in Nevada, a state which has well-proven permitting processes for what you do after digging of the dirt.

"It is a lot simpler to permit a mine without a process plant in Oregon and that is a major benefit as when it comes to the plant, we will be dealing with regulators in Nevada who have extensive industry experience and who understand mining. In addition, private land is easier to work on, provided of course your approach is environmentally sound and you put a lot of effort into consultation with local communities. This strategy just ticks so many boxes."

Also linked to the subject of location, Cochran points out the favourable price of power in Oregon.

"We have hydropower which costs 6½c per kilowatt hour, which is the average price of power in Oregon this year to date. There are not many places in the world which has that kind of pricing. And because it is hydropower, you can immediately begin to envisage a ‘mine of the future' there.

"This enables you to have a low-impact, low-carbon footprint mining operation. After mining, the ore can be part-processed in an in-pit crusher, then put on a conveyor belt which takes it to your plant which is about 10km away in Nevada, all done with cheap, reliable, clean power. A pipeline to transport the ore as a slurry is also an option that could be considered.

"Trucks would be used to move waste rock, but ore would be taken out of the pit on a conveyor or in a pipeline. We are already talking to companies which can do amazing things with belts, and I am so excited about that aspect of the project. A ‘mine of the future' is the way in which we characterise the plans we already have, despite the fact we have only been listed for six months now (May 2022)." 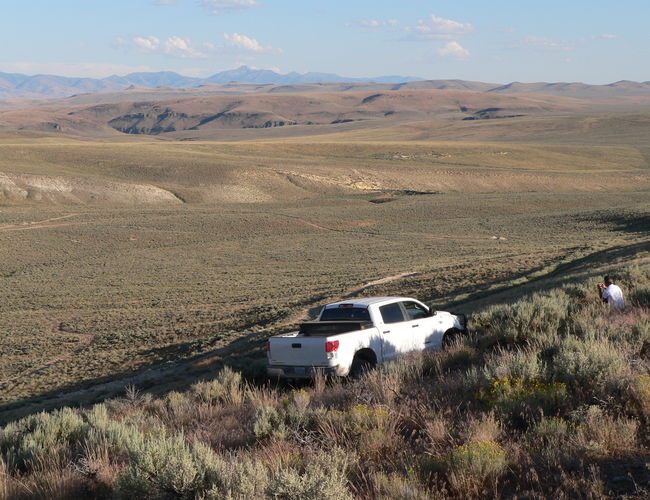 Looking down on the AEMP lease area

Cochran, a seasoned operator who loved his time with uranium company Deep Yellow and before that with Uranium One, points to the depth of skills and experience within the board and management team, all of whom have experience in geology, processing, finance - and, most importantly - they all know what it takes to develop and deliver a successful operation. "We have all the skills in the right places."

The fourth point Cochran makes is all about the current environment in the US and globally on the subject of nuclear power and battery minerals.

"The tailwinds in the US supporting production of these commodities are as they have never been seen before. The need, especially in the wake of Russia's invasion of Ukraine, for significant domestic supply uranium, is strongly recognised.

"There is a growing groundswell of support for nuclear power and now, within the context of climate change, it has political bipartisan support. The building blocks are already in place and support battery minerals and nuclear power is increasing. And now there is price protection for nuclear power, although it's not a blunt subsidy, like those that have been handed out to solar and other renewables with questionable success.

"Historically, renewables were given priority access to the grid over nuclear. So effectively the largest, most reliable source of emissions-free electricity was blocked at times from selling into the grid, which rendered them uneconomic. But now, at least, that has changed and there is legitimate price support, though I stress, it is not a giveaway subsidy. There is no doubt that that in the US the political tailwinds are behind uranium and lithium mining and Aurora stands to benefit from that," Cochran said.

In a philosophical sense, Cochran concludes: "There are so many things in our favour, we really are exceptionally well positioned to advance the project. .

"And when it comes to the uranium right now, it is about focusing on project development. However, on the lithium side we recognise there is a longer way to go because as it's still somewhat early-stage exploration and it's something we must prove up over time. But if you look at the size of the two lithium deposits on our doorstep, the lithium has the potential to outshine uranium as the AEMP has the potential to also be a very large deposit." 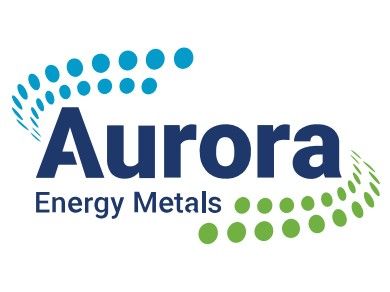 Uranium One to invest up to US$215M