Mining companies often feel undervalued. Sometimes CEOs are grasping for a few more cents on the share price with an eye on bonus season but other times they actually have a story the market does not understand. 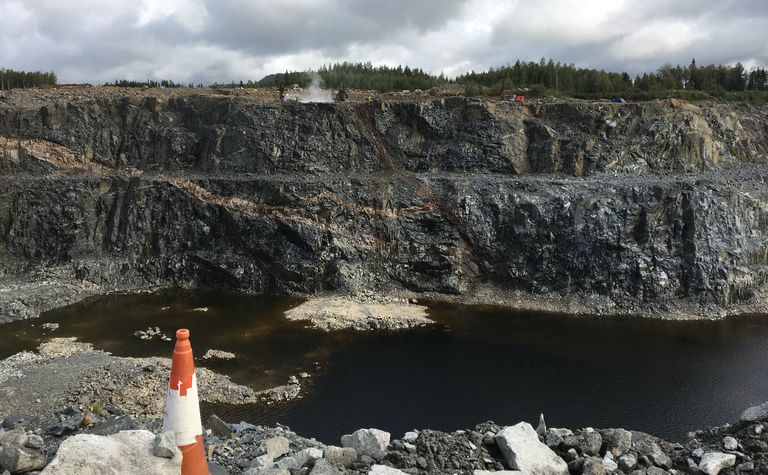 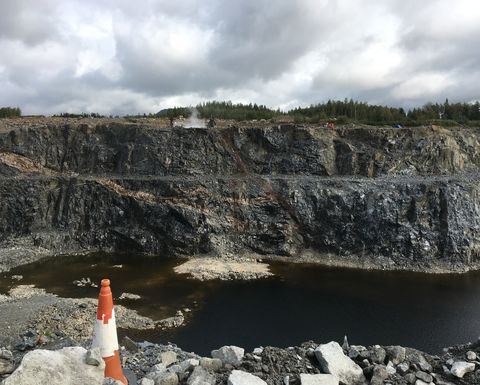 The red shear is visible in Laiva's deeper north pit

TSXV-listed Nordic Gold (Firesteel Resources until earlier this month) has a story that looks to have passed over Toronto investors' heads: at first glance, the owner of a soon-to-be-producing gold mine with a new 2 million-tonne-per-day plant and a competent operations team should be worth more than C16c (US12c) per share.

But it's not that simple once you have a look at the backstory.

Last year, CEO Michael Hepworth saw an opportunity in the struggling Nordic Mines operation south of Oulu on Finland's coast, and handed it US$1 million in early 2017 in exchange for an exclusivity agreement.

He said during a mine visit this month his company taking the project had caused some consternation in Finland.

"It's kind of like a dog that chases a car, when you catch it, you've got to be careful," he said.

"There are some people who are very angry we got this for nothing.

"This company had a market cap of €500 million (US$590 million) at one stage, I don't believe that [this is worth that] but there are some people who do."

The low-grade openpit project was put into care and maintenance in 2013 (with stockpiled ore processed for another few months) after less than two years of production, and by last year its owner was running out of upkeep money.

Nordic Gold plans to be producing again by the end of the year, with 69,000 ounces to come in the first year and reaching 85,000oz in the fifth year, in a six-year mine life, with an LOM average AISC of $951/oz.

The Metso-designed plant is in good running order, and all permitting is in place.

The two pits needed dewatering (largely complete in the shallower north pit) but were generally in a good state.

Nordic Gold liked what it saw and took 60% of the asset by promising a $20 million spend on restarting it.

Since then, it has moved 100% ownership, with Nordic Mines shareholders to be handed 58 million shares in Nordic Gold, now worth around $7 million.

Laiva's 2Mpta plant and PEA mill grade of 1.45g/t (with 90% recovery) point to a tidy gold producer, and the Finnish tax department has allowed the new owner to carry forward $155 million in losses to shrink the tax bill.

But some key investor metrics are missing.

The project does not have a reserve despite having been in operation, and Nordic has only just published a preliminary economic study.

Nordic Gold got the cash from Pandion Mine Finance in exchange for 67,000oz of gold at a discounted spot price, spread over three and a half years from May 2019, peaking at 1,950oz per month at the midpoint. The company has the option of buying out the forward sale deal for about $30 million, according to Hepworth.

The dollar value of 67,000oz is currently $80 million, so it's unclear why Pandion would take the $30 million.

If all goes well at Laiva, this arrangement will not be an issue, but Pandion has put in a rule that blocks Nordic Gold from borrowing while the deal is on, and it will soon need to raise cash.

Hepworth told the group this would be raised through equity finance, which is not ideal when you're chasing a higher valuation.

The John T Boyd Company PEA offers a frank view of the project.

It said the previous operators could not get the hard/soft rock ratio right and failed to budget for processing refinement once production had started, resulting in an average head grade in that time of only 0.9g/t.

"The project as originally configured by the previous operator proved to be sub-economic owing in part to the financial issues incurred by the prior operator, but perhaps more significantly as the result of inaccurate previous resource modelling and attendant mining practices which results therefrom," said Boyd senior geologist Chris Wilson.

The mineralisation is "discrete [and] relatively narrow" and dispersed through the area, which coupled with the low grade means knowing exactly where to mine is critical. 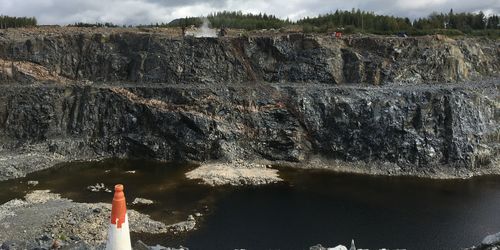 The red shear is visible in Laiva's deeper north pit

The Boyd team said Laiva needed a reserve and PFS in the works before or at the same time as going into production.

COO and Laiva general manager Joe Ranford said the geology was front of mind, and has brought in two geologists who worked on the mine last time to try and avoid the same mistakes.

"We see there was a fair-sized disconnect between the geology and mining process and the mill focus [under Nordic Mines]," he said.

"They seemed to think most of the problems with the whole system [came from] the mill not performing the right way."

Ranford said recent drilling showed there were options below the pits, with 20m at 1.5g/t being achieved 300m down, and was confident that mineralisation was consistent despite lacking "a host of holes on a 25m pattern" through those areas.

With a switched-on mining team Nordic Gold has put itself in a better position to make Laiva a success, but if it's sprinting to production just to start paying back the $20 million, that share price boost could be further away than ever.

Market focus on the US Fed

Heads at SolGold continue to roll