"Where does social licence sit in terms of being integral and core to business success in the mining sector?" 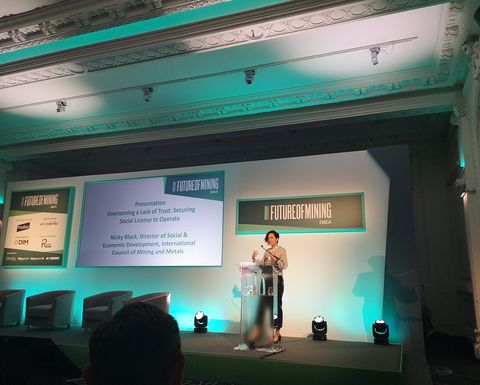 “I’d say the mining sector has come a very long way in a relatively short space of time both in understanding our social impacts …, but the bar is getting higher,” Nicky Black says

International Council on Mining and Metals' social and economic development director Nicky Black's question to delegates at the Future of Mining EMEA in London was met with a quick response from an audience member - in the former of another question.

"Is your question where does it sit or where should it sit?" Because, as she pointed out, those are two very different things.

Most of the audience agreed that it ‘should' sit at the core, but quite a few hands went down when asked if it actually sits there in terms of how business decisions are made today.

Just like the conference attendees, the industry is well aware social licence forms both a key consideration and challenge for miners today and certainly in future.

"Reporting on the top 10 business risks facing mining and metals in the last two years, just as one example, Ernst & Young identified social licence to operate as the highest priority from its interviews with CEOs and other industry leaders," Black said.

Mining can be a powerful economic driver. Black pointed out ICMM members alone (comprising 26 mining houses) paid more than US$100 billion dollars in taxes and royalties over the past five years. They also directly employed more than 1 million people, while procuring locally to the tune of $17 billion in 2016. According to Black, they also spend more than 1 billion dollars on social projects annually.

"And just to reflect on that, in fact in the last year, ICMM published a piece of research that found that the lives of people in countries where economies are dependent on mining have on average improved faster than those of people in other countries over the last 20 years," she said.

The report countered the narrative of the ‘resource curse' in mining-dependent countries by showing that, over a 20-year period, in the 25 countries studied people had generally been healthier, better educated and enjoyed improved access to affordable and clean energy, water and sanitation, as well as telecoms and financial services.

"When I speak with stakeholders around the world, whether they're NGOs advocating for greater community benefit or changes in government practices, whether it's mining executives, investors [or] governments … it can feel like engaging in parallel universes," Black said.

The frustrations she often hears about from mining companies, ranging from site to corporate leadership, is that benefits being generated aren't recognised or appreciated, and that the ask from countries and communities, as well as from investors, just keeps growing.

On the other side, frustrations among communities include a lack of engagement from the miners.

"What we're beginning to hear are warnings that our stated ambition as an industry around the importance of securing social licence and benefitting communities is not being matched by investment, executive attention, the integration of business or integration of management processes into broader business practice."

While global leaders have identified social licence as a top risk, there are other global trends that highlight the need for more trust-building. These include growing community opposition to mining; Black mentioned Lock the Gate in Australia, a rise in community protest incidents, and new regulations and bans restricting mining in certain jurisdictions.

"And these challenges are being compounded by the new technologies … whether it's automated trucks or digitisation. The social contract with communities has always been based on you'll get the environmental impacts and there are negative social impacts, but you're the first in line for jobs," she said.

"And a world where there are perhaps 30-70% less jobs in certain brackets at site, what does that mean for the social contract?

"So, we need to get better at this fast, in order to be able to adopt technology to deliver the efficiency gains, and in many ways meet the sustainable development objectives of low-carbon emissions and to have access to the minerals and metals that we need for the new economy."

The call for more transparency and accountability along the mining value chain is another trend, which started with consumer-facing brands.

"When ICMM was founded in 2001, it would have been hard to imagine that Apple would one day be a bigger driver for ESG improvement than Greenpeace, or that investors would demand more accurate data on social impact than Oxfam. But that's what we've seen in the last couple of years," Black said.

Moreover, miners are facing scrutiny over their tailings storage facilities following the deadly failure of another dam at a Vale mine in Brazil earlier this year.

"Stakeholders tell us that this is an existential moment for the industry; coming just three years after Samarco, there's a sense that we haven't put our house in order, and that we need to act and act fast.

"ICMM is pleased to be co-convening with the UN Environment programme and Principles for Responsible Investment on an independent review to establish an international standard on tailings storage facilities."

Black believes the industry needs to deliver step change in its social management approach to show it has identified and taken the right steps to counteract negative social impacts and to deliver socio-economic benefit.