The fear of a global recession is now the top concern for the mining and metals sector, according to a survey by an international law firm of 67 senior decision makers in the industry. 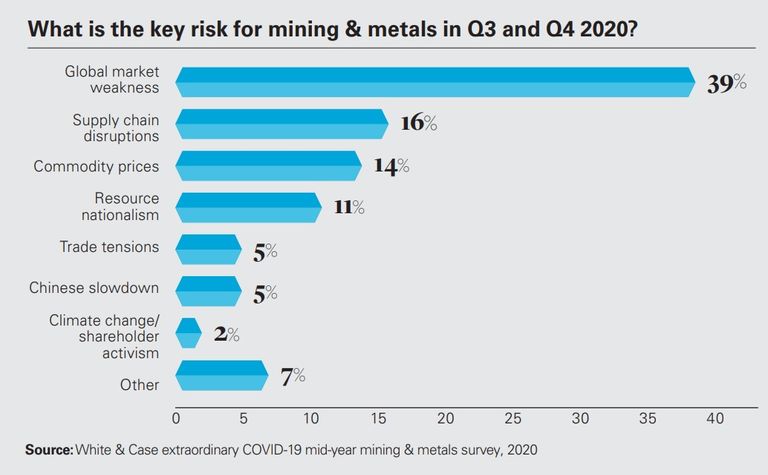 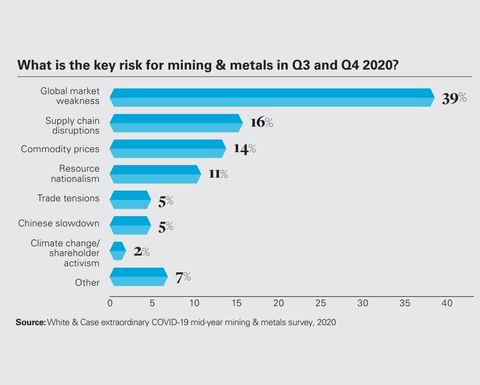 The White & Case mining and metals mid-year report said the industry was an uncertain juncture at the mid-point of 2020, with the demand for raw materials stalled due to COVID-19 and "no real history to guide investors to the future with any real degree of confidence".

The survey found global market weakness gained 39% of the vote in terms of the key risk facing the sector in the second half.

Trade tensions, which had been deemed the biggest risk in January, had dropped from 26% to 5% in the latest survey.

The report authors also noted concerns about a slowdown in China had fallen from 24% in January to 5%.

"Perhaps the fact that China appears to have been first in to the crisis and first out, coupled with Beijing's appetite to spend its way out of slowing growth, is behind this reading," they said.

The report said miners had withstood the impact of the global pandemic better than other industries, thanks to their efforts to strengthen balance sheets since the 2015 crisis when demand in China slowed.

More than a quarter of respondents - 27% - said building resilience was the top priority for the mining sector, to be achieved through raising standards in the supply chain.

"A stunning 80%" thought environmental, social and governance (ESG) factors would play a greater part in investors' decision-making, the survey found.

"However, the relative importance of the ESG agenda for the sector in the medium term has clearly been called into question by the impact of coronavirus and the global economic downturn," the authors said.

In terms of what would likely lure non-specialist institutional investors to the sector, 18% said exposure to the battery minerals supply chain.

Shareholder returns and improved ESG performance were equal second with 14%.

Resource nationalism was chiefly expected to present challenges in Africa, with respondents expecting higher taxation to be the main tool used by governments.

The report pointed to the recent flare-up in Zambia where the government had threatened to strip Glencore of its mining licence in April after the company closed a key mine citing weak prices and COVID-19 disruptions.

"Such is the importance of mining to many African countries—with fewer levers to pull during a global recession—they simply cannot afford to lose a core revenue stream at a time of macro uncertainty, which may tempt them towards more nationalistic behaviour," it said.

Some 49% of respondents believed precious metals would see the most M&A activity, with one-third expecting distressed M&A to be on the agenda as the economic slowdown forced deals.

Recent data from S&P Global Market Intelligence had shown the market for gold deals was heating up.

The strengthening gold price meant miners were more able to execute deals and were in greater demand as investors sought exposure to the metal, the White & Case report authors said.

"Given fairly stable all-in-production costs, the lure of each dollar increase translating into profit is bringing previously marginal mines back into play as viable assets, so interest in the sector can be expected to remain very strong," they said.

Gold was also tipped to recover strongly following COVID-19, attracting 33% of the vote, behind copper which polled 39%.

"The spectre of further waves of infections is undoubtedly the elephant in the room regarding coronavirus," the report said.

"This is the most significant factor that will determine whether this apparently swift recovery can be sustained.

"If this does prove to be a V-shaped recovery (rather than a wobbly revival hampered by further waves of infection or, in the worst case, a prolonged downturn), the momentum at the turn of 2020 that appeared to be behind a more sustainable future for the sector should be maintained."

ESG gone but must not be forgotten