Each new revolution of the commodities cycle is different and the current upswing in pricing and sentiment has its own unique signature. Though commodities have recovered across the board from their nadir in late 2015, the excitement has not been around precious or base metals, nor the bulks, but generated by a commodity set of previously limited profile - lithium, cobalt and graphite, or the battery metals.

Also becoming interesting in this cycle - and with some association with the battery metals - has been little-known borates. In contrast to battery metals, borates have not exploded onto the scene, in fact, the gradual market enlightenment has been more by happenstance.

The most famous citation of borates and the project largely responsible for the growing interest is Rio Tinto's Jadar lithium-borates deposit in Serbia.

Jadar has captured imaginations for a number of reasons, starting with its scale: with 136 million indicated tonnes for 21Mt of B2O3 and 2.5Mt of Li2O, it ranks as one of the largest undeveloped lithium resources in the world and a significant boron resource.

Secondly, it is owned by the world's second-largest miner by market capitalisation and represents a strategic departure from hydrocarbon energy toward battery raw materials. Rio already has a tidy borates business from its California operation.

And, finally, the combination of the minerals in play appear, superficially at least, to be the strangest of bedfellows; lithium is still sexy and growing rapidly, while borates are very much unsexy and growing at around 6%.

In an ideal world, the two products would work side-by-side, with the predictable borates market looking after the operating cost leaving Rio fully exposed to the leverage on lithium.

The case for Jadar's development will consider whether it can reach full confidence in a process route for a mineral that's never been commercially produced; how engineers feel about negotiating the depth and faulting at Jadar; and whether to risk a potential fallout from injecting more supply into a relatively small borates market to access the lithium space, though at current market growth rates and Jadar's expected production, this feels a lower priority.

This publicity has made life that much easier for what might be described as two ‘mini-Jadars' - projects also looking to be developed as lithium-borates operations. The more established Global Geoscience (ASX:GSC) and newcomer, American Pacific Borate & Lithium (ASX:ABR), are both ASX-listed with US projects near-ish to the Rio mine.

Global Geoscience has been trading largely on the back of its lithium exposure, while American Pacific is more of a borates story.

Unlike most mineral development scenarios, and compared to Jadar, there is something to be said for both companies' relative lack of scale. Both Global Geosciences and American Pacific, though prioritising different minerals, plan to leverage the by-product model but neither will produce at a level likely to upset the current market applecart.

In fact, much like the case for potash and iron ore, lithium and borates are dominated by a handful of players and end-users would welcome diversity of supply. For lithium, this will not last as the crop of new producers emerge but, for borates, that situation is acute.

Boron not as boring as you thought

This forensic examination of borates, chiefly to build arguments for and against Jadar, is educating the market on what the borates market has traditionally looked like and what it may look like in the future.

It's a fairly mundane product. Not that being predictable should be necessarily seen as a negative, but the reality is many investors look to commodities for leverage to an exciting growth story.

Borates have traditionally been used for a variety of everyday products that hardly get the pulse racing. We're talking about insulating materials (19% of end-user market), ceramics (16%), agriculture (13%), specialised glass (11%), and household chemicals and detergents (11%).

In this sense, the borates space has, historically, closely tracked global GDP numbers as the ability of the world's population to buy more household products has driven the use of boric acid.

But this is changing. Borates are now linked to two areas of potentially strong growth, giving investors that blue-sky story many need to clear investment-return hurdles. The first is through and existing application and the second through exposure to the best-known growth market of all.

That existing application is in agriculture and is fuelled, essentially, by the same fundamental driver as that which has spurred fertiliser minerals such as potash and phosphates - the world's population is growing and there is increasing pressure to feed that population well.

Boron, specifically, increases the quality of the soil allowing less arable land to be tilled. It is therefore receiving indirect government support in places like India, where subsidies are handed to farmers to improve production. 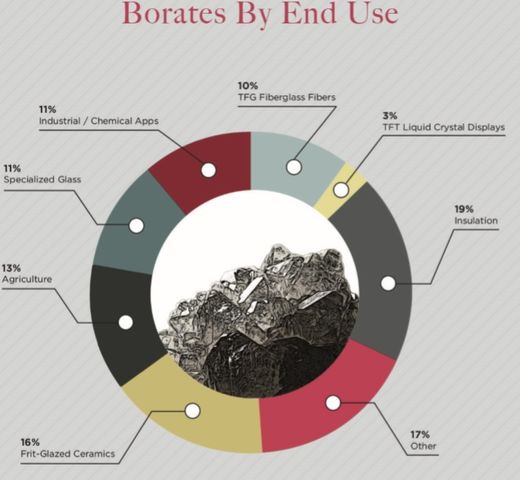 There is also a strong argument that borates demand - given its breadth of use across household products and increasing application in electronics - should see a spill-over effect from the standard urbanisation story that drives many of the mainstream metals as more Chinese and Indian people move from farms to houses.

The increasing use in electronics provides a window into the second leg of the growth story. Boron-laden permanent magnets are widely consumed, including as the most commonly used magnets for hybrid and electric vehicles.

So, while hardly a ‘battery metal', borates do share a commonality with lithium other than that geologically evidenced within the Rio, Global Geoscience and American Pacific projects.

Borates are not the key ingredients in either agricultural or battery applications but they are important enough to cause a stir in a small market and, more importantly, substituting them out is not currently possible.

"The recent growth in electrical and electronic industry globally is projected to further augment the demand for boron in the next few years," a report from Transparency Market Research stated. "Looking forward, the demand for borate from the wood industry is also anticipated to show strong growth."

The supply side of the equation is more interesting again from an investment perspective given, like potash and other bulks to varying degrees, the borates space is controlled by just a handful of players.

The export market is, in fact, an oligopoly dominated by output from Rio Tinto's California operation (through its subsidiary, US Borax), which accounts for 30% of the entire market, and from Turkey-government-controlled Eti Maden, which delivers 43%. Meanwhile, Chinese producers account for 14%, supplying a little over a third of its domestic market.

There are only a couple of companies aside from those mentioned already even considering bringing new product into the market.

The problem for those looking at leverage to borates as an alternative to the current volatility in mainstream metal markets is the lack of opportunities for entry - no one is going to buy Rio, a circa US$100 billion company, for its borates exposure.
There are a couple of pure borates operations.

London-listed (AIM:BCN) Bacanora Lithium has the Magdelana project, though that is not a priority for the company, which is focused primarily on its Sonora lithium project in, as the name suggests, Sonora, Mexico. Toronto-listed Erin Ventures (TSXV:EV), meanwhile, has delivered a promising indicated resource at its Piskanja deposit in Serbia of 5.6Mt at 30.8% B2O3. However, after filing a preliminary economic assessment in 2014 and stating in a 2016 presentation its objective to "rapidly develop" the project, the company continues to drill and, as 2018 gets long in the tooth, the next stage of technical studies is yet to surface.

That would seem to make the two lithium-borates juniors mentioned earlier the most likely opportunities for exposure.

Global Geoscience is the most mature from a market standpoint. Its 460Mt resource with 4.1Mt of lithium and 11.3Mt of boric acid from the Rhyolite Ridge project in Nevada is well known to investors and the subject of an eagerly anticipated prefeasibility study. One issue for the project is its host mineral (searlesite), which, like at Jadar, does not have a history of commercial production. However, testwork appears to show this is a hurdle simple enough to overcome.

American Pacific was only introduced to the market a little over a year ago but it's project, Fort Cady in California, is more advanced, having previously been brought into production and with a scoping study showing a low-capital expenditure, high margin operation based only on the borates. The updated boric acid resource of 13.9Mt will form the basis of a definitive feasibility study due in the coming months, which will also factor in lithium production - the JORC mineral estimate for Fort Cady is 120.4Mt at 6.50% B2O3 and 340ppm Li.

As with all development projects, these carry their risks, however, they also offer exposure to the exciting but unproven upside of lithium, as well as the predictably accelerating borates market. As mainstream commodities pause for breath and attempt to take stock of an uncertain global economy, borates are at least worth further investigation.