PolarX is an advanced ASX-listed mineral exploration company. The recently formed PolarX brings together a suite of exciting copper and copper-gold assets in Alaska. High grade existing resources and numerous large, unexplored advanced targets, within a 35km mineralised belt, are now under PolarX’s control and direction 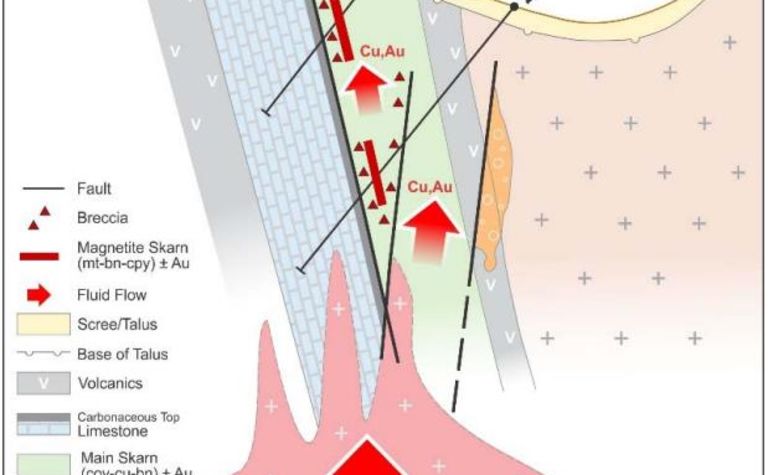 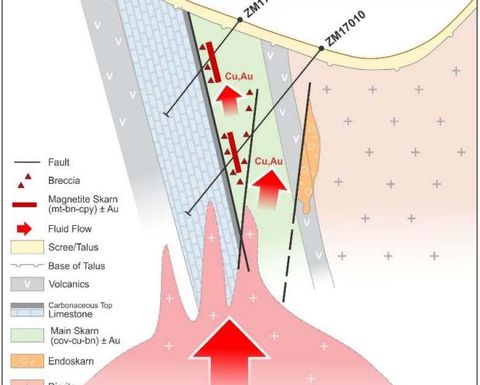 PolarX is an advanced ASX-listed mineral exploration company. The recently formed PolarX brings together a suite of exciting copper and copper-gold assets in Alaska.  High grade existing resources and numerous large, unexplored advanced targets, within a 35km mineralised belt, are now under PolarX's control and direction.

The ~2,000m core drilling program at the Zackly Project was completed in early October 2017 and assay results should be available in late-November and through December.

The drilling at Zackly confirmed the presence of copper and gold mineralisation consistent with a skarn deposit overprinted by high level porphyry copper-gold and epithermal mineralisation.

Induced polarisation (IP) surveys have been completed at Zackly and the Senator and Mars prospects. Results from the Mars prospect show a buried chargeability anomaly located 100-150m below the surface geochemical anomalism, consistent with a buried mineralised porphyry Cu-Au system.

This anomaly lies only 6km from Zackly, a known skarn deposit, along a mineralised structural corridor which may host multiple buried porphyry Cu-Au deposits.

Similarities with other major ore bodies in similar geological settings draw further attention to the significant exploration upside of the area.

Good examples of porphyry copper deposits spatially and genetically associated with skarns and/or high-sulphidation epithermal deposits are Grasberg in Indonesia, Bingham Canyon in Utah and Far Southeast in the Philippines.

Similarities exist between the Caribou Dome deposit and Kennicott (300km SE of Caribou Dome) and Keweenaw in Michigan, both classified as basaltic copper deposits as well as Windy Craggy in British Columbia, an alternative deposit model being a variant of a distal VMS system.

The Moonwalk prospect appears to represent a Tintina-type intrusive related gold deposit, examples of which are Pogo, Donlin and Fort Knox in Alaska.

These similarities should in no way be interpreted as confirmation of the presence of economic ore bodies, but simply to highlight the enormous potential.

Since the restructure of the company in mid-September, the share price has almost doubled, suggesting market recognition of the Company's exciting assets.  In addition to the high-grade copper and copper-gold portfolio and numerous advanced exploration targets, there is clearly significant upside potential for larger porphyry copper-gold discoveries.

Early soil sampling work has demonstrated that almost the entire 35km belt is mineralised with copper, gold and silver from surface in various geological forms.  The known high-grade surface deposits at Caribou Dome and Zackly comprise only 2km of the 35km mineralised belt. Opportunity for further discoveries is not limited by scale. 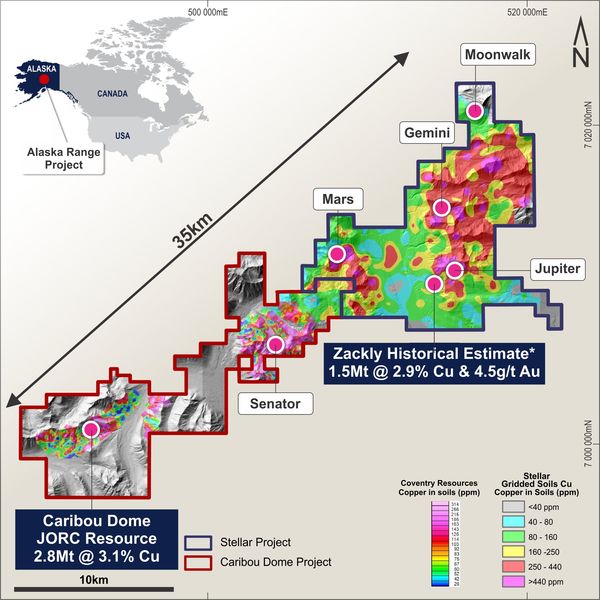 A ~2,000m core drilling program was recently completed at the Company's 100%-owned Zacky copper-gold project.  Of the 13 holes drilled, eleven were drilled to twin historical narrow diameter core collected in the 1980's.  First assay results are due in November with further results to follow in December.  An IP survey was completed across the strike length of the existing Zackly mineralisation and will be used to plan additional drilling in the 2018. Zackly remains open along-strike and at depth and lies within several larger and as-yet untested soil anomalies.

Key observations from PolarX's drilling include:

•Stronger and later overprinting mineralisation events (Phase 2) are also evident in most of the new drill holes, which likely gave rise to veins and disseminations of covellite, bornite and native copper (100% Cu), with local formation of secondary chalcocite (79.8% Cu) 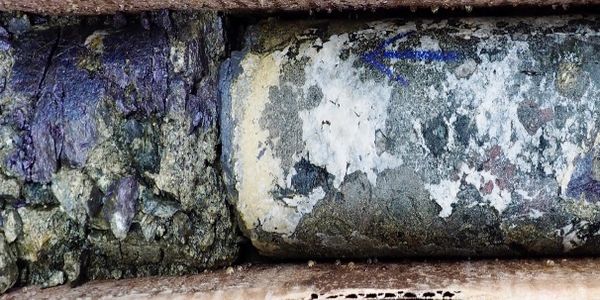 •Zones of massive magnetite-bornite-chalcopyrite skarns up to several down-dip thickness were also present.

•There is also geological evidence for the possible presence of a buried porphyry intrusion. 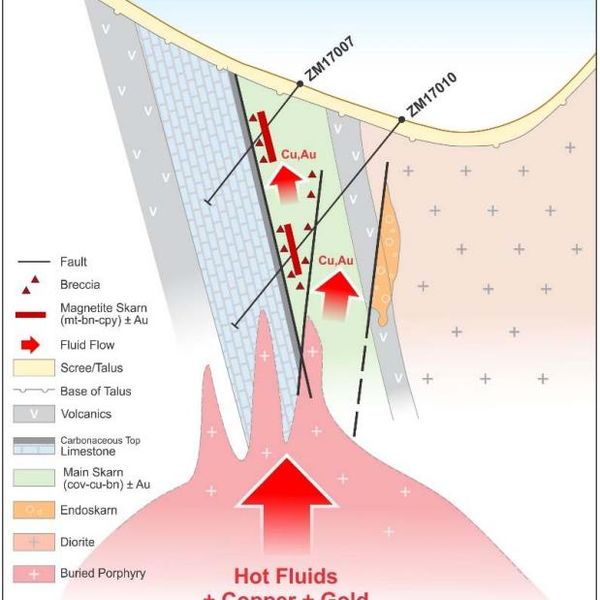 The Mars prospect is characterised by co‐incident copper, gold, molybdenum and silver anomalism in broadly spaced soil samples over a large area of approximately 2,000m x 1,500m.  Up to 7.4% Cu and 1.8g/t Au is evident in rock‐chip samples.

PolarX conducted an initial IP survey over the Mars prospect in late August 2017.  The IP results show a buried chargeability anomaly located 100‐150m below the surface geochemical anomalism.  This is consistent with a buried, mineralised porphyry Cu‐Au system.   The full extent of the chargeability anomaly is not yet known as the anomalism extends to the edge of the 800m wide survey area which lies within the 2km long soil anomaly.  Further IP surveying will be undertaken to map out the full extent of the IP anomaly, along with core drilling to evaluate the anomaly. 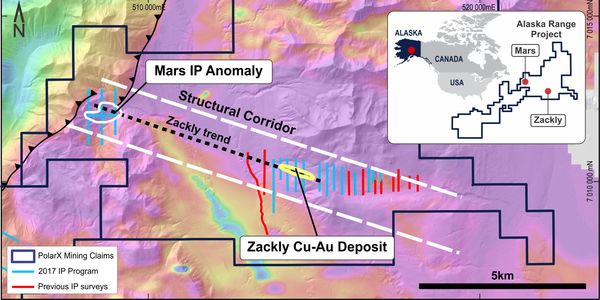 Both skarns and high-sulphidation epithermal deposits are spatially and genetically associated with porphyry copper deposits around the world.

Zackly is a skarn deposit, formed where hydrothermal fluids (probably derived from a nearby porphyry copper deposit) reacted with silty limestones to deposit copper sulphides and gold.  Most skarn deposits contain pyrite, magnetite and chalcopyrite as the main ore forming minerals. Zackly is unusual in that it is dominated by bornite, covellite and magnetite, with lesser amounts of native copper and chalcocite. The latter (native copper and chalcocite) may represent a supergene overprint, but the bornite and covellite appear to be the original (hypogene) copper minerals present.  There are also reports of enargite and tennanite, both of which are copper-arsenic sulphides. Their presence, and the high-tenor nature of the copper sulphides (bornite and covellite), suggest there may be an element of a high-sulphidation epithermal overprint at Zackly, again suggesting a nearby porphyry copper system.

Perhaps the best example of skarns and high-sulphidation deposits that are associated with copper porphyry is the massive Grasberg mineralised complex in Indonesia. Production began at the Ertsberg deposit in 1972. Until around 2012, Grasberg was the world's largest gold mine and second largest copper mine.  In 2016, it was ranked second in copper production and fourth in gold production. It currently (2016) has ore reserves of 2,059Mt at 1.06% copper, 0.86g/t gold and 4.48g/t of silver.

Bingham Canyon in Utah is another supergiant porphyry copper deposit with multiple associated skarns. The Bingham Canyon Mine, which today is the largest man-made excavation in the world, was developed in the early 1900's and is considered to have produced more copper than any other mine in US history - more than 19 million tonnes.  The porphyry is zoned, with a central core containing magnetite, followed by a molybdenum zone low in copper, a bornite-chalcopyrite-gold higher grade copper zone, a pyrite-chalcopyrite zone, a pyrite zone and an outermost lead-zinc zone.

The third example of porphyry copper and skarn deposits is the giant Far Southeast porphyry copper in the Philippines which contains 650mMt @ 0.93% Cu and 1.3g/t Au. The nearby Lepanto high-sulphidation epithermal deposit sits 500-600m above the porphyry and contains ~35-40Mt @ 2.3% Cu and 2.1g/t Au.

Porphyry copper deposits are formed from hydrothermal fluids that originate from magma chambers several kilometres below the deposit itself.  The host rocks are altered and genetically related granitoid porphyry intrusions as well as adjacent wall rocks. The deposits consist of disseminated copper minerals and copper minerals in veins and breccias that are relatively evenly distributed in large volumes of rock, forming high tonnage (usually greater than 100Mt and sometimes exceeding 2Bt), low to moderate grade (0.3%-1.5%) copper ores.

Caribou Dome is characterised by the presence of very fine-grained copper and iron sulphides (chalcopyrite and pyrite) hosted by graphitic, calcareous volcanic sediments within a thick package dominated by andesitic volcanic rocks known as the Nikolai Greenstones. Individual ore bodies occur as lenses and tabular bodies ranging in size from 10s to 100s of meters of strike length and down-dip extent, and metres to 10s of metres in thickness.  The Senator prospect appears to have similar potential.

The mineralisation style has been classified by the United States Geological Survey (USGS) as a ‘Basaltic Copper Deposit' due to the association with the Nikolai Greenstone, which, in places, contains native copper in cracks and vesicles. Two good examples of this style of mineralisation are described below.

The Kennicott deposit, which is located approximately 300km southeast of Caribou Dome, was discovered in 1899. The deposit was mined almost continuously from 1911 to 1938.  Several individual lodes were mined. During this period, approximately 4.2Mt of ore was mined to produce around 436,000t of copper at an average recovered grade of almost 13% Cu. It contained massive chalcocite and covellite (locally native copper) at the major boundary between the Nikolai Greenstone and the overlying Chitistone Limestone. Caribou Dome sits at or very close to the equivalent stratigraphic level.

Keweenaw in Michigan has two main styles of ore. The first is the Keweenaw deposits themselves which contain native copper and chalcocite in basaltic flow tops and vesicles in the basalts and interflow sediments. The best example is the Calumet and Hecla Mine which contained 65Mt @2.85% Cu.  The other style of mineralisation is sediment hosted copper sulphides at Porcupine/White Pine with resources of 180Mt @ 1.14% Cu and 8g/t Ag.

An alternative deposit model for Caribou Dome worthy of consideration is a variant on a distal VMS system. The largest example in the region is Windy Craggy in northwest British Columbia, which hosts 297Mt of 1.4% Cu and 1.6g/t Au. These deposits are otherwise known as ‘Besshi-type' for their resemblance to the late Paleozoic massive sulphides at the Besshi mine in Japan. They are characterised by conformable stratiform blanket-like sheets of massive pyrrhotite and/or pyrite with variable contents of chalcopyrite and minor sphalerite.  Copper is the principal economic mineral and there is subordinate zinc, silver and/or gold.  The ores occur in submarine mafic volcanic rocks and associated marine sedimentary rocks.

The DeGrussa mine in Western Australia is another example of a distal VMS deposit. The definitive feasibility study was based on a total mineral resource of 14.3Mt @4.6% Cu and 1.6g/t Au. After the deposit was identified as a VMS system, exploration in the area focused on finding additional deposits of a similar nature and the efforts were rewarded with the discovery of another VMS deposit, the Monty Project, located 10km east of DeGrussa, several years later.

The Moonwalk prospect appears to be a Tintina type intrusion related gold deposit in that it contains a quartz-veined, auriferous granodiorite which has intruded black shales. Gold grades in rock-chip sampling at Moonwalk to date range between 0.5g/t and 31g/t Au.

Aetas Global Capital Pte Ltd was tasked to have an independent third party report produced on the Stellar and Caribou Dome projects for PolarX Ltd Board.  This publication is intended solely for informational purposes. The information in this publication is not to be construed, under any circumstances, as an offer to sell or a solicitation to buy, sell, or trade in any commodities, securities, or other financial instruments presented.  Any publicly-obtained information contained herein is assumed to be reliable, but is in no way guaranteed.  All investments are subject to risk, including the possibility of the complete loss of any money invested. You should consider such risks prior to making any investment decisions.