Buried in BHP’s just-released third quarter report was a much-anticipated update on its Oak Dam copper discovery in South Australia. 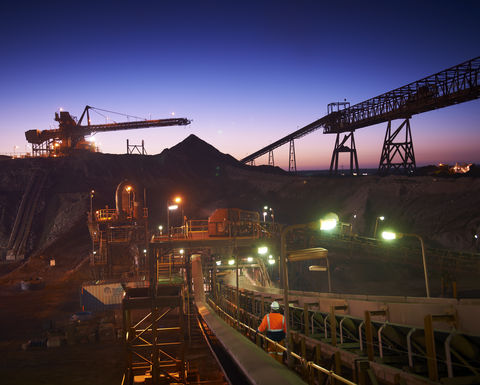 BHP said recent drilling continued to confirm IOCG-style alteration and mineralisation, with a core of barren hematite-quartz breccias approximately central to the gravity anomaly, surrounded by high-grade chalcocite and bornite mineralisation, which grades outwards to more dominant chalcopyrite and pyrite mineralisation towards the contact with the host granite.

Further drilling will start next month.

Oak Dam is 65km to the southeast of BHP's Olympic Dam mine and 45km northeast of OZ Minerals' commissioning Carrapateena mine.

Meanwhile, BHP reported a 3% fall in copper-equivalent production across the group for the September quarter, largely due to planned maintenance and natural field decline in petroleum.

Iron ore production was 61 million tonnes, down 3% over the June quarter due to planned maintenance at Port Hedland.

Metallurgical and energy coal production each dropped by more than 20% due to maintenance, higher strip ratios and weather.

Nickel output of 22,000t was down 25% quarter-on-quarter due to maintenance and the transition to new orebodies.

BHP CEO Andrew Mackenzie said the company had made a solid start to the new financial year.

"While group production for the quarter decreased slightly due to the expected impacts of planned maintenance and natural field decline in petroleum, guidance remains unchanged and we are on track to deliver slightly higher volumes than last financial year," he said.

"The South Flank iron ore project is 50% complete, with all our major projects on schedule and budget."

BHP said it expected the Jansen potash project in Canada to be put to the board for a final investment decision by February 2021.

The board approved US$144 million to support project planning and on finalising the port solution. An additional $201 million in funding was approved to further de-risk the project.

Oak Dam moved to the next stage