Development-stage Sabina Gold & Silver continues to affirm the wider discovery potential at its flagship Back River project in Canada’s Nunavut Territory, with final results from spring drilling on the Nuvuyak discovery of 2018 confirming its importance, the company says. 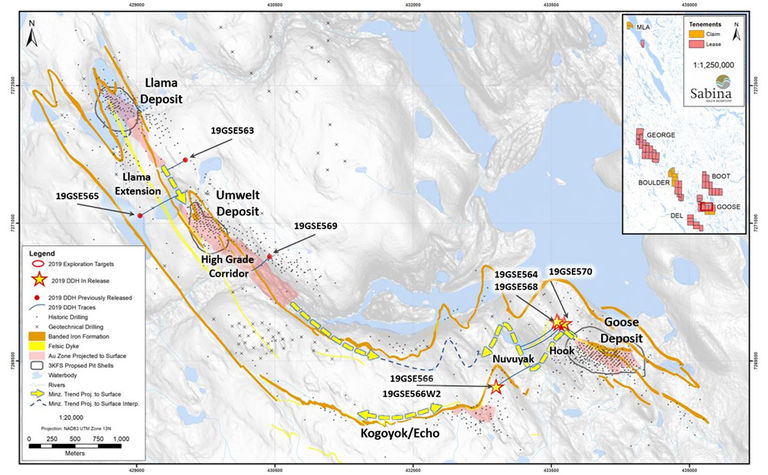 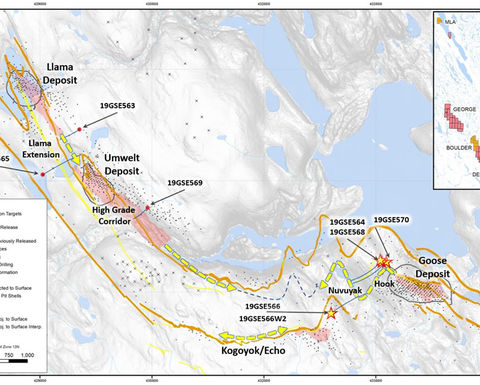 Recent drilling at Nuvuyak confirmed the potential for a significant new deposit, according to Sabina Gold

The results from Nuvuyak returned included high-grade values over significant widths within a broadly mineralised iron formation, with evident similarities to other Goose Gold Complex deposits at Umwelt, Goose Main and Llama.

Two other holes corroborated information gleaned from prior drilling and confirmed the Nuvuyak gold zone to have a strike length of at least 370m, about 1,000m below surface, Sabina said.

The company's systematic exploration of the Goose Gold Complex was delivering results. Targeted drilling had extended the strike length of the Llama underground zone to more than 1,200m below the planned Llama openpit and remained open at depth.

The high-grade corridor of mineralisation within the Umwelt underground Vault zone showed it extended up plunge and remained open to depth.

"We are continuing to assess and evaluate the results from this spring and the last two years to better understand options around resource optimisation and extension and the potential," said CEO Bruce McLeod.

"This work is being done with a view to impact not only growth at Goose and in the region in general, but also to potentially enhance the economics of the already robust initial project."

The Nuvuyak deposit remained open up and down plunge as well as in the down dip direction along the limbs of the anticlinal fold, the company said.

Sabina continues to study how the Back River mineralisation formed. These studies suggest conditions leading to the abundant gold depositing event are consistent across the Goose and other Back River properties, underscoring the prospective nature of the district.

Sabina shares (TSX:SBB) are rising with the gold price momentum of the past two months and added 5.84% on Tuesday to close at C$1.63, which gives the company a market capitalisation of $475.14 million. The stock is up more than 33% in the year to date and gained 12% over the past 12 months.