Speculation the gold industry had seen 'peak production' was overdone and did not corroborate with the fact that the world’s top gold producers held enough resource firepower in their portfolios to keep the industry going at current levels for another 50 years, according to the head of mine economics at Metals Focus, Charles Cooper. 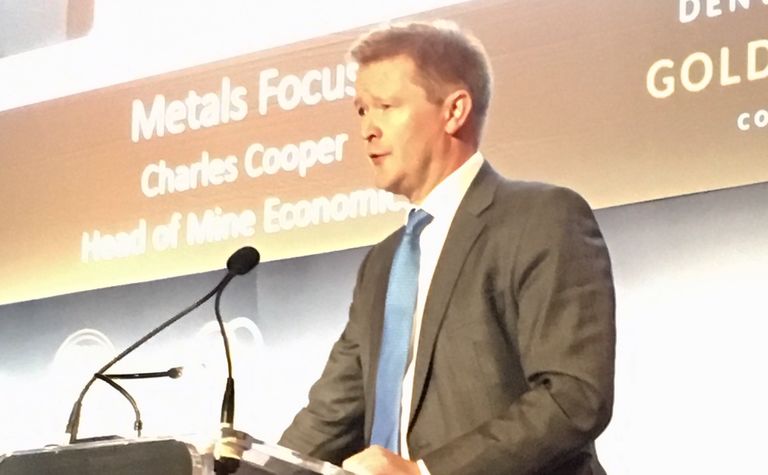 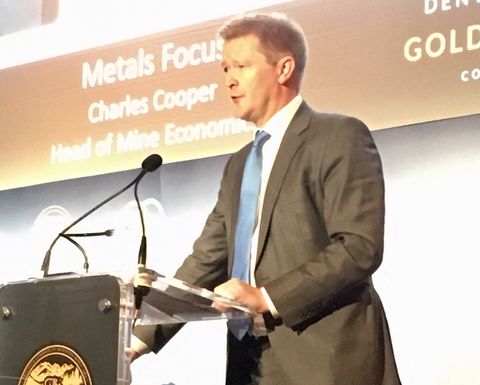 Head of mine economics at Metals Focus Charles Cooper

Cooper pointed out to an audience at the Denver Gold  Forum at Colorado Springs, the top 10 gold producers had lost significant market share over the past eight years. Exploration had failed to deliver new world-class orebodies, and more recently, efforts to rebuild balance sheets were leading to asset sales and constraints on project development.

"Mine supply growth over the past decade has been driven by the growth in the production from intermediates and juniors, privately owned companies in Russia and China, and artisanal and small-scale miners. Intermediate and juniors' projects outnumber those belonging to majors, with the 12 largest projects expected to add only about 2.9 million ounces a year over the next several years," he said.

This was evidenced by the decreasing dominance of Barrick Gold (TSX:ABX) and Newmont Mining (NYSE:NEM), among others. The top 10 companies were expected to decline from contributing about 30% of global production in 2010, to 20% in 2025.

Market realities further entailed the industry facing higher throughout rates at lower grades in future operations. Grades were expected to fall from about 1.6 grams per tonne (g/t) to a hair above 1.2g/t by 2025.

He flagged an emerging 14-million-ounce supply gap between today's global output and the 92Moz production forecast for 2025. Adding to the emerging supply gap was the fact that 18 megaprojects were facing significant delays of 20 or more years, and languished in the definite feasibility stage since the 1990s because of political and economic reasons.

"Technical innovation and a higher gold price would be needed to cover the shortfall."

Other potential gold supply disruptors include increasingly complex orebodies, the 'right-sizing' of projects, Chinese environmental cleanup and Russian politics and the availability of finance. "Talk of ‘peak gold' is overdone. We expect a transition over the next 24 months from balance sheet rebuild to growth," Cooper said.

Picking up the slack

While the majors remained constrained by debt reduction imperatives, the juniors were now increasingly seen successfully accessing capital and driving new project development. A strong project pipeline in Canada and Russia was also being supported by an ease of permitting in these jurisdictions, he said.

Significant centres for continued production growth in the past year were Canada, adding 10% to produce six-million ounces, Australia adding 4% to 10Moz, Russia adding 5% to 9Moz and Mongolia adding 27% to 1Moz. Western Africa was also showing double-digit growth in the past 12 months.

Among the notable decliners were South Africa falling 8% in the year to 5Moz, the United States falling 4% to 8Moz, and global leader China dropping 7% to 13Moz.

"Even though fewer mines have come on line in the past two years, more than 26Moz of collective capacity have been brought on line. That's equal to 26 Goldstrikes or 11 Grasberg mines," he said.

"Small-scale and artisanal growth were impressive, adding 10Moz in the past eight years."

This had helped offset more than 13Moz of closures and product losses, Cooper's research showed.

At prices of around US$1,200/oz, companies in the highest-cost 10% of the all-in sustaining production cost curve hadbeen treading water over the past several quarters.

One positive was that underlying cost pressure seemed to be easing, on the back of many producer currencies having weakened over the past 12 months in comparison to the stronger US dollar. This helped ease the impact of continued inflated diesel, electricity, grinding media, cyanide and caustic soda costs.

An emergent trend showed despite the seniors remaining cash-flow positive, their capital expenditures commitments were currently wiping out the potential for shareholder returns. Notwithstanding, capital expenditures were also down year to date, in step with the softer gold price.

The majors had paid $13.3 billion in dividends since 2009, but showed a tepid collective performance in 2017, returning only $1.5 billion to shareholders. This paled in comparison against Rio Tinto's $15 billion, including $9.2 billion in buybacks, over the same period.

The companies with the biggest expansion potential included Polyus at 30% by 2020, Polymetal at about 27% by 2020, and Yamana Gold and Goldcorp adding about 23% in the same time frame.

Cooper commented on the Barrick-Randgold mega tie-up and pointed out another peculiarity of the deal was that Randgold guidance was forecast to grow 28% by 2021, while Barrick's right-sizing exercises meant it was still producing substantially fewer ounces compared with its former production levels. This would result in the combined entity having a net zero pro forma production growth pipeline out to 2021.

"Should a merger go through, there is a lot of room to reduce corporate costs too. Randgold currently has very disciplined corporate and administrative costs at about $24/oz, compared with Barrick's $74/oz in Q2 2018, setting the stage for the combined company to significantly reduce its cost profile from the get go."

Shenghe buys out Appian from Peak

Lithium: Off-peak but not out of steam, says HSBC