MC Mining Limited (JSE:MCZ) saw its shares jump 50% Tuesday after it was granted a mining right for its 74%-owned Chapudi coal project in South Africa Limpopo province after a five-year wait. 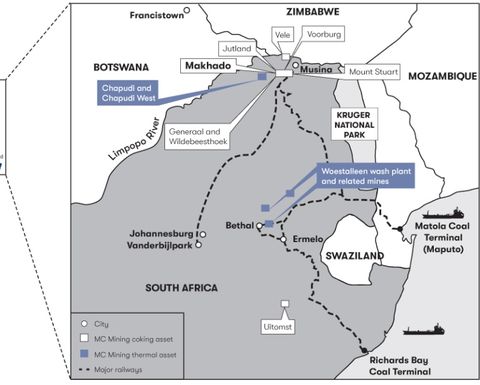 Chapudi, along with the Mopane and Generaal projects, make up the company's Greater Soutpansberg project close to the planned Musina-Makhado Special Economic Zone, which has been designated by the government as an are focusing on energy and metallurgical processing.

The right is the first of three applications lodged with the department of mineral resources in 2013 for the Greater Soutpansberg project.

CEO David Brown said the granting of the right was a "key step in unlocking value" from the company's coal assets and positioned the Greater Soutpansberg project as a potential long-term coal supplier to the special economic zone.

"The Mopane and Generaal project mining right applications are at an advanced stage and we anticipate that these will be granted in the near future," he said.

"Following this, the company will commence with the various studies required for the outstanding water and environmental regulatory approvals."

MC is also advancing its flagship Makhado coal project where it recently concluded a hard coking coal offtake agreement and is progressing negotiations for funding initiatives and off-take agreements for the rest of the project's coking and thermal coal.

Shortage of supply will boost industry in the long term