Barrick Gold and Newmont Mining will combine their Nevada assets in a joint venture producing more than four million ounces a year of gold, just three weeks after the Mark Bristow-led Barrick pitched a full takeover offer for its rival. 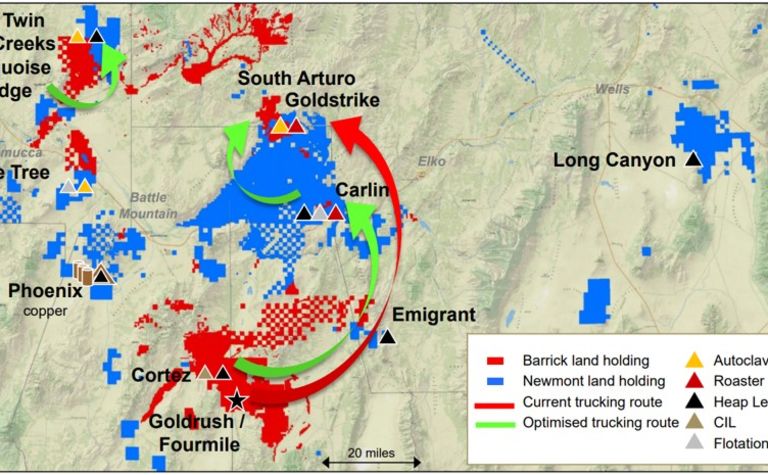 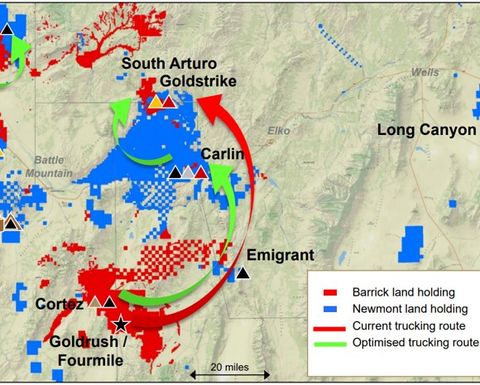 Transportation synergies in the Nevada Complex

The JV agreement cancels the takeover bid.
Barrick said the deal would allow the partners to capture an estimated US$500 million in average annual pre-tax synergies in the first five full years of the combination. Over 20 years, the JV is projected to net some $4.7 billion in pre-tax net present value.

Bristow said the agreement marked the successful culmination of a deal more than 20 years in the making.

"We listened to our shareholders and agreed with them that this was the best way to realize the enormous potential of the Nevada goldfields' unequalled mineral endowment, and to maximise the returns from our operations there," he said.

"We are finally taking down the fences to operate Nevada as a single entity in order to deliver full value to both sets of shareholders, as well as to all our stakeholders in the state, by securing the long-term future of gold mining in Nevada."

It does not include development assets such as Fourmile, Mike and Fiberline although they may be brought in at a later date if investment hurdles are met. These can either be sold into the JV or the JV shareholders will be diluted as new assets enter.

Bristow had been bird-dogging Newmont's Nevada assets since taking the helm of the world's largest gold producer following the completion of Barrick's merger with Randgold Resources in January.

Recent weeks saw Bristow launch an unsolicited, no premium bid for Newmont which provoked a heated exchange between the two companies on the subject of the generation of shareholder value.

Key synergies and value creation will come from optimising logistics of trucking ore around the state to the closest or most appropriate processing facility, something Bristow championed throughout his assault on Newmont.

"When you get near the bottom of the oxide and transitional material in the pits and into sulphide ore, you need access to infrastructure at significant cost and long permitting times," commented Bristow during a conference call. Through the JV, Barrick's operations get access to Newmont's superior portfolio of processing facilities.

The JV will include a large exploration land package. Both Barrick and Newmont will receive a 1.5% net smelter returns royalty from any production that results from mineral resources and reserves discovered beyond the reserves and resources initially vended into the JV.

Not everyone agrees with the amount of synergies the JV can deliver, including Newmont's former president, and chairman of royalty company Franco-Nevada, Pierre Lassonde.

"$500 million a year is a mirage in the desert. … The last couple of years have seen both companies taking a lot of costs out of Nevada," he said on BNN Bloomberg's Andrew Bell Live during the PDAC last week.

As suggested by Mining Journal last week, the full-scale assault by Bristow masked his true aim, which was forcing a deal through to unlock value in Nevada where Barrick has extensive mineral resource and exploration potential but few plants, while Newmont has a range of processing facilities but lacks the mineral endowment.

During a frenzied exchange of press releases, Newmont was often on the back foot and having to defend its decision to merge with Goldcorp, which Bristow deemed a company with an inferior project portfolio, rather than opt for the value creation that would stem from joining the Nevada assets.

Newmont president and CEO Gary Goldberg meanwhile rebuffed Barrick's hostile approach by stating a JV for the Nevada assets was a better idea than a full-blown merger.

"This agreement represents an innovative and effective way to generate long-term value from our joint assets in Nevada, and represents an important step forward in expanding value creation for our shareholders," said Goldberg in a statement.

Following the completion of the JV, the Nevada complex will be the world's single-largest gold producer, with a pro forma output of more than four million ounces in 2018, comprising three tier one assets, with another in the making, and 48 million ounces of reserves and 28Moz of resources.

The news will come as a relief to Goldcorp whose merger with Newmont had been put in doubt as a result of Barrick's hostile bid, and in particular a handful of its executives who are due to receive some $28 million in change of control payments following closure of the merger.

"Goldcorp also welcomes the announcement that Barrick has agreed to withdraw its proposal to acquire Newmont," the company said in a statement.

Bristow's bird-dogging of Newmont's Nevada assets was made under a clarion call of capturing lost value—or the missing billions as he called them—for mining sector shareholders.

Newmont's merger with Goldcorp provides ready evidence of the sector's largesse and squandering of resources, which has not gone unnoticed by the Shareholders Gold Council.

The SGC is up in arms over some of the pending Goldcorp pay-outs, in particular the way its chairman Ian Telfer was able to amend the term of his employment agreement following Newmont's merger bid for the company to increase his personal pay-out.

Under his amended agreement, Telfer will be entitled to receive a lump sum payment retirement allowance from Goldcorp of about $12 million, up from an original $4.5 million.

"The SGC expresses its condemnation for Goldcorp's board for approving this gratuitous additional payment to Mr Telfer ... the Goldcorp board's approval of this additional retirement allowance to Mr Telfer is another showcase example of directors choosing cronyism over the interests of shareholders," it said in a statement.

The large pay-out comes after the failure of Goldcorp's 20-20-20 strategy implemented by president and CEO David Garofalo to raise production 20% by 2020 while also cutting costs by 20%.

What the company actually achieved, according to a presentation be Joe Mazumdar of Exploration Insights at the 2019 Prospectors and Developers Association Conference in Toronto was, "a 20% reduction in its market capitalisation" since its launch.

SGC observed that Goldcorp's stock has lost nearly 60% of its value under the chairmanship of Telfer.

"SGC asks that the Goldcorp board and the Newmont board each publicly state how increasing Mr Telfer's retirement allowance benefits their respective shareholders," it said.