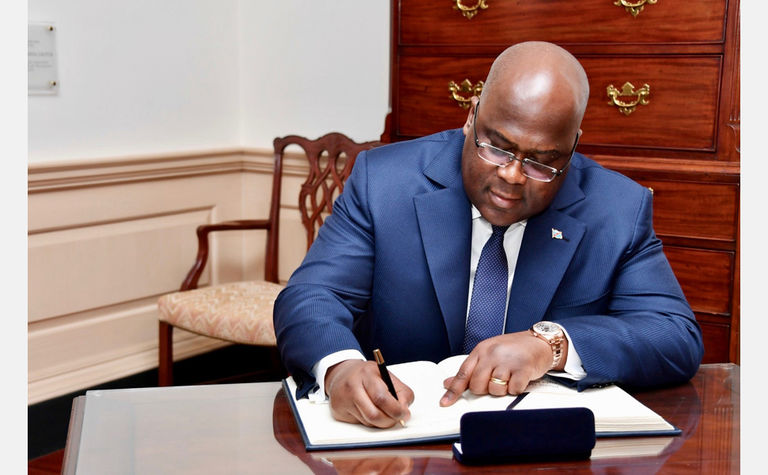 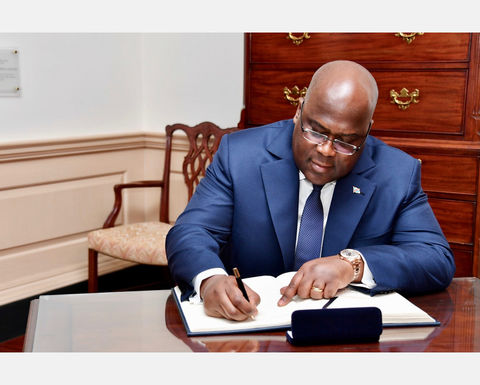 Direct expropriation, especially without any form of compensation, remains rare in Africa. Fierce competition for private capital means few governments are willing to risk upsetting investors. But in the last three years, the resource nationalism landscape in 10 of Africa's core mining economies has shifted - and it's not all good news.

Back in 2016, none of these countries featured in the ‘extreme risk' category of our Resource Nationalism Index (see Figure 1). But by 2018-Q3, onerous fiscal changes to both DR Congo and Tanzania's new mining codes meant they became the first two major Africa mining jurisdictions to sit in the highest risk category. As a result, the region's mining hubs now cover the entire spectrum of risk, from ‘low' to ‘extreme,' revealing just how wide-ranging the challenges are for miners operating on the continent. 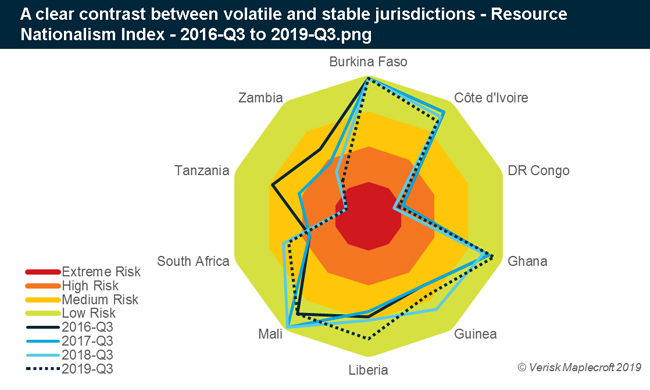 Tanzania, Guinea, Liberia and Zambia stand out as the most volatile countries - and the least predictable. Of these, the most notable are Tanzania and Zambia - the only two countries whose scores dropped consecutively between 2016-Q3 and 2019-Q3.

Tanzania's trajectory is astounding. Upon coming to power in October 2015, President John Magufuli adopted a populist line on the mining sector, introducing an export ban on unprocessed copper and gold. The ban disproportionately targeted one foreign company, Acacia Mining, which was unable to export its output for three years. Magufuli then introduced a new mining code in 2018-Q1, which forced miners to cede a 16% share in assets to the state, and in Acacia's case this was confiscated without compensation.

In Zambia, the downward trend started in November 2016 when the authorities accused Canada-based First Quantum of fraud, culminating in May 2019 with the attempted liquidation of Konkola Copper Mines in a bid to displace Vedanta Resources. These cases illustrate the inherent problems with taking events in isolation; there were clear signs of a deterioration way before expropriation risks emerged.

Signals sent by interventionist governments sometimes appear to echo beyond their own borders. This was especially obvious after large shocks in Tanzania and Zambia in 2017-Q3 (see Figure 2). Over half of all score changes in our Resource Nationalism Index occurred in 2018, making that year almost three times more volatile than 2017, showing just how quickly the resource nationalism picture can swing. 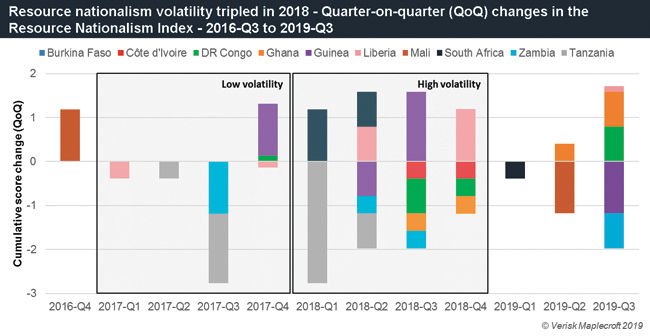 This volatility is best exemplified by Guinea and South Africa. Both have yo-yoed in the index over the last three years, partly due to the enactment and subsequent softening of interventionist or nationalist policies. After President Cyril Ramaphosa entered office in South Africa in February 2018, he oversaw a dramatic reversal of the ruling ANC party's policy agenda, even if it later became plain that it was less radical a U-turn than initially put forward.

Elections had a more direct influence on the course of resource nationalism in some countries. The 2018 election of President George Weah in Liberia led to a clean break with the past government's interventionist tendencies, which had previously cancelled 25 mining licenses. This shift in government approach caused Liberia to enter the low risk category for resource nationalism shortly after.

Where do they go from here?

Looking ahead, one apparent trend is that resource nationalism volatility will fall in many of the countries we examined (see Figure 3). In DR Congo, we expect less volatility over the next year, but without any mitigation of the existing threat of resource nationalism. As recently-elected President Félix Tshisekedi settles into his role, it appears more likely that he begrudgingly accepts - rather than contests - his disadvantaged status in the ongoing power struggle with the ex-president Joseph Kabila. This should mean less regulatory uncertainty for miners, though it does not signify a lessening of the fiscal pressures placed on miners in the past year.

After a turbulent few years under President Magufuli, we expect resource nationalism in Tanzania to both subside and become steadier. This is in part due to the possibility of an opposition win in the 2020 general election. It is equally likely that more technocratic voices in government are reminding Magufuli that he's moved too quickly and that he should focus on mending relations with mining companies. Parliament has already rolled back some local content obligations, but Magufuli is yet to enact them.

In Ghana, although there have been fears of regulatory reform, the most significant risk to investors over the next year will be stricter implementation of dormant provisions of the Mining and Minerals Act. Provided President Akufo-Addo can secure re-election next December, as is probable, resource nationalism volatility will remain low until the mid-2020s.

By contrast, several lower risk countries are likely to display more resource nationalism risks and with no less volatility. Guinean President Alpha Condé's increasingly autocratic ruling style means that resource nationalism will continue to ebb and flow in the country. But risk will rise if Condé is voted out, as the opposition leader Cellou Dalein Diallo is pledging to introduce greater domestic beneficiation. Should Diallo win, he is expected to initiate wholesale reform of the mining sector.

One certainty is that resource nationalism will remain a dynamic issue that mining companies in Africa need to track closely. Data-led monitoring is the only effective method to understand these trends and objectively assess their impact on projects.