The platinum market is forecast to remain in deficit for the third year in a row, with the shortfall expected to deepen to 158,000 ounces according to the World Platinum Investment Council. 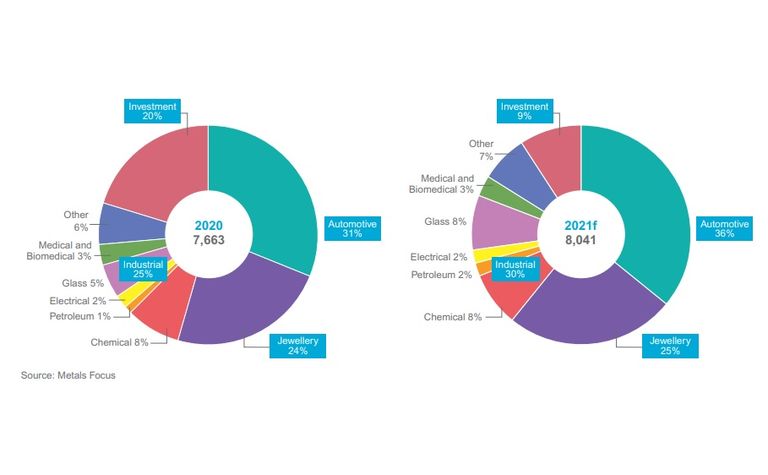 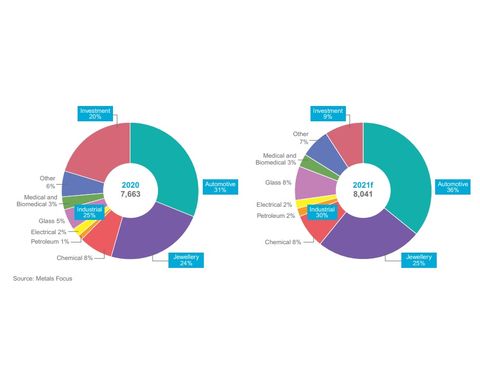 The chart outlining demand end-use shares in 2020 and forecast for 2021, from the World Platinum Investment Council’s latest Platinum Quarterly

This is more than double its previous projected shortfall of 60,000oz for 2021, it said in its quarterly report released this week.

"The third consecutive annual market deficit of -158,000oz in 2021 is mainly due to the strong automotive and industrial demand countering the lower forecast investment demand," Wilson said.

He also moved to allay fears of a supply glut, with some investors fearing Anglo American Platinum's circa 500,000oz accumulated during its ACP converter plant outages in 2020 could be processed quickly through the concentrator this year.

"This is not in fact the case, and Anglo American Platinum has confirmed in public statements in February and April that the processing of the platinum in material built up ahead of the ACP in 2020 will be processed over the course of both 2021 and 2022," he said.

He also referred to the forecast 69,000oz reduction in Nornickel's production due to two significant disruptions in February - flooding at its Oktyabrsky and Taimyrsky mines and a building collapse at the Norilsk Concentrator temporarily closing the plant.

The WPIC said platinum prices averaged US$1,162/oz during the first quarter, up 29% year-on-year and 23% quarter-on-quarter, representing the highest quarterly average price since Q1 2015.