"Sound regulatory regimes are an absolute must"

Finland has been ranked the most attractive jurisdiction in the world for mining investment, according to the Fraser Institute’s annual survey of mining companies. 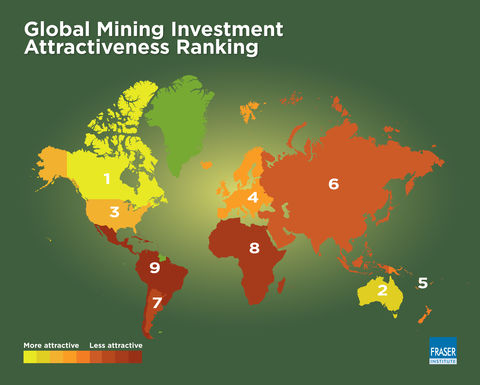 Other jurisdictions in the top 10 were Quebec, Ontario, Chile, Arizona and Alaska.

The 2017 investment attractiveness index ranked 91 jurisdictions around the world based on geologic attractiveness for minerals and metals (through the think tank's best practice mineral potential index) and the extent to which government policies encourage or deter exploration and investment (via the its policy perception index or PPI). This was down from 104 jurisdictions in 2016.

Every jurisdiction in Australia scored lower in the 2017 survey due to increasingly unattractive government regulations across the country.

There were some improvements, particularly in parts of South America, with Chile rising to eighth place after being 39th in 2016. Peru also improved from 28th in 2016 to 19th.

"Capital is fluid and one jurisdiction's loss can be another's gain because mining investors will flock to jurisdictions that have attractive policies … Sound regulatory regimes are an absolute must for policymakers who want to attract increasingly precious commodity investments," Green said.

The least attractive jurisdiction was Guatemala, which came last on the list, replacing Argentina's Jujuy province. Tahoe Resources (CN:THO) had a torrid time of it at its Escobal silve mine in Guatemala last year, which led to the mine's suspension.

Only slightly better in the bottom ten were (in ascending order) Kenya, Mendoza and Chubut in Argentina, Mozambique, Bolivia, Venezuela, Romania, China and Nicaragua.

Looking at the contributing PPI, or the institutes' report card on government's mining policies, the Republic of Ireland remained top for the fifth straight year, followed by Finland, (up from fourth in 2016) and Saskachewan, Sweden, Nevada, Northern Ireland, Michigan, Wyoming, Quebec and Newfoundland and Labrador.

The countries with the worst PPI scores were Venezuela, Chubut, Zimbabwe, Guatemala and the Democratic Republic of Congo.