National mining and forestry groups in Canada are calling on the federal government to intervene and halt ongoing strike action by longshore workers at the port of Montreal, saying the continued inaction on both sides of the issue was damaging the country’s reputation as a stable investment destination. 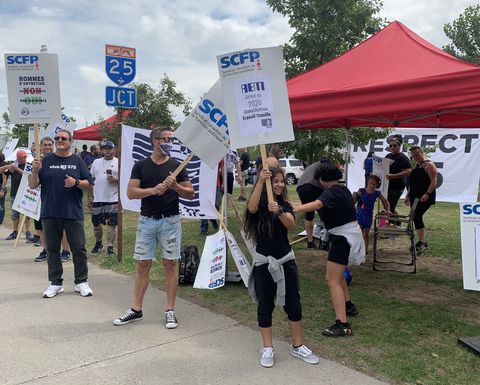 CUPE Local 375 on strike in Montreal

President and CEO of the Mining Association of Canada (MAC), Pierre Gratton said the worker inaction stacked on top of other national supply chain disruptions brought about by COVID-19, Indigenous rights demonstrations, and railway strikes late last year lowered the country's competitiveness on the international stage.

"On the backdrop of massive supply chain disruption, and unprecedented reputational damage to Canada as a reliable international trading partner, this strike and the lack of effective action to resolve it demonstrates an incomprehensible inability to prioritise Canada's economic recovery in one of our country's greatest times of need," said Gratton.

"If the government wants to attract advanced manufacturing investment for battery and electric vehicle manufacturing needed to support the transition to a lower carbon economy, a reliable and efficient logistics supply chain is essential."

Mining is a top customer at the port, moving large volumes of iron ore, nickel, gypsum and recycled metal to smelters and refineries in the region.

The Liberal federal government last week declined to take action, with labour minister Filomena Tassi expressing faith in the bargaining system, saying "we know the best deals are made at the table".

According to the local union, the Canadian Union of Public Employees (CUPE) Local 375, the port was closed because the Montreal Port Authority unilaterally changed the salary conditions of members on August 5 and because several ships had been diverted to other ports, including Halifax, New York and St John, which took work away from members and made normal operations impossible.

CUPE union representative Michel Murray said negotiations were ongoing. "The MEA [Maritime Employers Association], the shipping companies and shipping lines are the only entities responsible for closing the port and keeping it closed. The union will continue negotiations before a mediator and will keep the channel of communications open between the parties to achieve a possible truce," said Murray.

The collective agreement between the union and the MEA expired on December 31, 2018. Talks broke down mainly over scheduling, particularly regarding workers' work-life balance.

"We estimate that this disruption has already imposed nearly US$1 million in additional costs and lost sales for our sector in Ontario and Quebec - and this is at a time when we are facing high lumber demand and a struggling pulp and paper sector because of COVID-19."

The Montreal Port Authority has expressed concern about serious impacts of dockworker strikes.

"A prolonged stoppage in port operations has major repercussions for Canadian businesses that depend on international trade and, ultimately, for the supply of goods and services to the public," it said in a statement.

The port generates about C$2.6 billion a year for the local economy.