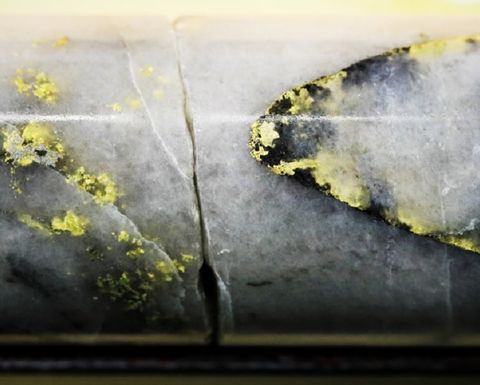 Visible gold from the Hinge zone

It encountered visible gold in a hole drilled to test Great Bear's 3D vein model, which predicted veining would be present within 15m of the intercept, that returned 0.7m at 1,602.73g/t - or 51.29 ounces per tonne.

Great Bear said the vein zone was part of the larger Hinge/South Limb vein system, which had been intersected in 28 holes across 300m of strike length and was open along strike and at depth.

President and CEO Chris Taylor said the zone was immediately south of an east-west trending D2 fold hinge and pointed out the Red Lake gold mine was also proximal to a regional D2 fold.

Great Bear shares spent much of last year around C50c before soaring to a seven-year high of $3.50 in October on the back of high-grade discoveries and backing from mining identity Rob McEwen.