White Gold turns heads as exploration steps up a gear

Slowly but surely TSXV-listed White Gold Corp is coming into its own. About half way into its 2019 drilling programme it looks as if the debt-free Canadian company backed by Kinross Gold (19% equity stake) and Agnico Eagle (19%) could make this a transformative year. 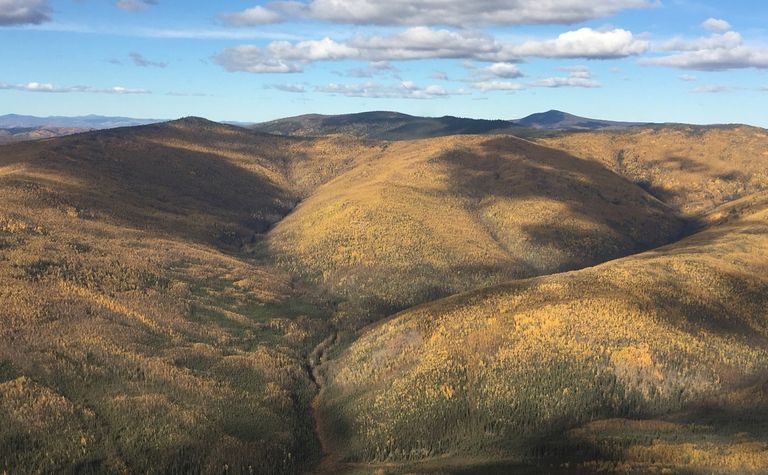 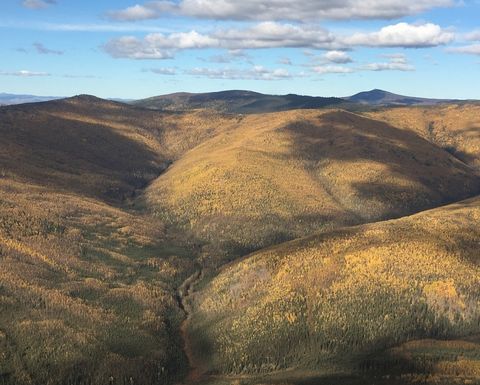 New discoveries have rolled thick and fast both this year and last, paving the way, hopefully, for another significant uptick in White Gold's resource tally.

In a recent company presentation, the company pointed to the strong take-out valuations on a per-ounce basis in the district with Kaminak going for roughly $175/oz when snapped up by Goldcorp in 2016.

The company's substantive land package is in Yukon's prolific White Gold District, the scene of the original Klondike Gold Rush. Today the company owns more than 40% of the claims in the region where both Newmont Goldcorp's Coffee deposit and Western Copper & Gold's Casino deposit are located.

Currently, the company, is undertaking 17,000m of diamond drilling and 7,500m of reverse circulation (RC) drilling across a wide area.

Initial results were promising. At its flagship Golden Saddle deposit (White Gold property), the results "were among the best to date", and at Vertigo (JP Ross property) at least six high grade mineralized structures have been discovered.

In a nutshell, the latest discoveries at Golden Saddle, 95km south of Dawson City, could significantly expand the high-grade mineralization within and beyond the current Golden Saddle resource boundary. Additionally, diamond drilling locally has extended Golden Saddle's nearby GS Main zone 205m down dip from historic drilling, about doubling the down dip extension in the area.

All of Vertigo's diamond drill holes intersected gold mineralization and the team has identified at least six high-grade mineralized gold structures. The company plans to drill 10,000m at Vertigo this season, one of its most notable discoveries during 2018. Drill intercepts in 2018 of up to 103.9g/t, and grab samples up to 304.3g/t were among the highest grades ever encountered in the White Gold district. 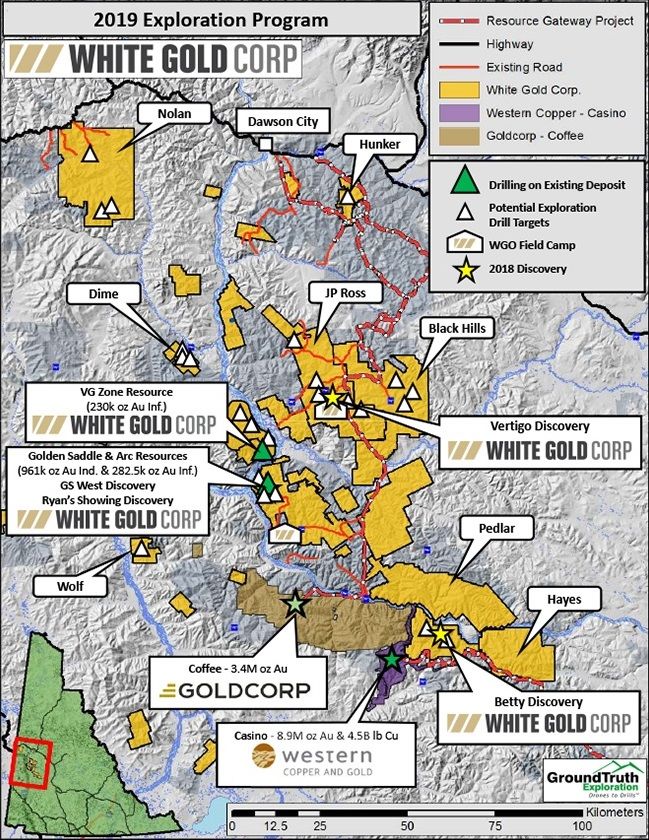 CEO David D'Onofrio said in an industry where even a single gold discovery would be notable, White Gold's record displayed "the power of our proprietary exploration strategy and methodology".

He said: "Unlike a typical junior mining company, there is no incentive for us to prolong work on a property where we don't see the potential. We are systematically performing low-cost exploration work across our entire portfolio to guide where further exploration dollars are spent."

Progress should be seen in the context of a large regional exploration program that continued to generate "a strong pipeline of new targets demonstrating the district-scale opportunity across WGO's assets".

At JP Ross, the team was following prospective gold targets near the Henderson Creek system, where placer gold mining has been taking place since the turn of the century.

Work at GS West and another gold target, Ryan's Surprise, had demonstrated the existence of myriad satellite deposits surrounding Golden Saddle on trend. By testing similar targets, D'Onofrio hoped to show how the company's properties would be turned into  "a true gold camp".

Another priority is to add more ounces to the 230,000oz at the VG Zone on the QV property acquired from Comstock Metals in early 2019. Here the resource is inferred at a cut-off of 0.5g/t (4.4 million tonnes grading 1.65g/t).

The VG resource is based on just 17 drill holes — and sits 44km northwest of Goldcorp's Coffee project, which is being developed as an open pit and heap-leach gold mine, slated for production in 2021.

Significant similarities have been detected in structural setting and mineralization style between VG and Golden Saddle deposits.

D'Onofrio said: "This property has seen very limited exploration to date and we are confident that our team, including Jodie Gibson who originally oversaw the discovery drilling, is well positioned to maximize the value of the VG deposit and the other highly prospective targets on the property. The similarities of the deposit and targets on this property to Golden Saddle and Vertigo provide a unique opportunity to leverage our team's experience in the White Gold District."

Elsewhere, the Betty property was contiguous and hosted in the same regional structure as the Coffee project.

Brokers reckon this year's drilling programme could yield significantly more than the 25% uptick in White Gold's resource estimate that flowed from the 2018 drilling season. 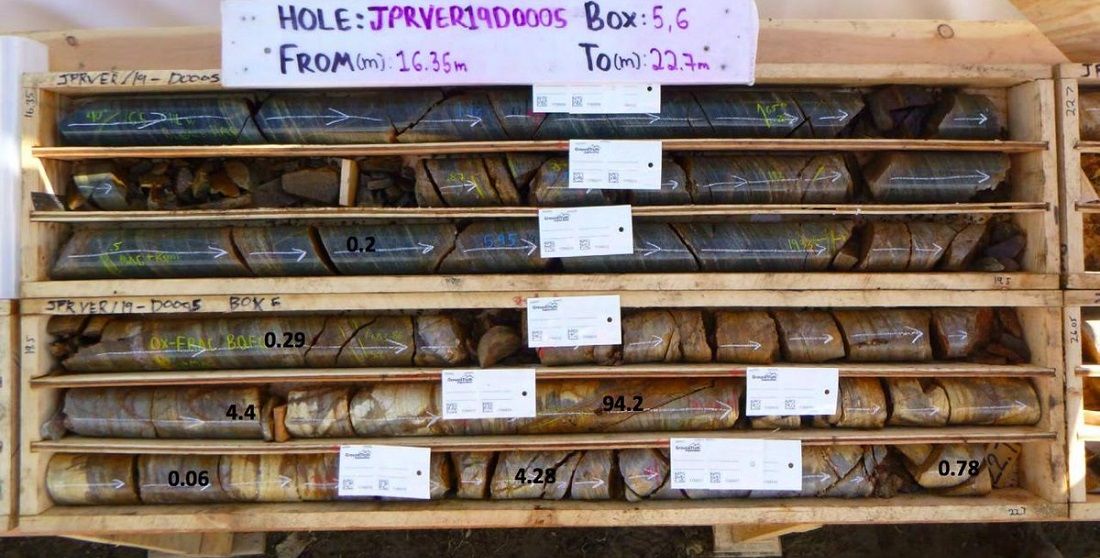 White Gold is undertaking 17,000m of diamond drilling and 7,500m of reverse circulation (RC) drilling across a wide area

Analysts certainly have White Gold on their radar. GMP Securities have the stock on its buy list with a price target of $2.20, while Canaccord Genuity, Clarus Securities and PI Financial have it on their watchlists.

There are other reasons why White Gold catches the eye.

For a start, legendary Yukon prospector Shawn Ryan is chief technical adviser. Years ago he staked and acquired a huge package of prospective Yukon properties, optioning them to different junior mining companies. However, after millions of dollars of exploration work, in a soft gold market, the claims lapsed and all reverted back to Ryan, who then spent years reviewing the data, picked the best projects, partnered with PowerOne Capital in Toronto, and created White Gold Corp; this time with a systematic exploration strategy and a regional approach to exploration in the district.

Elsewhere, Rob Carpenter, formerly CEO of Kaminak Gold before it was sold to Goldcorp for US$520 million three years ago, is on the board. He has 25 years of experience as a mining company executive and professional geologist, with a PhD from Western University. He founded Kaminak, the company that discovered the Coffee deposit sold to Goldcorp, leading as president and CEO for seven years, seeing the company listed on the TSXV.

A look at the background of that deal helps to explain White Gold's appeal.

Kaminak had been operating in the White Gold district since 2009 and produced a delicious feasibility study on Coffee that indicated the mine could be paid for in about two years with 3.4Moz. No wonder Goldcorp pounced, lifting the lid on what the district had to offer, and illustrating to investors the rich land package that White Gold is sitting on as it extends its exploration as well as increasing proven or probable reserves.

White Gold says it has more than 25 other early stage projects sitting in its pipeline.

Exciting times ahead for the company. 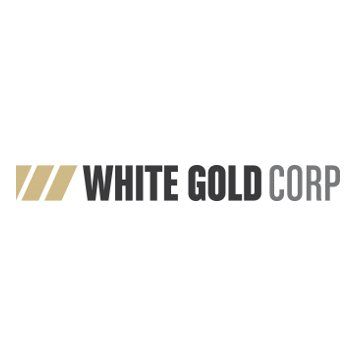 N.America precious M&A "on the back burner for now"