Defining a tier-one gold mine in what is clearly one of the world’s top-tier mining jurisdictions is now the goal of De Grey Mining as it moves forward rapidly at what has been described as one of the most exciting gold discoveries in Australia in decades, on the back of a A$100 million equity raising supported by leading institutional investors. 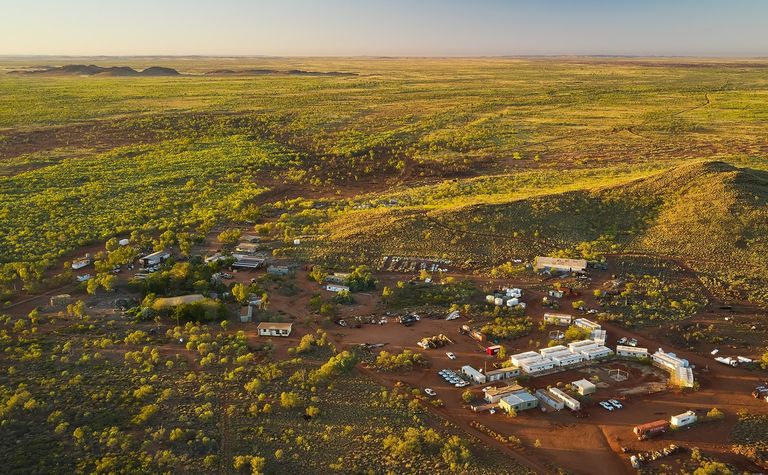 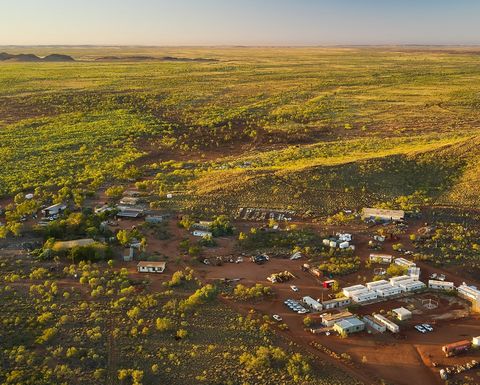 Camp Hemi in Western Australia's west Pilbara: Could be the start of something really big

De Grey, propelled to a A$1.6 billion market capitalisation and into the ASX Top-300 companies by the extraordinary drilling results from Hemi in Western Australia's west Pilbara region in 2020, will spend more than $80 million in the current financial year (FY21 to June 30 next year) defining a maiden JORC resource at a discovery site drilled for the first time last November, and expanding its knowledge of other intrusion and shear-hosted gold deposits in its 1,200sq.km landholding in the Mallina Archaean sedimentary basin.

The company has 2.2Moz of defined JORC resources on shear-hosted deposits in the basin. More than 150,000m of drilling in the past year on the altered brecciated-type intrusion mineralisation found at Hemi has given De Grey the confidence to set a goal of outlining a plus-5Moz JORC resource at the greenfield discovery by the end of June, 2021.

"What we're trying to do in the next 12 months is to put out a world-class resource at Hemi, demonstrate a tier-one production potential, and then beyond that - during this 12-month period - also show that there is potential for Hemi to get bigger and maybe see repeats along that 150km line of structure [within De Grey's Mallina ground]," says managing director Glenn Jardine.

"We are establishing a separate exploration team to focus on that tenement-wide potential, initially at known intrusion targets such as Scooby, Antwerp, Shaggy and Alectroenas, which hasn't previously been drilled, and then other prospective areas.

"We are looking, separately again, at extensions of the known shear-hosted resources, and then other prospective shear-related targets.

"So there is a three-pronged attack, and we will spend 90% of those funds raised [latest $100 million share placement] in the ground."

Described this month at a conference in Perth by the co-founder of placement lead manager Argonaut Securities, Eddie Rigg, as "the greatest [potential opencut] gold discovery in Australia in my time … I don't think we've seen anything like it", Hemi has demonstrated with the intersected widths, grades and consistency of mineralisation drilled in a 2km-by-2.5km area so far its potential to underpin the sort of 300,000ozpa, 10-year-plus type of project typically meant by "tier one" references in the Australian gold space, according to Argonaut research.

Jardine won't buy into any talk now beyond the "aspirational goal of tier one scale" De Grey has for Hemi, though he notes the world-class infrastructure to support a large-scale project in and around Port Hedland in WA, a region that is home to the world's largest iron ore export hub.

He's certainly not about to start selling short the potential De Grey sees as Hemi and Mallina.

"It's still very early days from my perspective," he says. Jardine, an experienced industry executive and project manager, joined De Grey in March this year.

"The guys had sniffs in December, got it confirmed with RC drilling in February, and it's September now, so it's not very long to have been on the ground out there.

"It's basically a fresh discovery - completely greenfields - and the understanding of what we have there is improving all the time, as shown by the [latest announced] discovery at Falcon."

Adjacent to the major Aquila, Brolga and Crow discoveries, Falcon is the focus of intense current drilling to define and extend an intrusive gold system at least 2.4km long where De Grey has hit 92m of 1.3gpt from 167m depth, 66m of 1.1gpt from 114m, and 51m of 1.5gpt from 205m, and an initial diamond core tail extended mineralisation down to 250m with a true width of about 70m.

"The interesting thing from my perspective - as someone who hasn't been at the company long - is that it's [Falcon] only 600m from Brolga, which is where the guys have been focused only since December, along with Crow. So, initially we thought we were stepping out from Aquila and then found it was a separate system. But only 600m from Brolga and, bang, there is something that's 2.4km long and maybe 80m wide. 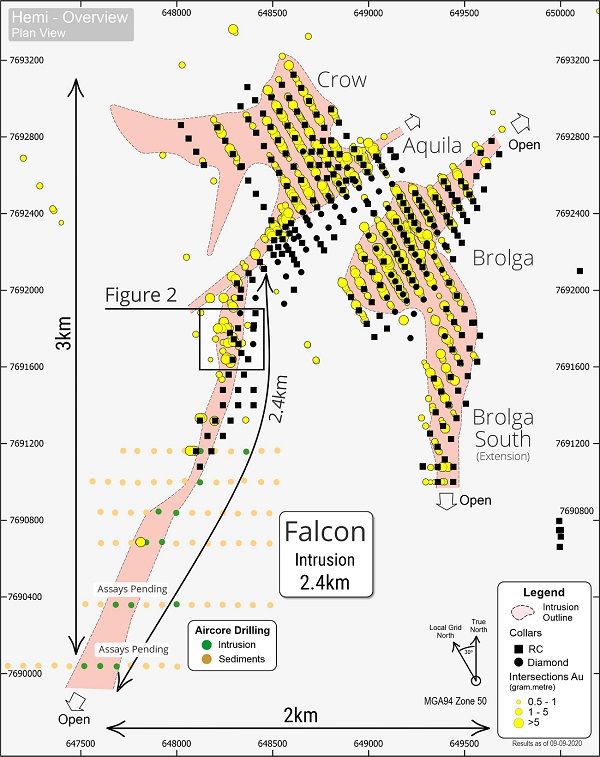 "It's astonishing that you would find something like that just sitting there.

"It's changed our appreciation of what else is out there just within the Hemi footprint, let alone the greater Hemi area, if you can find something like that just next door to what was already a major discovery."

De Grey technical director Andy Beckwith, who has led the company's exploration at Mallina for the past five years, says the scale of Falcon looks impressive, even next to the long, wide Brolga (including Brolga South), Crow and Aquila systems at Hemi (short for hemiphaga, for birdwatchers).

"Realistically it's bigger than Brolga, potentially, and if that's all mineralised - so far the drilling has been pretty positive and we're still putting RC holes systematically down the strike of that and we've got mineralisation over at least 800m based on the aircore - it just presents a tremendous chance to add ounces quickly.

"Because with the continuity of the mineralisation we're not talking about hundreds of thousands of metres of drilling there, we're talking about more like 20,000m to pretty much establish a new resource.

"We had stepped out along Aquila with wide-spaced drilling - 320m-spaced aircore lines - and hit what we thought was an Aquila extension in one of the holes. So we infilled to 160m and couldn't find it, but then did some 80m-type drilling and realised we could get it [the mineralisation] in tight. Then we changed the orientation of the drilling and we've been able to systematically get it all the way down. We've just kept stepping out along strike and it has been relatively easy to chase it. But a distinctly different [Greater Hemi] footprint is starting to emerge.

"So that might be something we do in other areas - reorientate the drilling where we've hit one or two intersections to more quickly determine what we might have."

Overall, though, the geological nature of the Hemi deposits and structural settings has not constrained the efficiency of De Grey's exploration or resource drilling.

Beckwith says about 150,000m of aircore, RC and diamond drilling has been completed since the start of the year. The company has six rigs currently active and feels that will be adequate to step up the rate of attack from here. The year-round drilling access, lack of topographical and infrastructure barriers, and availability of people and rigs have all contributed to De Grey's rapid success. But so has the geology.

"The beauty of it [large-scale, intrusion-style mineralisation] is the consistency and continuity of grade, which is allowing us to do a pretty efficient program," Beckwith says.

"Our discovery drill spacing has been 80m-by-80m. In some instances you might be able to get inferred [resources] from that; let's say inferred is 80m-by-40m. That's still pretty good spacing that makes for highly efficient drilling. We're getting reasonably good metres a day from all of our rigs, which keeps the timeframe down, but that spacing is the fundamental difference. To infill to get to indicated resources we are talking about tens of thousands of metres, not hundreds of thousands."

De Grey will aim to post a circa-70% indicated resource next year.

Jardine says the switch into a big Falcon resource drilling program underscored the nimbleness of De Grey's exploration focus, but the company would now intensify drilling on the enlarged Hemi footprint and also undertake further metallurgical and environmental "de-risking" work in support of project studies that would turn into detailed economic and development assessment from the second half of next year.

"The majority of that is on metallurgical testwork as well as resource updates that we've spoken about, undertaking very early mining studies such as pit shell optimisations, and then also looking at the sort of footprints we will need for infrastructure down the track, and just undertaking early-stage environmental studies on those footprints," he says.

De Grey is building organisational capacity and will spend money on site facilities to make sure the excitement around involvement in one of Australia's best new gold projects isn't the only thing drawing people to work at Hemi and for De Grey.

"We've increased our capability at the management team level, and also refined internal processes under new personnel to prepare the company to meet upcoming requirements, and we've got a plan mapped out to recruit other people that we're going to need on that journey," Jardine says.

He says it's important for new and long-term investors in De Grey to have absolute confidence in the "strong resource base" being established, and its capacity to support the company's ambitious goals for Hemi. 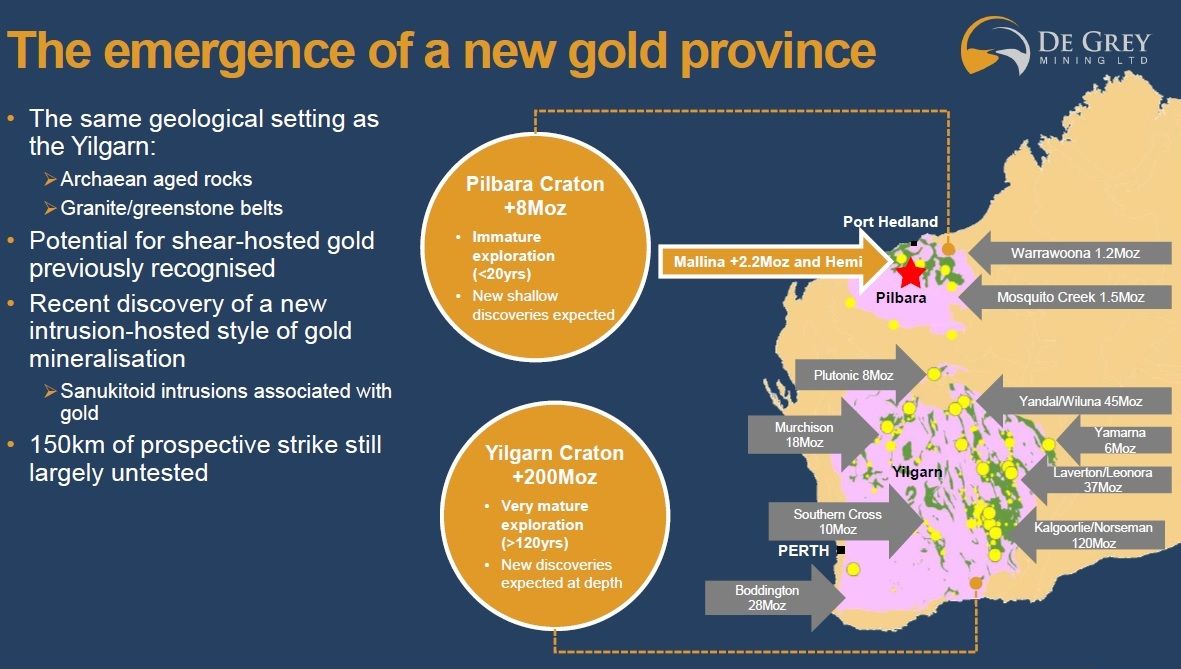