ASX-listed Jindalee Resources kept a fairly low-profile as a multi-commodity project generator over a number of years but it’s been hard to stay out of the spotlight of late with a share price that has climbed fourfold since the start of 2021. The market’s interest in Jindalee and its major McDermitt lithium project in the US is only going to intensify over the next six months. 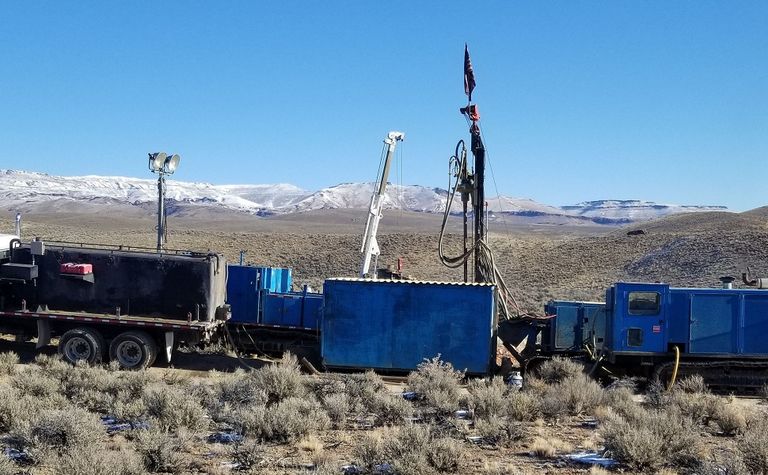 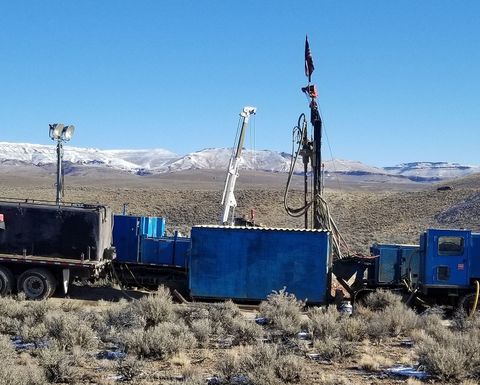 Drilling at the McDermitt lithium project, near the Oregon-Nevada border, in western USA

Jindalee went to North America three years ago to assess early-stage, sedimentary-type lithium prospects as a potential point of entry into what has become a turbocharged race to build a domestic pipeline of ‘strategic' minerals and metals sources to meet increasing demands of electric vehicle fleet and infrastructure development in the US and Canada.

It managed to hit the jackpot.

Of a handful of properties examined closely, two stood out and one is now recognised as the country's largest undeveloped lithium deposit.

Jindalee has posted an updated indicated and inferred resource of 1.43 billion tonnes at 1,320ppm lithium at a 1,000ppm Li cut-off grade - 10.1Mt of lithium carbon-equivalent - after 2020 drilling at McDermitt in south-east Oregon, and came out with an updated exploration target of up to 2.3Bt at 1,100-1,500ppm Li using the same cut-off grade.

Permitting is on track to enable Jindalee to start its biggest drilling program yet in August this year, with infill and extensional drilling planned to define the full extent of the major deposit..

Meanwhile, advanced metallurgical testwork and the drilling to date will inform a scoping study set to be delivered at the end of June.

In a short time - and working almost by remote control from Australia during COVID-19 restrictions - Jindalee has shown Oregon is an attractive place to explore for lithium and that the deposit mineralogy at McDermitt supports its belief that sediment-hosted lithium deposits can be big, long-life and, critically, low-cost sources of the valuable battery-making material.

"When the ground was first picked up in Oregon people said we wouldn't be able to drill any holes there, and we have. We're permitting drilling," Jindalee CEO Karen Wellman says.

"We're on track for June 30 with our scoping study. We have various consultants working on components of that at the moment and a big part of it is the metallurgical side of things and the processing flowsheet. We knew that would require focus and so we've already expended a lot of energy in that area and made excellent progress. We've also benefited from being able to be a fast-follower there, too, rather than take on the mantle of first-mover." 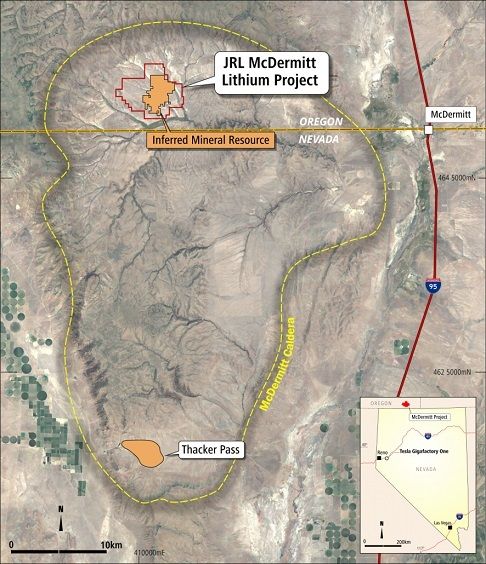 Lithium Americas' proposed US$1 billion Thacker Pass lithium project on the other (southern) side of the Oregon-Nevada border, and other end of the McDermitt Caldera, was the subject of a August, 2018, pre-feasibility study that highlighted the potential for low-opex, rapid production of battery-grade lithium carbonate from sediment/clay hosted lithium, using fairly simple processing methods, and a definitive study is overdue.

Now, after receiving a Record of Decision from the US Bureau of Land Management earlier this year, Lithium Americas says it is evaluating "partnership and financing" options for Thacker Pass. The company is also building a large-scale lithium brine project in Argentina in partnership with its major shareholder Ganfeng. It says remaining state permits and water right transfers allowing a construction start at Thacker Pass could be received before the end of 2021.

Collaborating with experts in both the US and Australia, Jindalee was able to quickly focus on optimising delivery of McDermitt's clay fraction - containing an estimated 80% of the deposit's lithium - to an acid leach circuit with both sulphuric acid and hydrochloric acid able to produce circa-98% recoveries with very short leach times.

Attrition scrubbing has also been looked at as a means of presenting less, higher-grade material for HCI treatment, opening a door to lower-volume leaching with much reduced acid consumption, and streamlined capex and opex.

"We've demonstrated we can increase the lithium grade of the ore by 60% with a mass reduction of about 45%, which is why it becomes a lot more cost-effective for mining," Wellman says.

"Our focus is on keeping opex down, and beneficiation gives us that.

"We have lots of sample material, so our metallurgical testing is ongoing and the focus has shifted to the full processing cycle so we can produce lithium carbonate samples and start talking to potential offtake partners.

"There currently isn't a sediment-hosted deposit out there being mined and processed, so essentially this is a new process, albeit the components are not new: we're reversing a mineral sands process, attrition scrubbing, by keeping the slime portion and ditching the coarse grain, and optimising the leach component.

"There are sediment-hosted deposits where the lithium is locked up inside the hectorite, but we seem to have the lithium sitting on the outside of the hectorite particles, which is why we can liberate it really quite quickly and easily. That's a very fine detail but the difference is key.

"The advantage is there is a very short turnaround from mining production to end product. You can go from taking ore out of the ground, to producing lithium carbonate, in around 24 hours, so it's not like the spodumene producers where you're sending your concentrate offshore, or brine producers where you are waiting for it to evaporate before processing."

Blue Ocean Equities analyst Steuart McIntyre says further results from McDermitt met-work are among key drivers in a "catalyst-rich" upcoming period for Jindalee, which could be "in line for material re-rating over coming months". 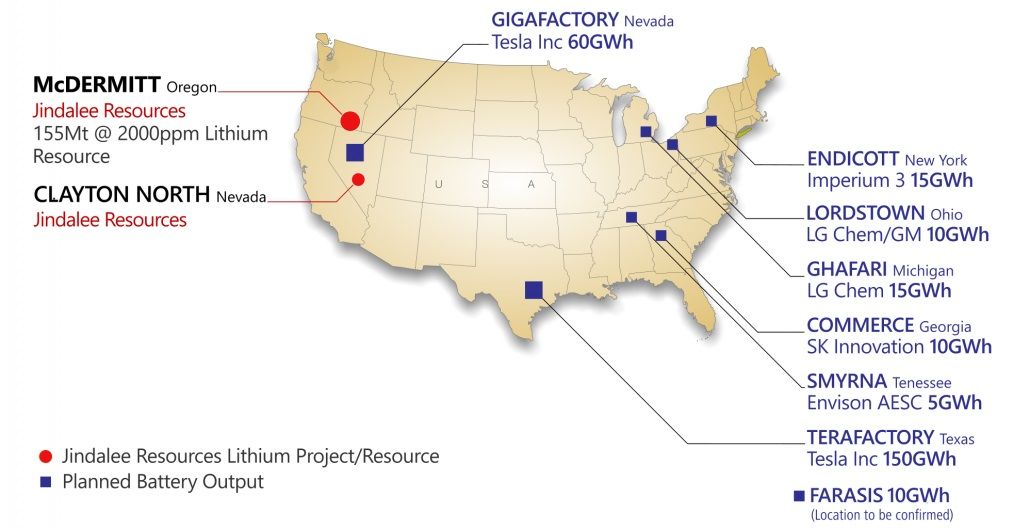 President Joe Biden's planned US$2 trillion spend on EV infrastructure and other carbon reduction projects has elevated the country's strategic focus on domestic battery mineral sources. The US currently produces only about 1.2% of the world's lithium.

Electric car maker Tesla's localisation of cathode production in the US further underlines the strategic value of projects such as McDermitt.

McIntyre says Lithium Americas had a US$2.6 billion NPV on Thacker Pass in its 2018 PFS.

Early assessment of available data suggests project metrics for McDermitt and Thacker Pass might be "very similar … [given the McDermitt] caldera proximity and geological similarities".

Even doubling possible opex at McDermitt in a comparison with the higher-grade Thacker Pass left the former with better than 50% current operating margins at current lithium carbonate prices, McIntyre says.

"Clearly, until we see Jindalee's [comparable] study, this should be seen very much as what-if scenario, if our assumptions … prove to be correct," he says.

Jindalee's operating history suggests it will hand over development of McDermitt to another party, possibly a joint venture partner, at some stage.

But before then, Wellman says, its focus will very much be on continuing to de-risk the heavyweight project and maximise its value.

Jindalee backed for US lithium work

Alligator a step ahead with key uranium partnership