Western Australia-focused Kingwest Resources has found firm support, after confirming a Kanowna Belle-style discovery at its Goongarrie project and moving to become a gold producer at Menzies within a year.

The company has just raised A$4 million in a strongly supported placement, which CEO Ed Turner puts down to excitement around its gold discovery under Lake Goongarrie, dubbed Sir Laurence.

Turner, who was previously the head of Galena Mining where he delineated the high-grade Abra lead-zinc deposit now under development in northern WA, believes Kingwest's recent blind discovery has multimillion-ounce potential.

Kanowna Belle, 18km from Kalgoorlie and now one of gold major Northern Star Resources' assets, began mining in 1993 and still contains about 2.5 million ounces of gold.

Kingwest was targeting the Kanowna Belle-style litho-structural setting under the saltlake at its greenfields Goongarrie project, acquired less than two years ago, and started drilling once a customised track-mounted rig became available.

Twelve holes across a 500m drill line returned gold results in September in excess of 1m at 1g/t gold, with highlights including 3m at 6.5g/t and 3m at 4.1g/t.

"This is classic West Australian Goldfields geology, demonstrating very similar traits to how the discoveries of the likes of nearby Paddington and Kanowna were made and exploited," Peloton Capital analyst Ian Spence said this month.

Turner said he was very happy with the results, which validated Kingwest's exploration model.

"Before we even drilled the hole, we had planned it because of the host rock, which is a  polymictic conglomerate, but also the intense D4 structures which come through there, which are associated with mineralisation particularly in this part of the Goldfields, including Kanowna Belle," he said.

The drilling demonstrated 70-80m of alluvial cover, with only the final 10m or so intersecting bedrock before blade refusal.

Kingwest has already launched into a follow-up programme and has just restarted aircore drilling at Lake Goongarrie, with a 6,000m campaign underway around Sir Laurence testing targets along strike. 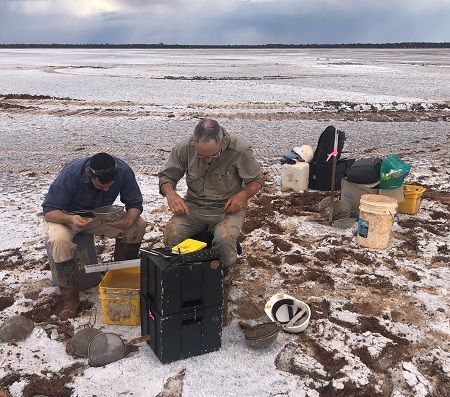 The programme will also include 1,000m of diamond drilling next month to test the discovery at depth and determine the three-dimensional controls of the primary mineralisation, Turner said.

"It's very important we do that, before we launch into more extensive RC resource definition drilling," he said.

The RC drilling is slated for early 2022.

"All available personnel on site."

Kingwest struck a transformational agreement in early October with established Goldfields mining and milling company FMR Investments, which could see underground mining resume at Yunndaga for the first time in about 85 years. 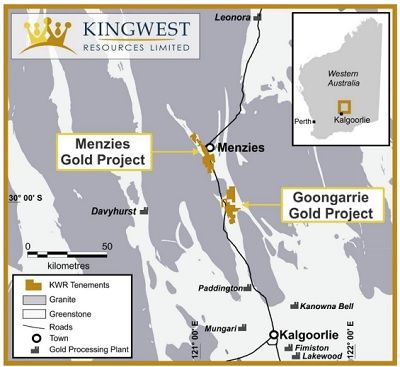 Under the Yunndaga deal, subject to due diligence, FMR will cover all capital costs and be responsible for mining, haulage and processing at its Greenfields Mill in Coolgardie.

The deal is expected to deliver short and medium-term cash flow to Kingwest, with the company also to receive a $1 million payment before mining begins, Turner pointed out.

"We're very happy to get that deal done," he said.

"[FMR] also have their own processing facility which is often the biggest challenge in this part of the world, getting access to a mill.

"So they come in, pay $1 million up front in two separate payments before they start mining.

"They put up all the capital into production and after they've got the capital back we then do a profit share arrangement … and it's limited to a five-year period, or 180,000z, whatever comes first."

Yunndaga is just one of the numerous deposits at Menzies and one more amenable to underground mining.

It's also the largest deposit at the project.

Kingwest announced an initial underground resource for Yunndaga in September, which was a 384% boost to the previous estimate, taking it to an indicated 57,000oz at 4.6g/t using a 3g/t cut-off and fresh rock only.

A positive scoping study in March, based on Menzies' earlier 446,200oz resource, estimated initial capital costs of just $2 million for a 31-month, eight-pit toll treating operation generating about $80 million in profit in less than three years.

All the deposits sit on granted mining leases and metallurgical test work has indicated recoveries of up to 99%.

Kingwest is now investigating options to monetise these existing deposits. 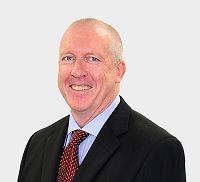 "We're looking at similar [joint venture] type deals basically and we're in discussions with parties about doing that," Turner explained.

"As a small company, we don't want to use our own cash or issue too many shares, or borrow too much money to get into production.

"So, if we have another party, who has the capital and also has the expertise … we're investigating other opportunities like that.

"And that will ultimately give us access to deeper underground mining and those other deposits.

"So we'll continue to try and grow those deeper resources, with a view to mining them ourselves in the future."