McEwen Mining is planning to undertake an initial public offering of McEwen Copper and the Los Azules copper project, in San Juan, Argentina, later this year after completing an updated preliminary economic assessment (PEA), additional resource drilling and the construction of a road to provide year round access.

Los Azules porphyry copper-gold deposit is one of the world's largest undeveloped copper projects not owned by a major mining company.

Investors are warming to Argentina as an investment destination on the back of several significant transactions in the lithium space, as well as in the copper space.

The country is showing the ability to provide metals for the energy transition, and San Juan province has the potential to become a hub for copper development through the advancement of projects such as Los Azules.

"There is a long history of mining in San Juan. Majors active in the province include Barrick Gold, Shandong Gold, Glencore, Fortescue Metals and the Lundin Mining group of companies," said McEwen Mining chair and chief owner Rob McEwen.

"And we are aware that Anglo American and Vale have been looking at development opportunities in the province.

"Factors driving this interest are: one, the abrupt political shift to the left in Chile and Peru; two, the undeveloped geological potential of Argentina; three, the improved prices of metals; and four, the large foreign investments being made to develop Argentina's Lithium resources.

"All of these factors are giving greater comfort to foreign investors and the government is laying-out the welcome mat."

Los Azules has been something of an orphan in McEwen Mining's portfolio of predominantly gold projects, particularly through the bear market years where advancing it towards development seemed like a pipe dream. But with the copper price rising from a low of about US$2 per pound two years ago, to over $4 per pound today, and a supply deficit forecast, a deposit like Los Azules has become a very attractive asset and one that merits the investment to advance towards a production decision.

Exploring and developing a porphyry copper deposit is an expensive business, which is why McEwen Mining is putting the asset into a new vehicle, McEwen Copper.

McEwen Copper will also hold the Elder Creek exploration property in Nevada, US. The new company will thus be able to raise the funding it needs without stressing the balance sheet of the parent company or detracting from its ability to invest in its gold development projects around Gold Bar in Nevada, US, or the Fox complex near Timmins in Ontario, Canada.

Rob McEwen had already invested US$165 million in McEwen Mining when he poured in another US$40 million of his own money to launch McEwen Copper in 2021. He aims to close on another $20 million-$30 million in the near future to provide its initial funds. The minimum investment is a quarter of a million dollars.

"The rationale for creating McEwen Copper is all about surfacing value for McEwen Mining and having a copper specific company that can raise funds to advance the development of Los Azules," McEwen said.

"Investors appear to have a preference for pure plays, such as a copper company or a precious metal company, but not a combination of the two. Especially when it's a small precious metal producer with a big copper project to fund, such as McEwen Mining." 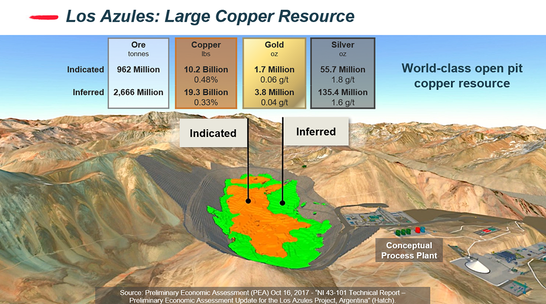 Companies with large copper porphyry deposits tends to be valued at cents on the pounds of copper in the ground, which may not sound much, but given the billions of pounds of resource, those cents can quickly add up to some impressive figures.

With its initial funding round, management estimates the company has a valuation of around 0.6c/lb, and with the derisking work to advance the project, it has a path to considerably raising that within the next couple of years.

"We expect that by the time we have completed the PFS (pre-feasibility study), the value of Los Azules should have increased to somewhere north of 3-5c/lb, based on the past sales of large copper projects," McEwen said.

"Our current valuation of 0.6c/lb gives the project a value of $175 million; at 3c/ lb, it would have a value of just under $1 billion and at 5c/lb, a value of over $1.6 billion. This represents a large increase in value for shareholders of both McEwen Copper and McEwen Mining.

"We see a potential upside of 4-6 times within three years. Furthermore, when you look at the sales of 12 large copper properties between 2010 to 2018, there may be considerably more upside given that of the 12 sales, there were only two projects at a PFS stage and those sold for over 13c/lb and 15c/ lb.

"We have had several majors take a close look and express an interest in acquiring Los Azules. However, we believe it is much too early to sell, because the steps that we are taking should improve the project's value significantly and the outlook for copper is strong."

Since launching McEwen Copper, the company has been building its technical team and consultants to take the project forward - first, to complete an updated PEA and to construct a northern access route to provide year-round access. The updated PEA should be completed later this year in the fourth quarter. It will incorporate an optimised mine design. The next step after the PEA will be to advance to complete a PFS. 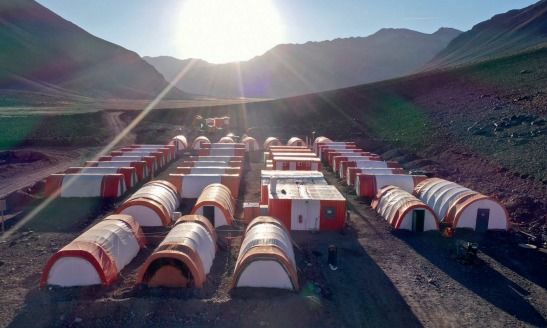 "While the Los Azules PEA projected a robust economics return at $3/lb copper. We brought in Whittle Consulting to look at optimising the mine plan. Their preliminary work suggests an even larger, more profitable mine may be possible at $3/lb. Under this scenario, there's a chance that Los Azules, when built, could become one of the 20-largest copper mines in the world," McEwen said.

"I want to emphasize that we are not planning to just have a large mine. We are committed and very excited to be designing a mine that will be the model for mines going forward when it comes to the usage of water, power, the emission of carbon and reduced impact on the environment."

The company currently has two drills on-site and is ramping up towards 10 drills by mid-February. McEwen plans to execute a 53,000m programme.

"About 44,000m of that will be for upgrading the inferred resources to an indicated resource and about 9,000m for technical drilling, including geotechnical and hydrology," chief operating officer Peter Mah said.

Our goal is to create a strong and profitable gold and silver producer focused in the Americas.

Our goal is to create a strong and profitable gold and silver producer focused in the Americas.