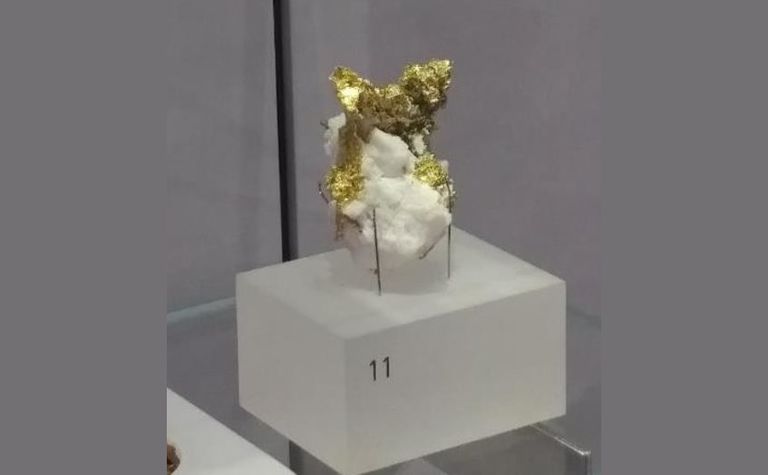 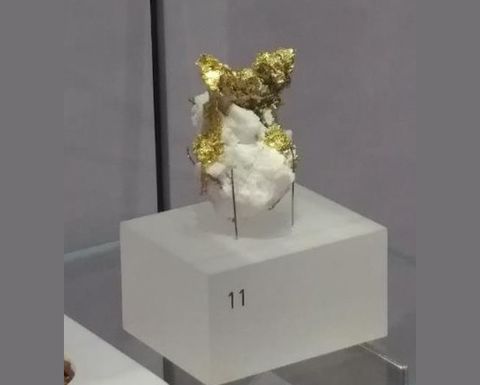 A specimen from the historically mined Laguna property, on display at the Royal Ontario Museum

Rockcliff's subsidiary Goldpath Resources has an option to earn a 100% working interest in the historically-mined property in Manitoba's Snow Lake and has optioned it to Kinross.

It said Kinross had spent its C$1.25 million two-year commitment in the first six months and would spend a further $1 million on exploration starting this month.

Kinross must spend $5.5 million (US$4.1 million) over six years at the Laguna and Lucky Jack properties to earn 70% in both, under a deal struck last year.

Rockcliff has had a transformational start to 2019, closing a "reorganisation transaction" with cornerstone backing from Greenstone Resources, which now has a 43.1% stake, and buying back a stake in a Hudbay Minerals copper project.

In a $13.3 million (US$9.9 million) deal, it acquired three Manitoba assets from Norvista Capital and affiliates, comprising the option to earn a minimum 51% of Hudbay's Talbot copper property, a leasehold interest in the Bucko Lake mill facility and 100% of the Tower copper project, about 40km from Talbot.

Rockcliff had originally signed the option to earn 51% of Talbot from Hudbay in 2014.

However it had assigned its interest to Norvista 12 months ago for C$3 million and an additional 0.5% NSR over Tower, which was slated for commercial production later this year.

Ken Lapierre, who remains president and CEO amid a board overhaul that also took place this month, said last week the company looked forward to "unlocking the full value of our high-grade Manitoba assets and transitioning Rockcliff into the next major base metal producer in the Flin Flon-Snow Lake greenstone belt."

The company had ditched plans for a different transformation about a year earlier.

Its shares last traded at 11.5c, capitalising it at $9 million.