The proponent of the contentious Pebble copper-gold-molybdenum-silver project in south-eastern Alaska, Northern Dynasty Minerals, has welcomed a change by the US Army Corps of Engineers (USACE) to the preferred access route for the mine, opting for an all-land route instead of the smaller-footprint connecting ferry service across Lake Iliama. 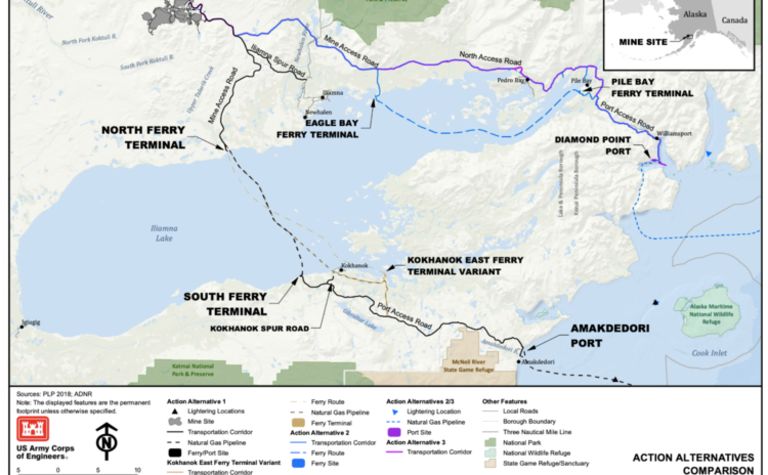 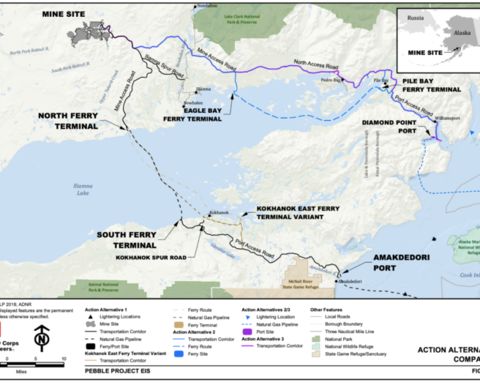 The US Army Corps of Engineers has selected an all-land access route for the controversial Pebble mine in south-east Alaska, USA

The USACE's Alaska office chief David Hobbie said late last week the Corps had opted for the "least environmentally damaging practicable alternative" for the massive low-grade mine, which entails an all-land route to a port site on Cook Inlet via about 140km of road north of Lake Iliamna, thereby avoiding the need for ferry transport across the lake.

The northern transportation corridor, otherwise known and fully evaluated in the Pebble environmental impacts statement as ‘Alternative 3', has been studied by company subsidiary Pebble Limited Partnership (PLP) and is said to present several benefits over the lake ferry options.

"From a cost perspective, the various transportation alternatives evaluated as part of the Pebble EIS over the past several years are similar," said Northern Dynasty CEO Ron Thiessen.

"We had thought the slightly smaller wetlands footprint associated with the lake ferry alternatives might make them preferable to the USACE and other regulatory agencies, but they clearly have judged an all land-based route to be superior from an environmental perspective.

"It's a decision we welcome and accept. There are clear operational benefits associated with a single mode transportation system versus multi-mode, and we're confident the northern corridor can be built and operated safely in partnership with local villages and landowners."

Thiessen said the PLP would work with each of the landowners along the northern corridor, and he believed it would secure the authorisations needed to build and operate the road.

US-based PLP CEO Tom Collier confirmed the USACE had contacted the company several weeks ago to request that it formally modified its project description to reflect the northern transportation corridor.

He said the driving force behind the USACE's route change was likely concerns about lake ferry operations expressed by cooperating agencies (including the US Environmental Protection Agency and US Fish & Wildlife Service) and members of the public.

Collier underlined the announcement meant the company was one step closer to receiving a final permitting decision for the project.

As usual, opponents were up in arms about the positive momentum for the project. The Bristol Bay Native Corporation (BBNC) labelled the permitting process as "fundamentally flawed".

The new route would cross BBNC surface and subsurface lands, including at its eastern terminus that sits on property jointly owned by subsidiaries of BBNC and Igiugig Village Council. Both entities had previously expressed to the USACE and PLP that these lands would not be available to accommodate Pebble.

"A major change this late in the process is yet another sign of PLP's willingness to take something modest and conservative into the permitting process to obtain the permits for what will ultimately become a much larger mine," the organisation said in response to the USACE announcement.

"It crosses lands that are not and will not be available for the purpose of building Pebble mine. And most importantly, it is a clear sign that PLP has no plans to stop at its current 20-year mine plan," said Cheyette.

He argued at the very least the change necessitated a supplemental EIS, "if not a complete revision to the current review".

The USACE had stated it did not plan to conduct any new environmental analysis or provide additional opportunity for public comment and input.

Trout Unlimited CEO Chris Wood said in a statement: "The continued, major changes demonstrate the basic problem with the Pebble mine proposal. Pebble's entire approach to developing this mine is held together by bubble gum, baling wire and duct tape. Alaska deserves better than that."

Another civil opponent of the project, Katmai Service Providers and owner of two Bristol Bay fishing lodges CEO Brian Kraft, said the PLP had presented "nothing but a fantasy mine" that could "only exist on paper and fancy powerpoints", and the Corps was merely "going along with it".

Determination expected in May