In our May 2016 article, ‘Miners gain modelling advantage’, we explored the benefits that dynamic simulation modelling offers miners. Here, we drill more deeply into one of those advantages: modelling’s ability to help mining companies craft continuous-improvement strategies. 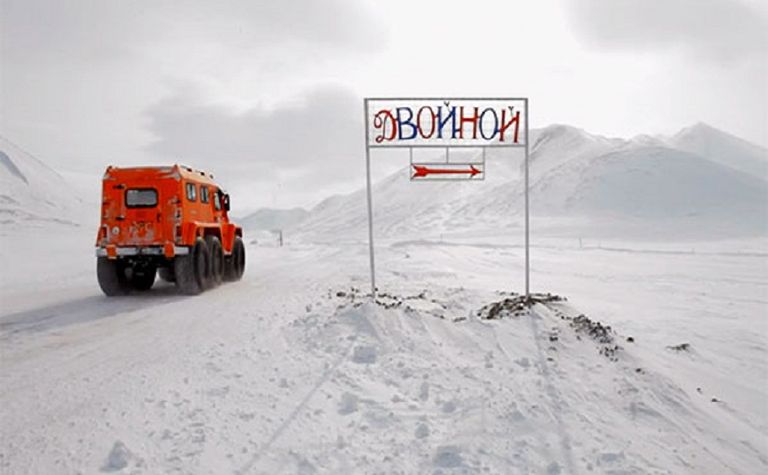 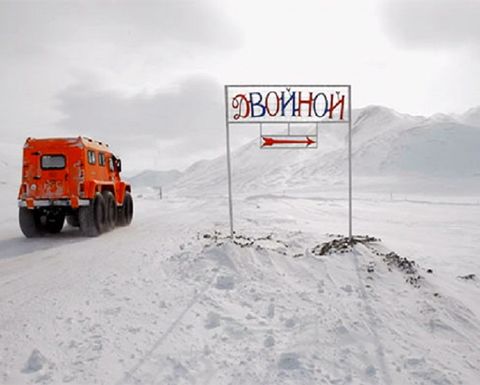 In particular, dynamic modelling enables miners to identify the likely benefits and knock-on effects of improvement initiatives. It also positions them to uncover risks hidden within initiatives under consideration. Informed by these insights, miners can more easily prioritise initiatives that will have the best impact on the performance metrics that matter most to them.

But how does such modelling work, in practical terms? To answer that question, let's look at an improvement effort launched by Kinross Gold, the Canada-based gold mining company. As part of a larger ‘Achieving Excellence' program, Kinross set out to determine whether its low-cost, high-grade Dvoinoye (DVO) site, located in the remote Chukotka region of Russia's Far East, was operating at maximum efficiency.

DVO had performed exceptionally well on metrics such as equipment utilisation, maintenance effectiveness, and production plan achievement. This was impressive—given the site's harsh conditions. Located almost 100km north of Kupol (Kinross's second site in Russia and its regional processing facility), DVO is extremely isolated. It can be accessed only by helicopter, by roads that are travelable just during wintertime, or by an all-season road that extends between DVO and Kupol. Using the all-season road, Kinross moves ore from DVO to Kupol and transports work crews and equipment between the two sites.

Indeed, getting essential goods, supplies, equipment, and materials into DVO and Kupol entails a complex combination of container shipping, trucking, and aerial delivery (see figure 1). The Northern Sea route is available only during summer. Moreover, in this mountainous region north of the Arctic Circle, winters are long and brutally cold, with average annual temperatures bottoming out at minus-13C. Summers are marked by persistent fog, rain, and frost. It's not uncommon for inbound deliveries to take as long as 15-18 months. 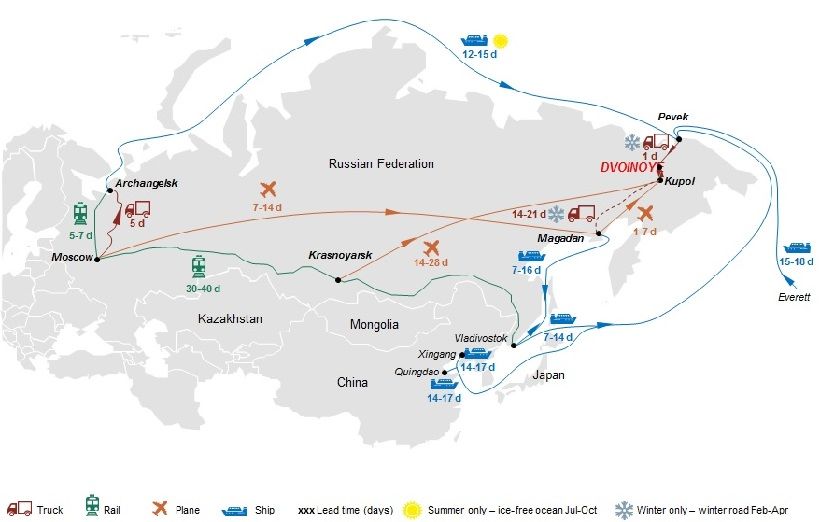 Despite DVO's strong performance, Kinross wanted to take a closer look at the site's efficiency. The project would aim to minimise production costs by optimising operations across all of the company's assets. With this goal in mind, Kinross assembled a cross-functional team comprising experts from its production, maintenance, procurement, and finance functions. The team's mission? To launch a comprehensive review of DVO's underground operations and identify the most promising improvement initiatives.

Team members followed a two-step approach. First, they identified the major bottlenecks in the underground operations using operational data and driver tree analysis, using insights from this analysis to focus the effort. Second, they developed a dynamic simulation model to identify the most promising improvement ideas and evaluate their likely impact on the overall operation.

The team began by running a bottleneck analysis. The analysis was based on motion studies and applied sophisticated algorithms to analyse detailed data gathered from DVO's operations and equipment used on the site. Such equipment included a variety of development drills, bolters, loaders, and underground haul trucks. A key focus was to identify bottlenecks in processes involved in underground mining operations—such as drilling, blasting, mucking out, , and backfill—that could be removed to enhance efficiency and productivity while also lowering costs.

A bottleneck analysis depicts links in a mining site's value chain, enabling managers to identify capacity constraints for the entire production process. In simplest terms, the analysis reveals the process with the lowest capacity (the bottleneck) within the production processes under consideration. Such models are useful because they help managers identify opportunities to improve overall system capacity, recognising that bottlenecks in mining often move. Models also help managers avoid making unnecessary investments in non-bottleneck areas. Any increase in capacity at a bottleneck leads to an increase in throughput within the entire production process. Indeed, understanding and actively managing bottlenecks is one hallmark of a well-run mine.

To develop the DVO bottleneck analysis, the team identified all the links in the site's value chain and analysed process flows within each link. It then identified key throughput drivers (such as drilling productive time, drilling time per hole, and number of holes per face) and depicted them as ‘driver trees'. Finally, the team closely examined the throughput driver trees—calculating capacity for each step in the production value chain and identifying steps that were bottlenecks (see figure 2, below). 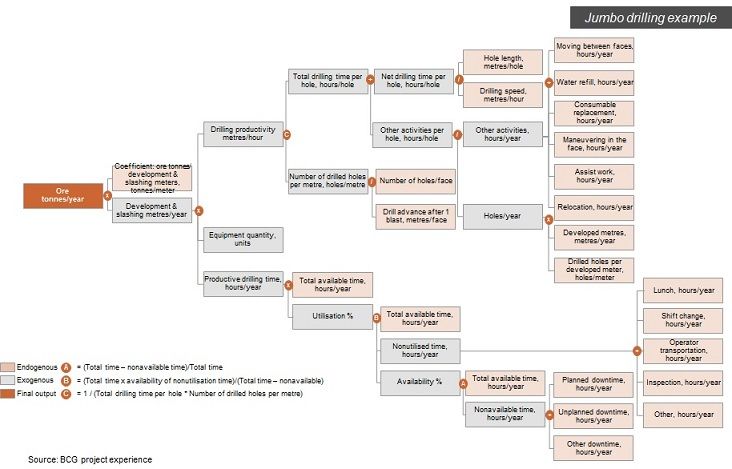 The analysis showed that the process of hauling ore from underground to the surface constituted a major bottleneck. This step offered the greatest potential for efficiency and productivity enhancement through more effective management of underground trucks.

Informed by this analysis, the team developed a number of improvement ideas—hypotheses that could later be tested with the dynamic simulation model.

After identifying the bottleneck, the team developed a simulation model to test the likely impact of individual improvement ideas. The model would also help team members gauge how bottlenecks might change in the future as DVO was developed further and as lower horizons were reached and haulage cycle times increased.

Inputs into the DVO dynamic simulation model included a survey wireframe to model underground tunnels and critical load, unload, and backfill locations; physical distances, speed limits, and equipment interaction rules; truck characteristics (such as speed and capacity); operational data such as shifts, delays, and downtimes; and equipment allocation settings. Outputs from the model included key operational metrics such as cycle times, cycles per shift, tonnes moved, queuing and time lost, and equipment availability and utilisation. These outputs were generated by the model after thousands of independent simulations of the process of moving ore from underground to the surface—simulations that were performed in just a few seconds.

After using the simulation model to test improvement ideas, the team identified the most promising among them. These were ideas that were most likely to improve the underground trucks' productivity and hence contribute the greatest increases to DVO's output and profitability.

For example, analysis of the simulation results suggested a more efficient way to organise routing of the underground trucks. Previously, underground trucks had encountered ‘traffic jams' requiring rerouting of some trucks to allow others to pass. The problem had resulted in a lower cycle time. The new routing scheme would reduce the frequency of jams, enabling trucks to make more trips per shift and thus transport more ore.

Simulation also helped team members define the optimal number of trucks that should be used to muck out stopes. This insight gave mine managers a tactical instrument for optimising underground truck productivity and decreasing queuing time in each stope, depending on its level and distance from the surface. The result was a 30-40% decrease in average queuing time per shift.

The simulation model also generated insights on how changing the haulage distance travelled by LHD machines between stopes and truck loading spots would affect utilisation and queuing time for all trucks working in each stope. Simulation results revealed that whenever distance exceeds 200 metres, truck utilisation drops by as much as seven percentage points (depending on the number of trucks doing haulage as well as the applicable inter-level distances).

Similar use of bottleneck analysis and dynamic simulation modelling can help miners identify and better manage bottlenecks in any of their mission-critical processes. Yes, building and running simulations takes careful thought and time. But for miners seeking to achieve excellence and next-generation improvements in their operations, dynamic simulation modelling constitutes a powerful tool.

*Vojtech Kacena is a partner and managing director (Kacena.vojtech@bcg.com), Andrei Navitski is a principal (Navitski.Andrei@bcg.com), and Nikita Popov (Popov.Nikita@bcg.com) is a consultant, at The Boston Consulting Group.

Kinross to add to Russia portfolio

Agrees to acquire Chulbatkan for US$283 million