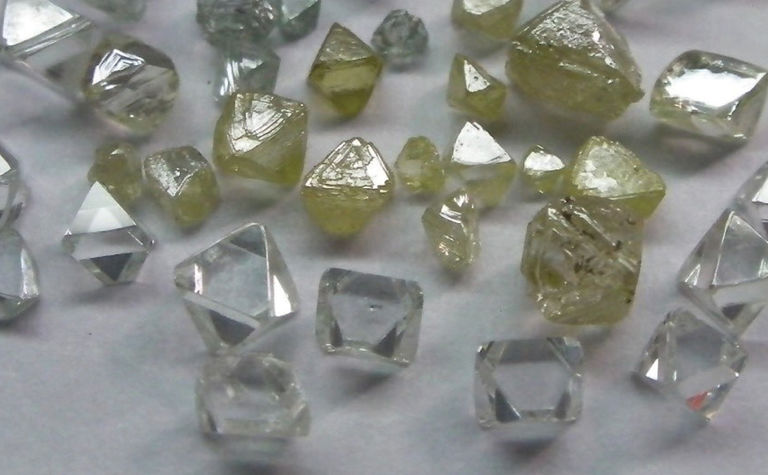 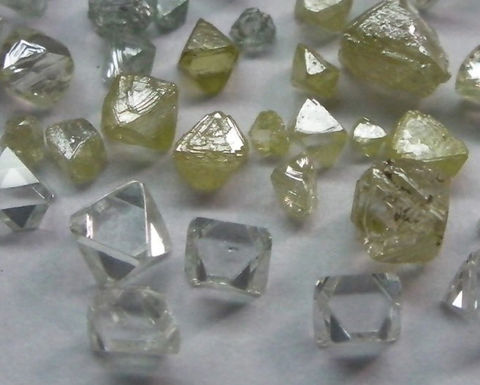 Diamonds from the Tongo project recovered during sampling in 2012

Early in 2018, ASX-listed Newfield Resources (NWF) merged with Stellar Diamonds, a company listed on the London Stock Exchange (AIM), and raised fresh equity of A$40 million to fund the accelerated development of the high-value Tongo diamond project in eastern Sierra Leone.

The projects consolidated by the merger are situated in the major diamond producing areas of Sierra Leone and Liberia, with the primary asset the high-grade Tongo project comprising two adjacent mining licences that cover more than 134 square kilometres and host 11 known kimberlites.

Newfield also holds a 100% interest in the Allotropes Alluvial Diamond Project on the Sewa River in the Southern Region of Sierra Leone, and a 90% interest in exploration licences in northwestern Liberia, where highvalue diamonds and kimberlitic indicator mineral anomalies were delineated by previous exploration work.

Newfield's Tongo development plan will be focused on achieving an underground mining operation on two of its 11 diamondiferous kimberlites by the latter part of 2019.

The development and mining phases of the Tongo project will involve significant employment and training opportunities for the local community. The project is regarded as a generational asset with significant potential for further discoveries and expansion of its mineable resource. To date, over US$49 million has been invested in exploration, scoping studies and governmental approval processes on the project.

The front end engineering and design programme (FEED) for Tongo started in the March 2018 quarter and is being co-ordinated by independent consulting groups, Paradigm Project Management and SRK Consulting. The FEED will more precisely define the technical requirements of the project and deliver an optimised underground mine design and treatment plant layout. This work will also refine the final capital expenditure estimate and operating cost budgets.

The mine is targeted to enter production in late 2019. The FEED programme is on track for completion in the December 2018 quarter.

Activities completed to date include:

Boart Longyear was appointed to undertake a 10,000m mine development drilling programme to complement the FEED. Drilling was completed during July 2018.

This campaign was designed to more precisely delineate the geology and morphology of the Kundu, Lando and Tongo kimberlites (and associated country rock) within the first two levels of planned underground mining. It is also expected to bring a fourth kimberlite dyke (Kpandebu) into resource. This will facilitate more precise mine planning and thus assist in de-risking the initial phases of mining. The drill collars are at approximate 50m intervals along the strike of the dykes, infilling previous resource drilling work that was at 200m intervals.

Independent geological consulting group, MPH Consulting of Canada (MPH), has been retained to update the mineral resource estimate for the Tongo Project. The additional geological information provided by the current drilling campaign is expected to bring some shallow portions of the previous resource into the indicated resource category, and to bring some previous Exploration Target zones into the Inferred Resource category.

The updated JORC-compliant mineral resource estimate is expected to be completed in the December 2018 quarter.

Alluvial diamonds were mined at Tongo from 1956 to 1995, initially by Sierra Leone Selection Trust (to 1971) and subsequently by the National Diamond Mining Company. Work by the Sierra Leone Geological Survey in the 1960s and 1970s estimated that 1.6 million carats were produced in the first 10 years. However, it is estimated that up to 4.5 million carats were mined subsequently. Today, artisanal miners still produce diamonds from remnant alluvial deposits in the vicinity of the kimberlite sub-crops. But the kimberlites themselves were only mined to a few metres depth in the weathered zone, and are therefore virtually untouched. 

Delineation and resource drilling of select kimberlite dykes, in combination with microdiamond and bulk sampling, was carried out by Tonguma Ltd and Stellar Diamonds plc between 2011 and 2012. This data along with the recently completed shallow drilling programme (to approximately 100m), is being incorporated into an updated mineral resource estimate.

Grades reported during the sampling programmes ranged between 0.8 and 2.7 carats per tonne, and the average diamond values were modelled at between US$197 and US$270 per carat. There are a further eight dykes that have been discovered to date, and all of those tested are diamondiferous. All of the dykes are open at depth. Currently operational kimberlite dyke mines in South Africa continue to operate at below 700m depth.

Newfield's development plans for the Tongo project will see the creation of another substantial mining operation in Sierra Leone.

With strong support from local communities and government agencies, Newfield will forge an effective partnership among all stakeholders. Objectives include development of a long-life mining operation that will generate sustainable returns as well as provide significant economic benefits to Sierra Leone and its local communities.

Newfield's management team has over 150 years of combined experience in discovering and developing diamond mining operations.

The core values and culture of Newfield drive application of the best standards of technology, safety and environmental practices. Above all, we believe in treating our host country, its people and its lands with the utmost respect.