Three years after the mainstream mining world went mad for lithium, the new crop of developers has caught up to those companies riding the initial wave. But they are doing it their own way. TSXV-listed Neo Lithium is developing a brine project in the Argentinian Andes.

The recent prefeasibility study for the 3Q project outlined a 20,000 tonne per annum lithium carbonate equivalent project that will cost $319 million to build.

That supply will be feeding into a rapidly expanding market: Benchmark Mineral Intelligence forecasts lithium demand to grow by a factor of nine in the next decade.

Further downstream, the capacity of battery factories planned for 2019-2028 has grown 230% since 2017, meaning in the past two years manufacturers have upped their electric vehicle forecasts for the next decade by 23 million cars.

The forecasting firm says about 70% of the projects should actually get off the ground.

The biggest part of the initial cost is building the 409-hectare evaporation bonds and wells, at $128 million.

The project will then run at a life-of-mine cash cost of $2,914 per tonne.

For comparison, Orocobre reported a cash operating cost of $4,251/t in the six months to December 31, although this did not include administrative costs, and Galaxy Resources' Sal de Vida has an estimated LOM cost of $3,144/t after potash credits.

"Because our project has very low impurities, we use less reagents than other companies," he said.

"It's a direct relationship between the reagents that you have to buy, and then they will have to include that in the operating cost."

Pindar said Neo Lithium also had the advantage of seeing where other brine developers and producers had gone wrong.

"In terms of ramp up, we've learned from the mistakes of the others … so we have a full two years and a half before we achieve full production," he said.

"It could be done faster, but we think it's the time our engineers and processing team need to fine-tune the process.

"With very low contaminants and the right process, you can take this into production with a good level of certainty."

Neo Lithium research shows its project has the lowest combined sulphate and magnesium content of any brine project, including major ones like SQM and Albemarle's Atacama operation and fellow prospects like Galaxy Resources' Sal de Vida and LSC Lithium's Pozuelos.

The grade is also a positive for the project, with the reserve at 790 milligrams lithium per litre.

The PFS outlines an average grade of around 1,080mg/L lithium for the first 10 years of production. 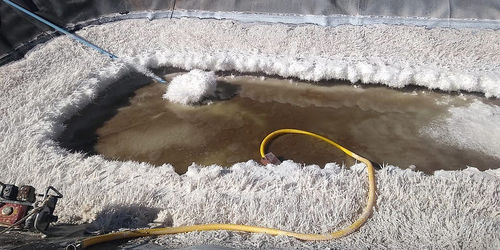 Between the preliminary economic assessment last year and the PFS released recently, the company cut annual production 40% to 20,000tpa, which Pindar said would make it easier to finance for the first phase, with later cash flow-driven expansions still on the cards.

The project's life also stretched out from 20 years to 35 years.

It has not escaped Neo Lithium's notice project funding is not so easy to come by these days.

On top of the subdued equities market, potential offtakers are having to balance out the deals they signed when lithium was over $20,000/t.

Pindar said Neo Lithium was looking for a cashed-up partner to help get 3Q into production.

"What we're looking for is a JV partner for a holistic solution that provides financing for 100% of the project with objective of avoiding company equity dilution," he said.

The industry is a hive or activity currently: Ganfeng Lithium has just upped its stake in Lithium Americas' Cauchari-Olaroz project from 37.5% to 50% this month for $160 million, and Livent has recently signalled its M&A ambition for brine and hard rock projects.

The company's chairman is also very experienced in dealing with Chinese partners, in addition to also serving on the Lithium Americas board - it is Molycorp founder Constantine Karayannopoulos.

Potential investors can also look to the shareholder register for encouragement, with strong institutional investors like BlackRock and JPMorgan joined by management with large holdings.

"It is important for the shareholders to understand [management and the directors] are still the owners of at least 14-15% of the company," Pindar said.

"The decisions that we make are very much oriented to maintaining value for shares and the shareholders."

Round II for Perez

Neo Lithium can take a more considered approach to developing 3Q, compared to developers racing to production, because of CEO Waldo Perez's experience.

He founded Lithium Americas in 2009 and ran it until 2013, and was previously was the CEO of Latin American Minerals Corp and project generator manager for Barrick Gold and IAMGold.

The expertise goes beyond identifying the deposits.

"[Perez] built the pilot plant and defined the process that Lithium Americas is going to use today, including co-authoring the patent for a portion of the lithium extraction process," Pindar said.

"When we discovered [3Q], Waldo was very eager to start working on the pilot ponds and pilot plants, because he knew that would be the bottle neck for us to get into final production."

That process will be further defined next year, when Neo Lithium completes the feasibility study for 3Q.

There's no point mining all this lithium if there are no buyers.

While the Benchmark numbers make a convincing case for growing demand, there has also been a strong uptick in production from hard rock producers in Australia.

There's also the added complication of the lithium carbonate/hydroxide divide, which means brine product needs another processing step to get into the NCA batteries used by Tesla and the NCM 811 battery on the cards if cobalt supply isn't secured.

Pindar said this would still not be enough, and the carbonate hopefuls like Neo Lithium also had the combination of the next stage of lithium-ion to look to.

"To go to solid state batteries, you will start from lithium carbonate to go to lithium chloride," he said.

"It's more costly to go from lithium hydroxide to lithium chloride, just because of the basic chemistry."

But carmakers are notoriously slow-moving (even in this new EV world) and this technology is still unproven at a commercial level.

Fortunately, carbonate is also usually in the batteries with chemistry in between the older-style 111 NCM technology and the cobalt-cutting 811.

In any case, with the eightfold demand increase forecast, lithium will be in high demand coming into the 2020s.

"You have the two demands that are growing - the energy storage demand, then the cars," Pindar said.

"Of the car manufacturers, we see in some of the expert reports, demand is growing really fast, and we have reports of around 15 battery factories being ready at the moment, and 41 factories under construction.

"[Meanwhile] we are seeing a delay in increasing the supply side. While the demand is growing very steadily.

"It should be creating a lot more tension."

That tension should create plenty of opportunities for a low-cost, funded lithium developer with the right expertise in management.

Recent share price run must be treated with caution