Hudson Resources (TSXV: HUD) has loaded the first bulk shipment from its White Mountain anorthosite mine in Greenland as both the country and the company’s projects garner US attention. 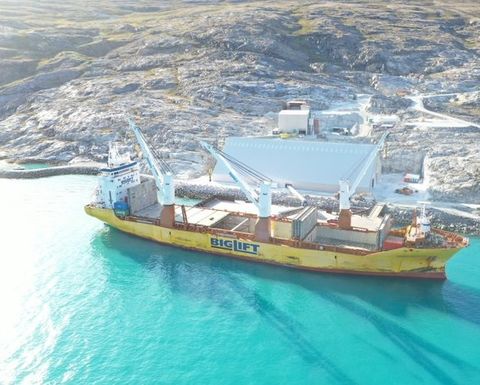 US president Donald Trump this week postponed a meeting with Denmark prime minister Mette Frederiksen after hearing she had no interest in discussing the idea of the US purchasing Greenland.

The US has become "quite active" in Greenland, Hudson president Jim Cambon noted earlier this month, as issues around Arctic sovereignty and strategic mineral resources come to the forefront.

He said Hudson had hosted a US state department visit at its calcium feldspar mine in July and also discussed the company's Sarfartoq rare earth elements project in Greenland "and our joint desire to see this project advanced".

White Mountain's first bulk shipment is carrying about 14,400 tonnes of GreenSpar 250 anorthosite product and 56t of GreenSpar 90 (98% finer than 90 microns) to its port facility in South Carolina.

The company said the GreenSpar 90 material would be used in further development of the paints and coatings markets and CO2-free cement applications.

Cambon, who was appointed to the role earlier this year, said the company used the downtime in the plant to install new secondary crusher components as the original motors and gearboxes were the wrong size.

The replacement cost was covered by the vendor and load testing was expected to take place in the next week, the company said.

Hudson closed the third tranche of additional debt financing last week, with the US$3 million to be used for ramping-up production, shipping, working capital and general corporate purposes.

The company is planning to hold an officially opening of its White Mountain mine on August 28.